This website requires the use of Javascript to function correctly. Performance and usage will suffer if it remains disabled.
How to Enable Javascript
Study: National Wealth Does Not Equal Good Health 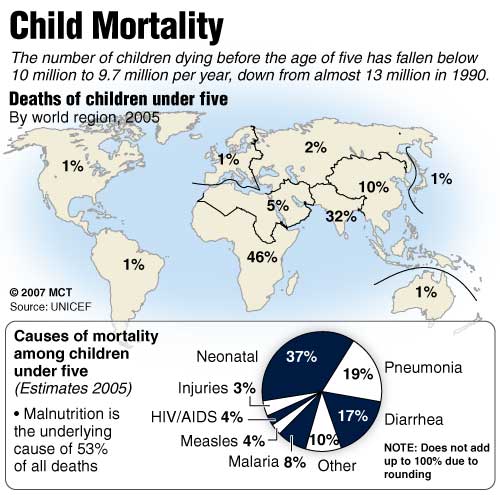 Economic growth does not translate into higher health standards for children, a new study shows. According to the report “Saving Children’s Lives,” by the nonprofit organization Save the Children, the combination of squandered resources in conflict zones and poorly funded health programs exacerbates the situation.

“Sub-Saharan Africa has only 11% of the world’s population but accounts for nearly half (nearly 4.8 million) of total deaths worldwide, while South Asia accounts for around 3.1 million child deaths,” the report said.

Nearly 99% of the almost 10 million children who die before their fifth birthday live in developing countries. Although some of these countries are resource-rich, capital is often controlled by a small ruling elite, making common disease prevention methods and natal care inaccessible, the report states. A baby’s health is directly tied to the mother’s living conditions. This often determines if her baby will survive the neonatal period (the first 28 days of life).

Even with advances in care, 14 countries saw an increase in child mortality.

Analysts link conflict-torn areas with deprivation of resources. Countries with higher child mortality rates tend to be very poor and have experienced war or violent conflict, such as Afghanistan, Angola, Chad, the Democratic Republic of Congo (DRC), Liberia and Sierra Leone.

Surprisingly, of the 41 nations surveyed, India had the highest number of children’s deaths in 2006. Although it is considered a growing superpower, India accounts for 25% of the world’s total newborn deaths.

The report blamed India’s high numbers on its caste system, which prevents poor families from improving their living standards.

“There is huge inequality within India—of the two million children that die needlessly in the country every year, 60% are living in just five of the country’s 28 states,” Shireen Miller, director of policy for Save the Children India, stated in The Times of India. “There is a real need to examine how children are looked at in a country that allocates less than 5% of its GDP to children, despite the fact they make up almost 40% of the population.”

In addition, the report claimed that India, Nigeria, DRC, Ethiopia, Pakistan and China “account for 50% of all deaths of children under five.”

On the “Wealth and Survival” index, China ranks just six countries ahead of Uganda, demonstrating that while the Chinese economy continues to grow at a tremendous rate, the nation’s children are being left behind.

“When children die young, are stunted or otherwise damaged by under-nutrition, or suffer prolonged ill-health, this has seriously negative implications for the development prospects of these countries,” the report said. “Stunted children grow up to be shorter, weaker and less healthy adults, achieve less at school and earn less over their productive lives. They are also more likely to have children who are chronically sick, perpetuating poverty and disadvantage across the generations.”

Despite the seemingly bleak statistics, the numbers have actually been halved since 1960 when deaths of children under five topped 20 million. Since then, more money has been funneled into preventive measures and vaccinations, which have contributed to the drop.

Regardless of the advances, David Mepham, the UK’s Save the Children director of policy, acknowledged that the country a child is born into will most likely determine if he or she will survive the first five years of life.

“A child’s chance of making it to its fifth birthday depends on the country or community it is born into. This sounds like a lottery, something beyond human control, but this should not be the case. While poverty and inequality are consistent underlying causes of child death, all countries, even the poorest, can cut child mortality if they pursue the right policies and prioritize their poorest families. Good government choices save children’s lives but bad ones are a death sentence” (Reuters).