This website requires the use of Javascript to function correctly. Performance and usage will suffer if it remains disabled.
How to Enable Javascript
Pakistan Election Bolsters Democratic Hopes 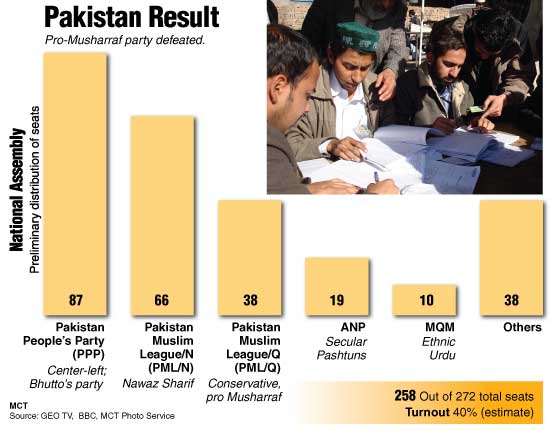 Pakistan’s parliamentary elections have resulted in the late Benazir Bhutto’s Pakistan Peoples Party (PPP) and Nawaz Sharif’s Pakistan Muslim League (PML-N) parties coming out on top—with President Perez Musharraf’s party losing its majority hold on the parliament. This could signal a change in direction for the nation and how it interacts with Europe and the United States.

Celebratory gunfire, firecrackers and cries of victory filled the streets of Pakistan’s cities as the results came in: The PPP garnered 87 seats and the PML-N 66. Together, the two groups gained the majority of the 268 contested seats. However, official results will not be declared until March 1.

Turnout was around 40%, which was high considering the 40 deaths attributed to political violence the weekend before the election. Also, in recent years, polling stations have become a choice target for suicide bombings, leading many to forego voting.

The results appear to have restored some faith in the democratic system for Pakistan, which has seen years of rule by military strongmen and other leaders. Allegations of rigged elections are also commonplace.

Despite a longstanding rivalry, the PPP and PML-N have begun talks to form a coalition against the current president. Together, it is likely the groups will work to restore power to the parliament and reverse changes made to the nation’s constitution by Mr. Musharraf. They will also have to deal with rising prices and Islamic extremism.

The vote was under intense scrutiny by the media and foreign governments, partially due to the recent assassination of Ms. Bhutto, with official representatives from the EU and the U.S. Congress observing the polling process.

Most nations have declared the elections fair and see the results as encouraging. A statement from EU observers called the vote “positive on the whole,” though some “procedural irregularities were noted.”

U.S. State Department spokesman Tom Casey said, “Certainly we would want the election results to be respected by all parties,” also stating that it is “clear that Pakistan has taken a step toward the full restoration of democracy.”

Without Mr. Musharraf in control of both the presidency and parliament, there are fears that the U.S. may lose a critical ally in the war on terror. Since 2001, the U.S. has poured $10 billion into Pakistan’s military program, which shares its borders with Iran, Afghanistan, India and China.

Others in the U.S. government see this as a chance to strengthen ties with Pakistan. Chairman of the U.S. Senate Foreign Relations Committee, Senator Joseph Biden, one of the U.S. representatives observing the election, called the results “an opportunity for us to move from a policy that has been focused on a personality to one based on an entire people” (AP).