This website requires the use of Javascript to function correctly. Performance and usage will suffer if it remains disabled.
How to Enable Javascript
What to Watch in 2007

As the World Rings in a New Year…What Will the Coming Months Bring? 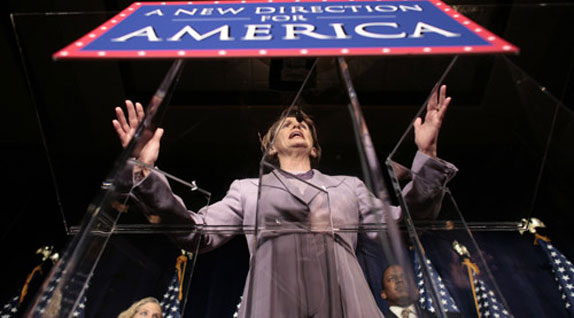 MCT
Politics, war and religion: Congresswoman Nancy Pelosi (D-CA) will be sworn in as the first female Speaker of the House of Representatives on January 4.

It is the year the European Union turns 50. America commemorates the 400th anniversary of its first settlement in Jamestown, Virginia. Finland hands the EU presidency to Germany for six months. The League of Arab States gathers in Cairo for its annual summit in March, and, as of January 1, Romania and Bulgaria are official members of the EU.

The year 2007 promises to be an eventful one. But what lies ahead? Human beings are not capable of telling or predicting the future—but there is a Source that can!

Nearly 2,000 years ago, Jesus Christ came as a newscaster, bringing advance news of future events. In the Bible, He describes trends, problems and world conditions of our time now—just prior to His Return: “When you shall see all these things, know that it [Christ’s Second Coming] is near, even at the doors” (Matt. 24:33).

As a newscaster of future events, Jesus said that religious deception would grow worse. Notice: “Take heed that no man deceive you. For many shall come in My name, saying, I am Christ; and shall deceive many” (Matt. 24:4-5). While there have been false Christs throughout the centuries, this verse also applies to the many who falsely claim to speak on Christ’s authority. Thousands, even millions, are falling prey to this religious deception—and this will only continue.

Some Protestant churches now allow women in the ministry; others do not. Others permit homosexuality among their leaders and members; some allow this to varying degrees. Many churches and denominations foster a “come as you are” attitude, allowing people to attend religious services wearing just about anything; other churches are stricter. Of the countless denominations, churches, groups and religious organizations professing to be “Christian,” how can these divided and competing churches all speak for Christ? Is Christ divided among them?

As the Protestant world grapples with changing standards and megachurches continue to grow, the Catholic Church is working to unite professing Christianity under its lead. Recently, Pope Benedict XVI traveled to Turkey to meet with various religious and political figures to ease relations between the Vatican and Islam, as well as Rome’s relationship with Orthodox Christians. Will the Orthodox and Catholic churches reunite?

Wars and Rumors of Wars

Continuing in Matthew 24, Jesus Christ addresses growing levels of violence in this age: “And you shall hear of wars and rumors of wars…For nation shall rise against nation, and kingdom against kingdom” (vs. 6-7). In a parallel account in Luke 21, He stated, “But when you shall hear of wars and commotions, be not terrified: for these things must first come to pass” (vs. 9).

When a suicide bomber blows himself up in a crowd, it could easily be described as a “commotion.” Terrorism will become more common! 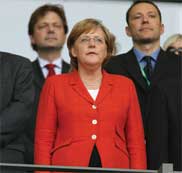 MCT
German Chancellor Angela Merkel is set to take control of the EU presidency in January, as well as the presidency of the G8 summit, held in Heiligendamm, Germany, this June.

Although war has always existed in man’s history, Jesus forecasted that violence would increase just before His Return. Thus, the world will not be safer in 2007. Wars—genocide—terrorist acts—crime—riots—these will all increase. Nuclear programs and militaries are expanding. Iran and North Korea show no sign of discontinuing their nuclear ambitions. Iran is gearing up for war against Israel, as its president frequently calls for the Jewish nation’s destruction.

The year will not see worldwide violence diminish.

Recall Jesus’ statement, “For nation shall rise against nation, and kingdom against kingdom” (Matt. 24:7). This is happening around the world. Governments and world leaders continue to make threats of war. Some world leaders openly threaten the annihilation of other nations. Nations are rising against nations.

Conflicts in the Middle East will only grow worse. A solution for peace will not be found—at least not by the hands of men. With a full-scale civil war looming in Iraq, the region is racked with violence and almost daily insurgent attacks. The Western-backed democracy in Lebanon teeters on the brink as the terrorist group Hezbollah threatens a coup.

Jesus continues: “And then shall many be offended, and shall betray one another, and shall hate one another…And because iniquity shall abound, the love of many shall wax cold” (vs. 10-12).

With the dramatic political shift resulting from the 2006 midterm elections, America is more politically polarized than ever. Many who ran for office revealed they were more than willing to slander, attack and backbite their opponents at virtually any cost.

How will this affect American foreign policy and the way the U.S. is viewed by its allies and enemies? With anti-Americanism on the rise, will it fuel more hatred for America? Or will America be able to come together with other nations for the “common good”?

No longer viewed as the military power it once was, the United States is gradually losing its status as the world’s lone superpower. Who will fill the void? China?—Russia?—India?—or will a rising united Europe take the lead?

In 2007, the European Union welcomes two new member states—Romania and Bulgaria. The list of potential EU members includes Croatia and Turkey, although Turkey’s accession process is being delayed due to its majority Muslim population, and the fact that it does not recognize Cyprus, another EU member state.

With the European Union celebrating in Berlin its 50th anniversary of the signing of the Treaty of Rome, 2007 looks to be a year when Europe is steered mostly by Germany. The once divided nation is set to take control of the EU presidency in January, as well as the presidency of the G8 summit, held in Heiligendamm, Germany, this June. Ms. Angela Merkel, Germany’s Chancellor, will use her EU Presidency to attempt to resurrect the stalled constitution.

Will Germany be able to overcome the political gridlock now plaguing the EU? What lies in Europe’s future? And with a German pope leading the Catholic Church, what role will Germany play in dealing with Europe’s integration of millions of Muslims?

Jesus Christ also warned, “…and there shall be famines, and pestilences, and earthquakes, in [various] places” (Matt. 24:7). Earthquakes are increasing—and occurring in strange places. Storms are becoming more violent and happening more frequently. Reports of flooding are common. Violent tornadoes are increasing, and occurring at unusual times of the year. Drought is already seen in prosperous nations of the West, such as Australia and the United States. 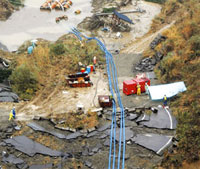 MCT
DROUGHT AND NATURAL DISASTERS: Floods will continue to damage the land, while, in other areas, drought will devastate agriculture.

“Pestilences,” or diseases, will grow worse and spread. For instance, AIDS is predicted to become the third-leading cause of death worldwide.

Drought leads to widespread food shortages, which will lead to global famine. Millions around the world are already starving from lack of food. Despite man’s best efforts, relief agencies will not be able to halt the prevalent starvation foretold to occur.

Jesus Christ said that our time would match the rampant immorality that existed in Noah’s day, just prior to the Great Flood (Matt. 24:37). This is described in Genesis 6: “And God saw that the wickedness of man was great in the earth, and that every imagination of the thoughts of his heart was only evil continually” (vs. 5).

This could only be described as a time of great depravity and moral corruption—and it is now happening again! The family unit—the nucleus of any stable and thriving society—is breaking down and being redefined, as same-sex couples are becoming increasingly accepted as the norm. Immorality is increasing. The killing of unborn children is socially accepted and widely practiced. Illegitimate children are left to be raised by single parents, often due to divorce or being born out of wedlock. In the U.S., 9 out of 10 singles in their twenties are no longer virgins. Also, the number of people divorced is higher than those who are married, often the result of adultery.

Sadly, the rampant immorality and degeneration of character seen around the world is prophesied to continue. Where will all this lead?

Hope on the Horizon

The future of the world looks grim and hopeless. Religious confusion, violence, global famines, deadly diseases, wars and commotions will increase; 2007 will bring more of the same.

However, there is hope!

Along with outlining the conditions, trends, troubles and problems of this age, Jesus Christ added this: “And this gospel of the kingdom shall be preached in all the world for a witness unto all nations” (Matt. 24:14). The word “gospel” means “good news.” At His Return, Christ will set up a divine supergovernment that will usher in lasting peace and prosperity throughout the world: “Of the increase of His government and peace there shall be no end” (Isa. 9:7)! Every nation, territory, city, town, suburb and household will benefit!

As world events unfold, this magazine—The Real Truth and its website (rcg.org/realtruth)—will continue to analyze news, trends and conditions from a unique, biblical perspective, as it announces the good news of the soon-coming kingdom of God.