This website requires the use of Javascript to function correctly. Performance and usage will suffer if it remains disabled.
How to Enable Javascript
Gerald R. Ford: A Different President, A Different Generation

The death of President Ford is a reminder that America is losing strong leaders from the past and is adrift without a moral compass, headed for an uncertain future. 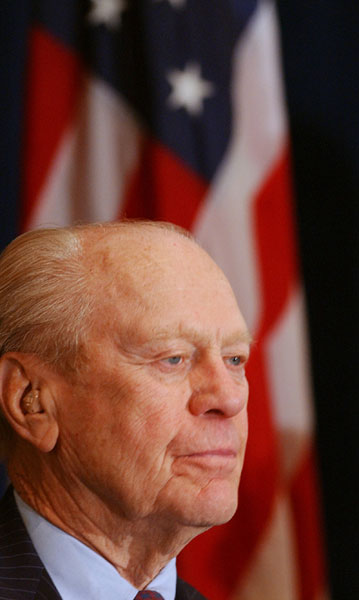 He took on responsibilities he did not seek, accepting an office whose image was tarnished. He put the needs of the country before personal interests, sacrificing his political future. In return, he was attacked, ridiculed and largely unappreciated.

Only now, upon his death, has Gerald R. Ford, 38th President of the United States, received the high praise and appreciation that was missing during his brief term in office.

An unusual leader is gone.

Mr. Ford was born into a bad marriage, which quickly ended in divorce. His mother remarried, providing Mr. Ford a stepfather he came to call “a magnificent person.” Born July 14, 1913, in Omaha, Nebraska, Mr. Ford spent most of his childhood in Grand Rapids, Michigan, where he was reared with Midwestern values.

There he joined the Boy Scouts, rising to its highest rank, Eagle Scout, which he considered one of his greatest accomplishments, even after he had become President.

A star athlete in high school and college, Mr. Ford attended the University of Michigan, playing football for a team that achieved undefeated seasons and national titles. He turned down NFL offers from the Detroit Lions and Green Bay Packers to further his education at Yale Law School, graduating in 1941.

Joining the U.S. Naval Reserve the following year at the rank of Ensign, he served in the South Pacific during World War II, and later rose to Lieutenant Commander. Serving aboard the U.S.S. Monterey, an aircraft carrier, as director of physical training, gunnery officer and assistant navigator, he survived a typhoon that sank three other ships and killed hundreds of U.S. soldiers.

He returned to civilian life after the war, practicing law and, in October 1948, married Elizabeth (“Betty”) Bloomer Warren. The Fords went on to have four children: Michael, John, Steven and Susan.

Gerald Ford’s political career began with his election to the U.S. House of Representatives in 1948. For the next 24 years, he rose in prominence, receiving congressional appointments to the House Appropriation Committee and the Defense Appropriation Subcommittee. In addition, he served on the Warren Commission, which investigated the 1963 assassination of President John F. Kennedy. In 1965, Mr. Ford became the House Minority Leader, putting him on the path to fulfilling his goal of becoming House Speaker.

However, his career path took an unexpected turn. On October 10, 1973, Vice-President Spiro Agnew was forced to resign from office due to impending criminal charges of tax evasion and money laundering. This prompted the first time the 25th Amendment was invoked to fill a Vice-Presidential vacancy. Two days later, President Richard M. Nixon nominated Gerald Ford to assume the office. Mr. Ford—whose reputation for integrity was highly regarded among Republicans and Democrats alike—was confirmed by the U.S. Senate (92-3) on November 27, and was confirmed by the House (387-35) on December 6. During the years he served as Minority Leader, Mr. Ford gained many friends due to his leadership and gentle personality, which no doubt contributed to his overwhelming bipartisan support.

Several months later, Vice-President Ford experienced his next great unexpected course-change when, on August 9, 1974, Mr. Nixon resigned from the presidency as a result of the Watergate Scandal. Gerald R. Ford became the first person to become President of the United States without having been elected into the Oval Office.

Taking on a position he did not seek, President Ford inherited daunting issues from the previous administration that carried international, national and even personal implications:

• In the wake of the Yom Kippur War, Arab nations initiated an embargo of oil imports to nations that had supported Israel. This sent economic shockwaves across the West. The U.S. economy grappled with severe inflation—a result of the 1973 oil crisis causing businesses to raise prices, which in turn led to a recession. Jobs were lost at a time when the cost of living increased.

• Throughout the 1960s and early 70s, America fought an unpopular war in Vietnam. Countless deaths among soldiers and civilians—demoralizing nightly news reports—a venomous and growing chorus of protest movements—ill-fated military strategies devised through political maneuvering—these and other factors contributed to America’s disgraceful exit from Vietnam, culminating in the infamous Fall of Saigon on April 30, 1975.

• Continuing what started under the Nixon administration, Mr. Ford sought to relax international tensions with the USSR and China through détente—a difficult task, considering that the communist nations were emboldened by America’s humiliating defeat in Southeast Asia. Also, Mr. Ford suffered attacks from his own political party among those who feared he was too conciliatory.

• The President also suffered in private alongside his wife as she battled breast cancer and her addiction to alcohol and painkillers, which was connected to her severe neck pain. (After her recovery she established the Betty Ford Center for drug and alcohol rehabilitation.)

The escalating conflict in Southeast Asia, the assassinations of national leaders, mounting White House scandals and other issues gave birth to the cynical 70s—a time when the public image of the U.S. Presidency was forever tarnished. National morale was at an all-time low. But with President Nixon’s departure from the White House, civic leaders, citizens and the press initially saw the Ford Presidency as a breath of fresh air. All looked forward to a new beginning.

President Ford attempted to answer the call to heal the nation of its emotional wounds. Yet, despite restructuring a new administration (which included rising leaders such as Richard Cheney and Donald Rumsfeld), Mr. Ford made a historic—and widely controversial—decision to pardon Mr. Nixon. Many believe it was this that ended his run for the Presidency in 1976. Detractors claimed the pardon was a quid pro quo deal. Mr. Ford was even attacked by lawmakers in his own party because the pardon came just before the 1974 mid-term elections—resulting in an overwhelming political victory for the Democrats. Though he was able to veto 66 bills during his brief term, the Democrat-led Congress overturned 12 of Mr. Ford’s vetoes—more than any president since Andrew Johnson.

Few at that time could grasp or accept that the President made a courageous decision that put his nation before his own personal interests. His desire to heal the nation trumped his political aspirations. And no wonder, for Mr. Ford came from a different generation, one that had survived the Great Depression and the horrors of the Second World War, and the subsequent rise of anti-Western communist regimes and socialist governments. His was a generation that had learned the meaning of sacrifice and making tough, even very unpopular, decisions. Mr. Ford represented an era when people took personal responsibility, an age when leaders stood up for principle, regardless of how the outcome would affect them personally.

How many such leaders exist today?

Mr. Ford took on the mantle of leadership as the Baby Boomers came into their own—the decade of the “Me Generation,” which focused on the self. Reared on the idealism of the “Great Society,” it was this generation that first began to view the office of the President as a father figure that saw to the needs of the American citizenry, from “the womb to the tomb.” Future administrations arose from this generation that made important national decisions through opinion polls rather than with courage.

Mr. Ford was derisively called “the accidental President,” partly because of the manner in which he assumed the highest office in the nation—and partly due to a few occasions when he accidentally fell or stumbled, televised for all to see. The public did not understand that a nagging knee injury from his football years may have contributed to his imbalance. He became the butt of mean-spirited “jokes,” a caricature to be lampooned. His presidency was largely unappreciated and underrated.

Yet today Gerald R. Ford is hailed as a man who “brought us together,” a “uniter” who stepped out in courage, a man of “Midwestern values” of “warmth,” “leadership” and “integrity.” He titled his memoirs A Time to Heal—but after 30 years America is not healing. On the contrary, the nation has become increasingly polarized, suffering from festering wounds that can never be healed by human hands.

Today, calls for sacrifice fall on deaf ears. Leaders who dare to stand on principle are crushed under relentless criticism, toppled over by the weight of public opinion, and pushed aside when their services are deemed no longer needed. The result? A vacuum in character and strong, moral leadership.

The Real Truth magazine analyzes the effects of the issues, trends and troubles plaguing mankind—restores plain understanding to the causes behind humanity’s ever-increasing problems—and points to the only real solution. In short, we announce the gospel—the “good news”—of the soon-coming kingdom of God!

Therefore, The Real Truth does not take political positions, nor side with or against men’s governments or leaders. Our position is strictly neutral.

If you would like to learn more, read our booklet Which Is the True Gospel? and our book Tomorrow’s Wonderful World – An Inside View!

Nature abhors a vacuum. Over the years, values such as courage, self-sacrifice and taking personal responsibility have been replaced by situational ethics. For the avid Bible student, this should be of no surprise since this was foretold of our age long ago.

Notice: “In you have they taken gifts to shed blood; you have taken usury and increase, and you have greedily gained of your neighbors by extortion, and have forgotten Me, says the Lord God” (Ezek. 22:12). How many times have we seen government and industry leaders financially profit at the expense of the average citizen?

“The people of the land have used oppression, and exercised robbery, and have vexed the poor and needy: yes, they have oppressed the stranger [alien] wrongfully” (vs. 29). How many times have we seen the rich and powerful use the law to their personal advantage at the expense of the poor and helpless?

Of America and her sister nations of the West, God laments, “And I sought for a man among them, that should make up the hedge, and stand in the gap before Me for the land, that I should not destroy it: but I found none” (vs. 29-30).

Where are such leaders today?

President Gerald R. Ford was a different president, from a very different generation, with different character. His death, alongside the deaths of President Ronald Reagan and other statesmen, is yet another reminder that America is adrift without a moral compass, headed for an uncertain future…