This website requires the use of Javascript to function correctly. Performance and usage will suffer if it remains disabled.
How to Enable Javascript
What Next for Post-War Israel?

What Next for Post-War Israel?

Israel waged a 34-day war in Lebanon against Iranian- and Syrian-backed Hezbollah. In the aftermath, what lies ahead for the Jewish state? 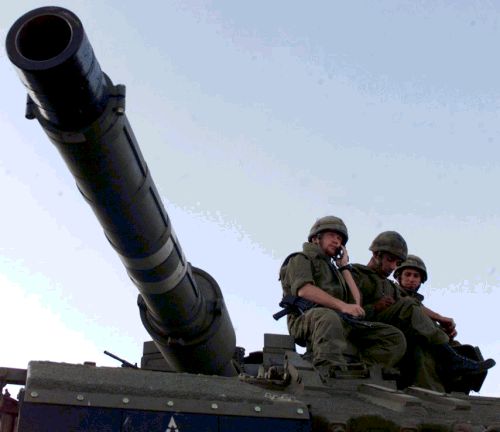 MCT/Flash 90
WAR IN LEBANON: The 2006 Israel-Hezbollah conflict marked the first time in history that the state of Israel did not achieve a clear and decisive military victory over its enemies.

And then on July 12, 2006, with the incursion into Israel by a Hezbollah unit that captured two Israeli soldiers and killed three, the Second Lebanon War began.

While the Israeli-Hezbollah War was comparatively minor, the potential implications are not. In addition, some believe this conflict to be another part of the greater, intensifying “clash of civilizations” that began on 9/11.

The War and the Aftermath

On the heels of having a soldier captured by Palestinian terrorists in Gaza, five Israeli soldiers were killed on July 12. Attempting to rescue fellow soldiers, another five died. Israel blamed Beirut, citing that the original raid was carried out from Lebanese territory and that the Lebanese cabinet included two Hezbollah ministers.

With Russian-made Katyusha and other rockets raining down on northern Israeli cities that same morning, Israel responded with artillery and air strikes. By the next day, Israel had bombed the Beirut International Airport and the main Beirut-Damascus highway, and imposed an air and sea blockade against Lebanon. On July 23, Israeli land forces crossed into Lebanon, bent on eliminating Hezbollah rocket launch sites.

In addition to firing rockets at northern Israel, Hezbollah, a Lebanese Shiite militia, was able to destroy several Israeli tanks, disable the INS Hanit, a Sa’ar 5-class missile boat (built by Northrop Grumman), and ultimately kill over 100 Israeli soldiers. Israeli newspaper Haaretz reported that Hezbollah was a trained, skilled, well-organized, highly motivated infantry that was equipped with the cream of the crop of modern weaponry from the arsenals of Syria, Iran, Russia and China.

On August 11, the UN Security Council approved Resolution 1701 in an effort to end the conflict. It demanded the disarming of Hezbollah, the full control of Lebanon by the government of Lebanon, and no paramilitary forces in Lebanon south of the Litani River. Beirut, Hezbollah and the Israeli government agreed to the resolution, and a cease-fire took effect on August 14.

However, the conflict accomplished little, if anything at all, and likely exacerbated an already extremely difficult situation. According to one senior Lebanese cabinet minister, the two Hezbollah cabinet ministers made it clear just prior to the cease-fire that Hezbollah had no intention of disarming and/or giving up their positions in southern Lebanon. In addition, both the Lebanese government (which deployed its troops to the south) and the UN indicated that it was not their intention to force Hezbollah to disarm.

More recently, Israeli Prime Minister Ehud Olmert has invited Lebanese Prime Minister Fouad Siniora to begin peace talks, while at the same time ruling out the possibility of similar talks with Syria. This is the second invitation from Israel. Shortly after the war, Mr. Siniora rejected similar calls by Mr. Olmert, and said that Lebanon would be “the last Arab country that could sign a peace agreement with Israel.”

Immediately after the fighting ended, both sides and their supporters claimed victory, although many ultimately began to question Israel’s difficulty in accomplishing its military and security goals. The Economist concluded that Hezbollah had emerged with a military and political victory simply by surviving the conflict. Many editorials in Western papers began to question the supposed invincibility of the Israeli Defense Forces.

On September 22, approximately 800,000 Hezbollah supporters gathered in Beirut for a victory rally.

Meanwhile, the Swiss-based International Relations and Security Network reported that the political shift in Israel appears to be toward the right, and that if an election were held today the Likud party would return to power. (Though led by Benjamin Netanyahu, the leadership of Likud is likely still subject to a primary vote before any national election.)

The Media and International Opinion

When the conflict began, international opinion was largely along typical lines: the governments of the United States, the United Kingdom, Australia and Canada defended Israel’s right to self-defense. Iran, Syria and Yemen voiced strong support for Hezbollah, while the Arab League issued statements condemning both sides.

Yet world opinion quickly changed, possibly due to international media coverage. Charges of “disproportionate response” and calls for the “immediate cessation of Israeli hostilities” were loud and frequent.

“Go back just a few months ago to Israel’s predicament. Day-after-day, Hezbollah fired rockets that had no purpose other than to slaughter Israeli citizens indiscriminately. Yet it was Israel that was cited for purported international law violations by the ineffable Kofi Annan, among other trans-national progressives, who claimed its retaliation was ‘disproportionate’ because of undue collateral damage. (A dubious surmise since Hezbollah terrorists, by dressing like civilians, moving among civilians, and using civilians as shields, make it hard to tell who is truly ‘collateral.’)”

Immediately following the cease-fire, Hezbollah kicked its public-relations campaign into high gear, handing out thousands of dollars in “aid” to the Lebanese, making sure the cameras of the world captured it all. However, Charlie Moore, senior producer at CNN, referred to Hezbollah’s post-war presentation to the world media as a “dog-and-pony show,” due to the perception of staging, misrepresentation, and strict control of all interviews.

Between a “Rock and a Hard Place”

With Israel’s military and security objectives regarding Hezbollah unaccomplished, rising public dissatisfaction with the government, and the majority of world opinion edging another notch or two to the anti-Israeli side, Israel remains caught between the proverbial “rock and a hard place.” In fact, if we consider the bigger picture, the situation is growing ever worse for the Jewish state.

Henry Kissinger—national security adviser for former U.S. President Richard Nixon, and secretary of state for presidents Richard Nixon and Gerald Ford—warned in a Washington Post opinion column that Hezbollah was still dangerous after its month-long conflict with Israel. “Hezbollah’s next move is likely to be an attempt to dominate the Beirut government by intimidation and, using the prestige gained in the war, manipulating democratic procedures,” he wrote.

The political normalization of terrorist/fascist/extremist groups, whether in Lebanon, the Palestinian territories, Iran or China, should raise red flags to most in the world. Recall Hitler’s so-called legitimate National Socialist German Workers’ Party in Germany during the 1930s.

Also consider the ongoing difficulties in Gaza and the West Bank—a people and a government being torn between two political powers—Hamas and Fatah. Violent clashes between the two are not uncommon. The majority of Palestinians support Hamas, but most of the world supports President Mahmoud Abbas, a relative moderate, and his Fatah party.

MCT
Lynchpin deal: Hamas political director Khaled Mashaal speaks to supporters in Damascus, Syria, on October 12, 2006. Mr. Mashaal is seen by many as the lynchpin to any deal that could end the political stalemate in the Israeli-Palestinian deadlock.

During a recent tour in the region, U.S. Secretary of State Condoleezza Rice said the United States was “very concerned” with the situation, and called on Islamic militants to cooperate with President Abbas. She added that the Hamas government cannot govern in the region.

Mr. Abbas has since threatened to dismiss the Hamas cabinet in an attempt to break the political deadlock and to release the hold on international aid. In a recent visit to the Gaza Strip, he refused to meet with Prime Minister Ismail Haniyeh, a senior political leader of Hamas, who told a rally that his party would never be pushed out of power, compromise on its principles or recognize Israel.

Political unrest in the Palestinian territories will eventually lead to social unrest, which at the very least will bring blame on Israel and likely the resumption of attacks.

Dr. Rice’s visit came on the heels of 135 former world leaders (including former U.S. President Jimmy Carter and former British Prime Minister John Major) calling for “fresh thinking and the injection of new political will” to resolve the conflict between Arabs and Israelis. “As long as the conflict lasts, it will generate instability and violence in the region and beyond,” the group said.

In earlier visits to Egypt and Saudi Arabia, Dr. Rice received both a polite hearing and a lecture from the United States’ two most powerful friends in the region—that, in effect, the Middle East conflicts are hinged to the Israeli-Palestinian conflict.

Israel must also contend with increasingly belligerent statements and actions from Iran, with its calls for Israel to be “wiped from the map” and describing the Holocaust as a myth. Iranian President Mahmoud Ahmadinejad spoke to thousands at an annual pro-Palestinian rally (i.e., Quds or Jerusalem Day, which calls for the handing of the city to Palestinians) and predicted Israel’s demise. He warned Israeli allies of the “boiling wrath” of the region’s people, describing his warning as an “ultimatum”: “You should not complain that we did not give a warning. We are saying this explicitly now. If a hurricane starts be rest assured that the dimensions of this hurricane will not be limited to the geographic borders of Palestine.”

Finally, Israel must maintain its relationship with its primary ally, the United States, which is experiencing its own struggles in Iraq, as well as with Iran, North Korea, China and Russia. With political change afoot in the U.S., whether in the 2006 midterm elections or the 2008 Presidential election, Israel should expect more difficult times ahead.

Regardless of how situations with Hezbollah, Hamas or Iran develop—regardless of political change in Israel or the U.S.—more difficult times are now just ahead for the entire world.