This website requires the use of Javascript to function correctly. Performance and usage will suffer if it remains disabled.
How to Enable Javascript
Europe and the Future of the Mid-East

Europe and the Future of the Mid-East

Once again, the world is confronted by the need for a “new Middle East.” Who is capable of making this happen? 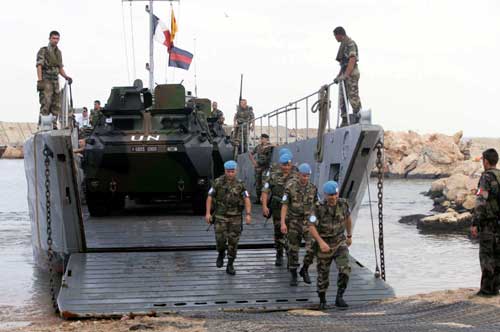 MCT
More than 150 French peacekeepers arrived by ship Friday, August 25, 2006, in the southern Lebanese port city of Nakoura. With France leading the force, the European Union has said it would supply half of the 15,000 anticipated troops.

For reasons including religion, race and natural resources, the Middle East has long been a cauldron of tension and conflict. The establishment of the State of Israel in 1948 brought a radical shift in the region’s power balance as well as attitudes among its neighbors.

Since that time, a multitude of proposals have been set forth intending to placate the factions in the region and bring lasting peace.

But hostilities continue to flare. The recent showdown between the nation of Israel and the Lebanon-based group Hezbollah, classified (in part or in full) as a terrorist organization by Israel, the United States, Canada and other nations, continued the cycle. This border skirmish has implications elsewhere in the Mid-East, including Syria, Iran and the Palestinian territories.

The region’s chronic unrest weighs heavily on governments around the globe. Recent diplomatic efforts known as the Middle East Peace Process began with the Madrid Conference, held in the fall of 1991 and sponsored by Spain, the United States and the USSR. These focused on cooperation among Israel and three of its neighbors—Lebanon, Syria and Jordan—and led to an Israeli-Jordanian peace treaty. But most goals set in Madrid are still eluding diplomats a decade and a half later.

In 2003, the Roadmap for Peace in the Middle East, which focused on building relations between Israel and the Palestinians, was presented by the U.S. in cooperation with the European Union, Russia and the United Nations, collectively called the Quartet.

With each new round of fighting, the rest of the world looks for a third party or parties to present a solution. This provides opportunities for other nations, or groups of nations, to demonstrate leadership on the world stage. In the process, it spotlights differing approaches, motivations and goals among those who would attempt to douse the geopolitical fires.

After the fighting broke out between Israel and Hezbollah, a number of countries and organizations were floated as candidates to intervene: the U.S., EU, North Atlantic Treaty Organization (NATO) and United Nations.

But America, Israel’s closest ally, is already overextended in Iraq and Afghanistan and, as a result, has limited its assistance during the recent conflict to intelligence and logistics. U.S. Secretary of State Condoleezza Rice, stating that the time has come for a “new Middle East,” proposed a two-stage plan to stabilize the region using international forces. The United States stood virtually alone in insisting that Hezbollah should be disarmed before any cease-fire took effect.

After a cease-fire was enacted August 14, many declared Hezbollah victorious, including the leaders of Iran and Syria. Syrian President Bashar Assad also stated that the outcome of the conflict proved the American plan for the Middle East is “an illusion” (AP).

When mulling a response to the crisis, a number of European nations were against the idea of a NATO peacekeeping mission, feeling the organization is too closely tied to Washington. On the other hand, European governments also balked at the proposal of an EU force from Javier Solana, the EU’s High Representative for the Common Foreign and Security Policy.

France was “considered the likely leader of the force because it has a strong army, can deploy troops quickly and has relative credibility in the Arab world, in part because of its opposition to the U.S.-British invasion of Iraq” (Reuters). France also has strong historical ties to Lebanon. However, citing a lack of clear rules of engagement for the peacekeeping force, France disappointed the world by committing only 200 troops to the UN force, far fewer than expected.

France later increased this number to 2,000 and was asked by UN Secretary-General Kofi Annan to lead the force until February of next year. As of this writing, it appears that the French will be joined by 4,900 troops from other European countries.

However, it is another nation of “old Europe”—Italy—that will have the strongest presence in the force, having pledged up to 3,000 soldiers. This nation’s leadership wants a clear European footprint in the Middle East in the wake of the crisis. The new prime minister Romano Prodi is making a point of stepping out of America’s shadow, stating, “I want to create some kind of European co-action” (International Herald Tribune).

A stated goal of this force is to work with the Lebanese army to implement a 2004 UN resolution calling for “all Lebanese and non-Lebanese militias” in the south to disarm. At that time, Hezbollah declared itself exempt from this resolution, claiming to be a “national resistance movement” rather than a militia, and the Lebanese army—along with some government officials—agreed. The recent UN resolution that resulted in the August 14 cease-fire leaves Hezbollah intact, leading some to state that it will only be a brief lull in the fighting.

In choosing a path of involvement (or non-involvement) in Lebanon, beyond any humanitarian motives, the nations of Europe must consider how their own interests will be affected. Factors include the prospect of Hezbollah becoming a strong political force in the rest of the Arab world—a neighboring region with extensive economic and political ties to Europe—the oil supply in the Persian Gulf and North Africa, on which Europe depends—and the reaction of the perhaps 20 million Muslims within current EU borders.

The latter concern was recently voiced by both French and German officials. Philippe Douste-Blazy, France’s foreign minister, fretted about the possibility of renewed Muslim riots in Paris suburbs being sparked by a French military presence in Lebanon. Meanwhile, Germany’s deputy leader of Parliament, Wolfgang Bosbach, stated, “I am really afraid of the radicalization of the Muslim communities in Germany. There are at least 900 supporters of Hezbollah and 300 of Hamas in our country. We are being very careful” (ibid.). A remarkable admission—1,200 residents can influence foreign policy decisions within a nation of 82 million people!

Another pressing concern has prevented decisive action from Germany: lingering collective guilt over the nation’s Nazi past. The fact that Germans were responsible for the deaths of six million Jews during World War II has made many Germans wary of involvement in a peacekeeping force. The possibility of German soldiers firing on Israelis creates a queasiness expressed by Chancellor Angela Merkel: “As Germans we should proceed in this region with utmost caution” (ibid.). In an irony of timing, a prominent author considered to be a voice of Germany’s conscience, Günter Grass, recently admitted to serving in the Waffen-SS in 1944 and 1945.

Eyes on the Horizon

The new UN peacekeeping mission is the first major European-led military deployment since the Bosnian war of the early 1990s. Europe’s actions there were largely viewed as ineffectual, and it took U.S. and NATO intervention to finally end the fighting.

Europe needs a resounding success to rebuild its credibility, and Lebanon could be its long-awaited door to greater Middle East influence. Mr. Prodi has alluded to this idea: “Let’s use common sense. Step by step. Now we have to guarantee peace between Lebanon and Israel. Then, of course, we have to start dialogue, links. But we will expand to the neighboring problems. Now we have to prepare minds and souls for that” (ibid.). And Europe, not as friendly with Israel as the United States, would bring a notably different long-term strategy to the region.

Europe is a highly developed, technologically advanced continent of over half a billion people, with a gross domestic product nearly equal to the United States (still the world’s largest economy). How long will this would-be superpower remain a divided, relatively passive player on the world stage?

Ultimately, the future will echo centuries past, and Europe will rise again to superpower status. But how can this be known in advance?

There is one book that records the rise of superpowers before it happens—the Bible. This book contains much information about Europe, and the dominant role it will assume in the future.