This website requires the use of Javascript to function correctly. Performance and usage will suffer if it remains disabled.
How to Enable Javascript
ISRAEL’S WALL – The Answer for True Peace?

The Answer for True Peace?

Building a wall, dividing a land—this might bring security, but will it deliver lasting peace? 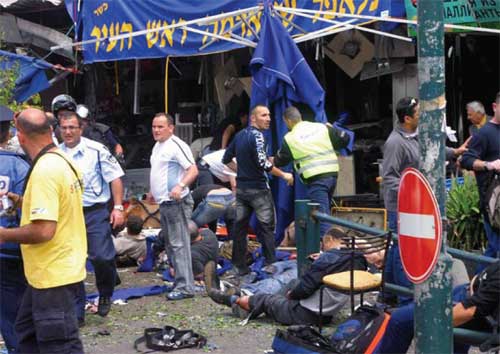 NOAM WIND/FLASH 90/KRT
Ongoing suicide attacks: A Palestinian suicide bomber blew himself up outside a fast-food restaurant in Tel Aviv during the Passover holiday, April 2006, killing nine other people and wounding dozens in the deadliest Palestinian attack in more than a year.

The winner was Kadima, a centrist party. However, it will have to form a coalition government since it did not win an overwhelming majority.

Nevertheless, the election results show that Kadima was given a mandate to unilaterally withdraw from the West Bank, with plans to establish Israel’s permanent borders by 2008. This gave credibility to the plan already in place: to surround the West Bank with a security fence, which is well on its way to completion.

The purpose of the fence, or wall, is to ensure Israel’s security from terrorism from the West Bank. It has already slowed the movement of suicide bombers; but will such a barrier force the Palestinians to pursue peace?

The Kadima Party’s victory was a compromise between two great schools of thought that have driven Israel over the past 30 years. The Israeli left (liberals) held a utopian vision of a negotiated peace deal with the Palestinians, hoping it would herald a new Middle East. This vision strove to do with the Jews and Palestinians what Holland, Belgium and Luxembourg did after World War II—a peaceful economic integration. In contrast, the right (conservatives) envisioned building an Israeli nation based upon the biblical boundaries of ancient Israel.

Neither idea has worked: The hopeful dream of peace was shattered by the second intifada; and the ongoing cost of occupying the territories has lowered Zionist zeal for a greater Israel covering all biblical lands.

Walls of the Past and Present

No matter the reasoning behind it, a security fence—a 6-meter-high concrete barrier dividing towns, cities and lands—immediately brings to mind similar walls of recent history.

For example, the Berlin Wall, which surrounded the Allied portion of West Berlin, Germany, was built to divide a common people split by the winning powers of World War II. Communist Eastern Germany built it to keep its populace from fleeing to the West. The wall came to symbolize the frontline of the Cold War between East and West, between communism and the free world.

Just as Berlin symbolized the frontline between the free world and communism, will Israel’s wall become a symbol of the division between the Christian-Jewish West and the Islamic East?

Effects of the Wall

The effects of the wall are already being seen. It has reduced vandalism and attacks on nearby kibbutz fields and buildings. In areas protected by the wall, attacks by suicide bombers have been reduced to nearly zero. This is leading some to believe that a clear division is the best way to begin anew.

But militants have already found ways to get around the wall. On the morning of the elections, Palestinian militants fired a longer-range Russian-made Katyusha rocket from Gaza into Israel. Katyushas can reach larger Israeli towns near Gaza and are far more deadly than the homemade Qassam rockets used in the past.

Before the security fence was erected, many cooperative business relationships were being built between the Israelis and Palestinians. Israeli businesses were initially attracted by the lower wages, but the fence has increased the “cost of doing business.” For some, it has become easier to do business with companies in Jordan than with businesses a few miles away on the other side of the barrier.

When the border was open, the Palestinians could freely enter Israel to find work. Now, it has become much harder to cross the border, and many have lost their jobs or have begun moving to other towns in search of work. Since they cannot rely on workers to cross the border each day, employers look for others to fill the jobs that need to be done. For instance, in the border town of Kalkilya (population 40,000), close to 15,000 residents commuted to Israel each day. But with the fence in place, 6,000 have moved away, and 640 shops have closed. This, according to some, has resulted in a kind of apartheid system in the Palestinian territories.

Imagine having to cross a wall each day to travel to school, as some Palestinian children must do. If they do not arrive at the gate during the time it is open, they risk missing school or not making it home at night. They are determined to go to school every day, fearing that Israel will shut the gate completely.

The building of the wall has yet to enter the areas around Jerusalem. Many wonder what will be the city’s fate. Kadima revealed days before the election that it would divide Jerusalem and allow a Palestinian state to be established in parts of Israel’s “eternal capital.” During an official debate, former Yesha Council chairman Otniel Schneller stated that Israel will keep sites important to the Jews under their control, and give other areas to the Palestinians for their capital.

Will the Jews accept having their “eternal capital” divided once again? Will the Palestinians accept being secluded to Arab neighborhoods in Jerusalem? The city—whose name means “City of Peace"—will be divided, and neither side will be happy.

The wall will divide and separate two peoples, only increasing the animosity between them. It will not bring peace, but only short term protection. The wall will only serve as a huge band-aid, treating the effect of a problem and not the cause. Over the course of history, this is how mankind has attempted to solve its problems.

True peace—which cannot be brought by barriers—will come to the entire world, but not in the way most think.