This website requires the use of Javascript to function correctly. Performance and usage will suffer if it remains disabled.
How to Enable Javascript
Tipping the Scales – The Changing U.S. Supreme Court

With two new justices within four months, could changes be ahead for America? 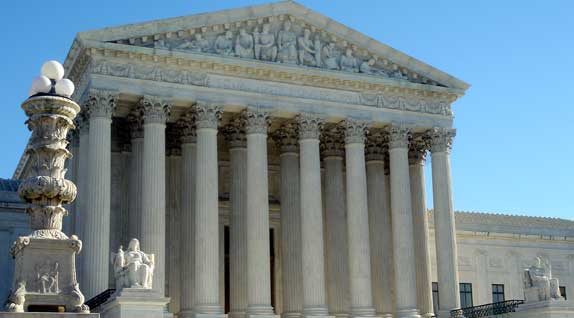 The U.S. Supreme Court nominations of Judge John G. Roberts in September 2005 and Judge Samuel A. Alito, Jr. in January 2006 were both expected to ignite a clash in Congress and among special interest groups and political action committees—and they did.

There was considerable liberal opposition to Judge Roberts. But since he is a conservative who replaced another conservative (the late Chief Justice William Rehnquist), his confirmation would not drastically affect the balance of the court.

However, Judge Alito replaced a swing vote in Sandra Day O’Connor. She was a moderate, whose opinions could line up with either side of the nine-member Court, making hers the pivotal vote in a number of five-to-four decisions. Those on the political left believed that President George W. Bush was obligated to appoint a replacement with a similar approach. Therefore, the prospect of Mr. Alito on the bench caused greater concern, as evidenced by the more sharply divided confirmation vote (58 for and 42 against, compared to 78-22 for Mr. Roberts; contrast these with the unanimous 99-0 confirmation of Mrs. O’Connor in 1981).

Massachusetts senators Edward Kennedy and John Kerry attempted to rally support for a filibuster to block a confirmation vote on Mr. Alito, calling it “the vote of a generation and a test of conscience” and referring to the nominee as a “far-right ideologue” (CNN). However, there was not sufficient backing in the Senate to move forward with the filibuster.

With the Democrats still stinging from their presidential election disappointments of 2000 and 2004, the appointments of judges Alito and Roberts are salt in the wound. These men appear to represent a long-term continuation of the legacy of President Bush, and the opposition is fighting to limit his ability to make fundamental changes to American law and policy. The Democrats are counting on regaining a majority of Congress in November, which would greatly increase the chances of a “lame-duck” presidency for the last two years of Mr. Bush’s tenure.

In the meantime, their strategy is to promote discontent with the Republican Party as a whole. This is often accomplished by portraying the mistakes or hardships of one individual—for example, the circumstances surrounding Vice President Dick Cheney’s hunting accident in February—as symptoms of deep flaws in the party.

So why does the Roberts Court, with Judge Alito now aboard, have liberals nervous?

The Most Pressing Issue

There is a matter that will be addressed by this court that carries huge implications for the American people: Abortion. The legal right to end the life of an unborn child is probably the most fervently protected interest of Western liberalism. To its defenders, this brutal practice represents the values of sexual freedom (in other words, license to avoid the consequences of irresponsible sexual behavior), gender equality and feminism.

During his confirmation hearings, Judge Alito referred to Roe v. Wade (the 1973 court decision that led to legalized abortion nationwide) as an “important precedent” and repeatedly stated that he would approach each court case with “an open mind.” This language unsettled those who opposed him. They viewed his remarks as broad and evasive, designed to avoid a firm position. During these hearings, Mr. Alito was also repeatedly questioned on his approach to stare decisis—the principle that previous legal precedents and rulings should be upheld. The main concern was obviously the Roe v. Wade precedent.

A push to outlaw abortion would be the flashpoint of an all-out war between conservatives and liberals—the straw that breaks the back of an already severely strained left-right dialogue.

In a 1985 memo, Judge Alito wrote that he preferred a more subtle approach to a “frontal assault” on Roe v. Wade. However, a frontal assault looks to be on its way in 2006. On February 22, South Dakota’s state senate voted for a ban on abortion in nearly all cases—even those of incest or rape. Under this proposed law, an abortion would be permissible only when a mother’s life is considered in danger. Ironically, the bill is mainly sponsored by a Democrat, State Senator Julie Bartling. Justice Alito is assigned to hear emergency petitions from the Eighth Circuit Court—the jurisdiction that includes South Dakota.

Some have expressed concern that with the additions of judges Roberts and Alito, for the first time in American history, the count of Roman Catholics on the court increases to five. They point out that Catholic justices have been quite consistent in their dissent from pro-abortion opinions.

If Roe v. Wade is overturned, this could lead to votes in each state on whether to permit abortion. This would lay the issue squarely on the table for voters across America. No longer would the taking of more then one million lives per year be blurred behind “the right to privacy.” (Take time to read our extensive report Abortion – Woman’s Choice or Modern Holocaust? to learn more.)

Another Nomination for President Bush?

A number of moderate and liberal Supreme Court justices are nearing retirement age, and some are battling health problems. With Stephen Breyer at age 67, Anthony Kennedy at 69, Ruth Bader Ginsburg nearing 73 and John Paul Stevens nearing 86, those who dread a further conservative tilt in the court are hoping that these justices will be able to continue through the end of President Bush’s second term.

Since, as mentioned, appointments to the Supreme Court are for life, the prospect of installing a third Bush-appointee conservative justice would be a nightmare for the opposition.

Will the Nominees Come as Advertised?

Twenty-four days after her nomination, Harriet Miers, the Supreme Court candidate who preceded Mr. Alito, withdrew from the process. Though she was opposed by liberals, it appears the pressure that ultimately led to her withdrawal came mainly from conservatives—some of whom feared she would not bring a strong enough presence to shift the court to the right, and that her stance on abortion was too soft.

Whenever a new justice takes the bench, he is followed by questions: Will he maintain a consistent approach? Or will his views change over time, as has been the case with some others—nearly always drifting to a liberal direction? Regarding court nominees, a slogan has developed among Republicans: “No more Souters.” This refers to Justice David Souter, who—appointed in 1990 by President George H. W. Bush—turned out to be much less conservative than his supporters had believed.

Some in the right wing felt that even Chief Justice Roberts’ conservative credentials were lacking. But many of these believe that his views are balanced by those of Judge Alito. Some commentators assert that Mr. Alito’s judicial approach lies to the right of Judge Antonin Scalia, long considered the most conservative justice.

When will the liberal-conservative struggle in the United States end? How long will the nation be divided into red and blue? Is either side’s viewpoint correct?

The Bible reveals that we are living in the last days. Time is running out for the “Great Experiment” of democracy, along with all other man-made governments across the globe. Even the most capable judges in all the world’s courts will not be able to keep the current world order limping along for much longer.

Speaking of the conditions in the modern nations of the West, Scripture records, “None calls for justice, nor any pleads for truth: they trust in vanity, and speak lies; they conceive mischief, and bring forth iniquity. Therefore is judgment far from us, neither does justice overtake us: we wait for light, but behold obscurity; for brightness, but we walk in darkness. We grope for the wall like the blind, and we grope as if we had no eyes: we stumble at noonday as in the night; we are in desolate places as dead men. We roar all like bears, and mourn sore like doves: we look for judgment, but there is none; for salvation, but it is far off from us” (Isa. 59:4, 9-11).

But soon, all nations will be ruled by the ultimate Judge—the returning Jesus Christ: “And I saw heaven opened, and behold a white horse; and He that sat upon him was called Faithful and True, and in righteousness He does judge…” (Rev. 19:11).

Christ’s judgment will not be based on a flawed charter or constitution—or on human opinions and interpretation. It will be according to righteousness—the keeping of God’s commandments (Psa. 119:172), also called the law of liberty (Jms. 2:12).

The book of Jeremiah describes the glorious future under Christ’s rule, “Behold, the days come, says the Lord, that…a King shall reign and prosper, and shall execute judgment and justice in the earth” (Jer. 23:5).

At that time, America—and all other nations—will truly enjoy “liberty and justice for all”!

(For more information, read our book Tomorrow’s Wonderful World – An Inside View!)