This website requires the use of Javascript to function correctly. Performance and usage will suffer if it remains disabled.
How to Enable Javascript
The Rise of the “Megachurch”

The Rise of the “Megachurch”

A new phenomenon is taking shape in America—one that is radically redefining the “Christian experience.” What is this trend, and why is it gaining popularity?

After a stirring live performance of “Jesus is Better Than Life,” a woman takes center stage before a roaring, enthusiastic crowd of 16,000 people. She declares, “We’re going to rock today. This place has been rocked a lot of times, but it’s never been rocked for Jesus” (The Christian Science Monitor).

Every weekend, similar scenes play out across the United States, as millions of people flock to the latest craze in religious experience—gigantic, multi-million-dollar worship complexes called “megachurches.” Resembling concert halls or shopping malls, these churches are stirring up frenzy among those seeking a more modern approach to religion.

Perhaps Alan Wolfe, a professor of political science at Boston College, describes the megachurch phenomenon best in his book The Transformation of American Religion: How We Actually Live Our Faith. In it, he writes, “American faith has met American culture—and American culture has triumphed.”

A megachurch is defined as a non-Catholic congregation with at least 2,000 attendees. Nearly all were established after 1955. On a typical weekend, the largest megachurch hosts roughly 30,000 people, with a 300-member choir and a 10-piece band. Many others boast similar numbers.

Mega church memberships generally explode within a two- to five-year period, becoming overnight successes. This can serve as a powerful attraction to one who is contemplating which local church to attend. As one member commented, “You hit a certain size and you can become self-generating. You attract people by your sheer size. People know that you are on TV and that this is that big place…There is a sense of something going on here…and size itself begats [sic] more growth” (Hartford Institute for Religion Research).

For those who are wary of a congregation being too big, one megachurch produces a pamphlet to ease such concerns, stating, “Big is Beautiful…Any church in a large, growing community that is practicing the ‘Great Commission’ cannot keep from growing. To criticize a church for being big is to imply disbelief in Christ’s commission…A church gets big because its spirit is big…Nobody ever started a business without hoping that someday, if he or she worked hard enough, it would be a big success. That is the American dream, isn’t it?” (ibid).

Massive attendance is not the only defining characteristic of a megachurch. These giant social complexes have other distinctive trademarks such as gymnasiums, schools, divorce centers, aerobics studios, computer centers, arcades, banquet halls, etc.—one even has a McDonald’s restaurant! Virtually all aspects of life are catered to at megachurches; they are not just Sunday experiences.

Giving People What They Want

In an ABC News report, a megachurch attendee commented, “You know, the culture is giving our kids a lot of fast-paced media and all different things that are moving along. Why can’t the church keep up and do the same thing for our kids and for us?”

In other words, why can’t churches tailor themselves to give people what they want—a church that is more “user friendly,” more up-to-date with the times?

This is precisely what megachurches do. Their goal is to promote an atmosphere that makes the statement, “This is not an ordinary church.” One megachurch pastor said, “We’re trying to create an environment here so the unchurched person can come in and say, ‘This is church like I have never known church.’”

This approach appears to be working. Notice a few statements from attendees:

“It’s not like, ‘…I have to go to church and be bored and have them spit scripture in my face,’ It’s like it’s fun and they make it great to learn.”

“In our family we almost kid, because we spend so much time up here [at the megachurch], just because we love it. There’s just a lot of fun things up here.”

“We love it. We don’t miss a Sunday. The message is always very positive and the music is great” (The Christian Science Monitor).

Before starting their organizations, some leaders of these giant congregations have taken polls in the community to see exactly what people desire in a church. For example, one entrepreneur went door-to-door throughout his community and asked two questions: “What’s your favorite radio station?” and “Why do you think people don’t go to church?”

The responses? First, they listened to rock music. Second, they did not attend church because they did not have fancy clothes, they did not like being asked for money, and the sermons did not relate to their lives.

In reaction to this poll, the leader sent out flyers stating, “You think church is boring and judgmental, and that all they want is your money? At [blank] you’ll hear a rockin’ band and a positive, relevant message. Come as you are. We won’t beg for your money. Your kids will love it!” (The New York Times).

Upon entering this particular church, you would see why it is so attractive to the average person. In the foyer, you are immediately greeted by five 50-inch plasma-screen televisions, a bookstore and a café with a Starbucks trained staff. Those who enjoy Krispy Kreme doughnuts will be happy to know that these are served at every service. For the children, there are numerous Xboxes available to hold their attention (ten for fifth- and sixth-graders alone).

“That’s what they’re into,” the church leader said. “You can either fight it or say they’re a tool for God.”

As for the dress code, it is “anything goes.” Depending upon the season, most wear jeans, sweats or shorts.

As the 55,000-square-foot church complex was being constructed, some asked if it was going to have stained glass windows or a steeple. The leader answered, “No! We want the church to look like a mall. We want you to come in here and say, ‘Dude, where’s the cinema?’”

All megachurch services share one thing in common: They are entertaining. Most use varying degrees of video, contemporary music and drama in their services. One megachurch stated that its goal is to have its services “feel like a concert”—to whip people into an emotional frenzy. Music is certainly an effective device for accomplishing this goal.

Bibles are generally optional, as biblical quotations are often flashed on gigantic video screens. Much of the service is comprised of Christian rock music with shallow, repetitive lyrics such as “Jesus, you are my best friend, and you will always be. Nothing will ever change that.” It is as though Christ is reduced to a high school crush!

At one megachurch, committing one’s life to Christ is simple: All he or she has to do is check a box on a card located on the back of every chair. Amazing!

Often resembling motivational speeches, the sermons are generally about how to live a successful life—or, “Jesus meets the power of positive thinking.” They are encouraging, upbeat and usually follow on the heels of a music and video presentation. (After this, the last thing those in attendance want to hear is a sermon about “doom and gloom.”) One will often hear phrases such as “Keep a good attitude,” “Don’t get negative or bitter,” “Be determined” and “Shake it off and step up.” Of course, the word “love” (as man—not God—defines it) is mentioned extensively.

Controversial subjects such as abortion and homosexuality are generally avoided, as megachurches attract a wide range of people with an equally wide range of beliefs. The idea is to be as inclusive and inoffensive as possible. After all, if these churches were to promote dogmatic stances on contentious subjects, they would lose members.

Preaching in a spirit of “love” is the name of the game.

One must ask, “Is the megachurch phenomenon the result of God leading them?” To find the answer, the Bible must be consulted. Regardless of what certain churches may say, the Bible is the inspired Word of God—all of it. As such, it contains definitive answers as to how you can determine whether a particular church is of God.

In Matthew 16:18, Jesus Christ declared, “I will build My church; and the gates of hell [the grave] shall not prevail against it.” Notice three important points in this scripture: (1) Christ said, “My church”—not “someone else’s.” (2) He said “church”—not “churches.” Christ does not—cannot—lead thousands of different, competing churches. (3) He said that His church will never be destroyed, meaning that somewhere on earth is the Church that Jesus is leading—and there is only one.

But understand. Just as Jesus Christ has built His Church, various men have built their churches—some big and some small. One cannot use membership size and speed of growth to determine if God is present at a particular church. As in the business world, men are fully capable of establishing, cultivating and leading large churches on their own. But this is not proof that God is behind such organizations.

The true Church of God can be identified by its teachings, which are vastly different from any other church. Unlike professing Christianity, God’s true Church teaches obedience to all of God’s laws, beginning with the Ten Commandments. It does not “sugar coat” or water down God’s Word to avoid offending people. It does not sidestep teaching sobering aspects of God’s Word (commonly criticized as “doomsaying”). After all, if God thought such topics were important enough to include in His Word, should His servants not preach them? And the Church that Christ is leading does not teach that a false version of love overrides God’s laws. Notice how the Bible defines love: “Love works no ill to his neighbor: therefore love is the fulfilling of the law” (Rom. 13:10). Obeying God’s laws results in true love—outgoing concern for others.

On the other hand, churches of men teach that all or some of God’s Commandments are done away, and that all one needs is man’s definition of love. In place of God’s Commandments, these churches teach “commandments of men.” Jesus pointed this out to the supposed religious authorities of His day, the Pharisees, who can be likened to today’s “spiritual leaders.” Notice: “But in vain they do worship Me, teaching for doctrines the commandments of men” (Matt. 15:9). Mark 7:9 adds further, “Full well you reject the commandment of God, that you may keep your own tradition.”

Yes, one can worship God to no avail—and countless millions are doing so! Incredibly, they do not seem to care. Most are only concerned with what they want—not what God wants.

The various megachurches are keeping abreast with modern American culture—and because of this, they will surely continue to attract large audiences. Nevertheless, they are not the result of God’s leadership. Read our booklet Where Is God’s Church? to learn more about how to discern where God is working. 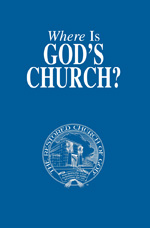