This website requires the use of Javascript to function correctly. Performance and usage will suffer if it remains disabled.
How to Enable Javascript
The Problem with Protesting

The Problem with Protesting

Demonstrators may mean well, but they often fail to see a fatal flaw in their tactics that keeps them from bringing lasting change. 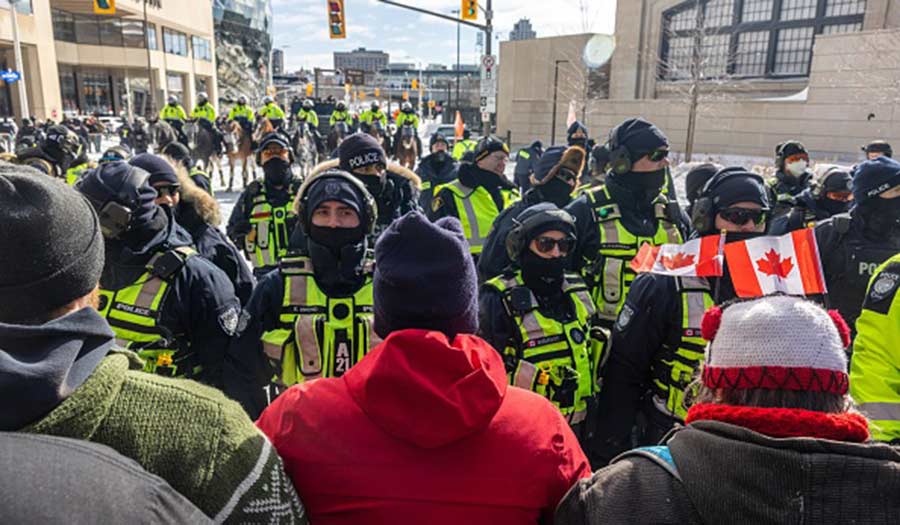 Beginning in January 2022, protesters driving semitrailer trucks and other vehicles jammed the streets of Ottawa, Canada’s capital, and obstructed border crossings. The so-called Freedom Convoy was opposed to the Canadian government’s COVID-19 restrictions, which were stricter than in the United States. The hostility was eventually directed to Prime Minister Justin Trudeau, who was seen as abusing his power.

For weeks, demonstrators blocked downtown streets and choked off some of the busiest border crossings into the U.S. Media outlets across the world took sides, some praising the protesters’ right to voice their opinions and others backing the government’s responsibility to restore order. After three weeks of chaos, authorities intervened.

In scenes rare for a country long known for its civility, hundreds of police, some in riot gear and some carrying automatic weapons, entered the protest zone. Scuffles broke out as police went nose-to-nose with the protesters amid cries of “freedom!” and the singing of the national anthem, “O Canada.” Horse-mounted officers pushed back crowds and protesters were removed in handcuffs. Trucks blockading the capital’s streets were towed.

As order was restored, activists were left to ask, “Was it all worth it? Did we achieve what we set out to accomplish?”

A similar sentiment carried across major uprisings of the past few years: the violent protest at the U.S. Capitol on January 6 led by those who believed the 2020 presidential election was rigged; race riots following the death of George Floyd; Yellow Vest gatherings against economic inequality in France. Were all these efforts for nothing?

From Hong Kong to Khartoum, Baghdad to Beirut, Afghanistan to South Korea, and Sri Lanka to the United Kingdom, people around the world gathered in masses in pursuit of freedom, sovereignty or simply a life less shackled by hardship. According to the Carnegie Endowment for International Peace, more than 110 countries have experienced significant protests since 2017. Over 25 of the more recent of these protests were directly related to the coronavirus pandemic.

The very nature of a protest suggests a fervent desire for change, the need to right an injustice, perceived or otherwise. Protests are a means to an end. But to what end? Depending on who or what the activists are demanding change from, the results can be varied.

Here is a look at some of the key protests of recent decades that occurred long enough ago to better reveal what they achieved or, more often, failed to achieve.

Martin Luther King Jr., who led the 250,000 strong March on Washington in 1963, and Malcolm X, who represented black empowerment, were colossal 20th century figures. These men represented two different means to a similar end: mass non-violent protest and achieving equality “by any means necessary.” The Civil Rights Act and Voting Rights Act were passed by the Johnson administration, which was sympathetic to tackling endemic racism in the nation. These were key inflection points. But social injustice and the Vietnam War ultimately dominated the decade, reaching a crescendo of civil unrest in 1968. Racial progress was slowed, and some believe halted altogether. Protests 50 years later such as demonstrations in Charlottesville, Virginia, and Kenosha, Wisconsin, were a result of continued racial strife. Many of today’s protests and demonstrations still revolve around race.

Revolution was in the air in Eastern Europe in 1989, powered by civil resistance meant to overthrow communist rule. One by one, countries fell in a reverse-domino effect—away from the Soviet Union and toward the West. The final Soviet leader, Mikhail Gorbachev, laid the groundwork for this tectonic shift. The Berlin Wall eventually fell and one-party rule was swept aside in East Germany, Poland and other states once cast as being behind the Iron Curtain. This all occurred mostly bloodlessly—the exception being in Romania where the tyranny of Nicolae Ceausescu and his family was ended by a firing squad on Christmas Day. The protests that led to the crumbling of the Berlin Wall were seen as a success.

Today, however, Europe remains under threat by unrest from Russia (formerly the Soviet Union) as the nuclear power violently seeks to annex Ukraine. This move reignited geopolitical tensions in a more fractured world and threatens to lead to even more bloodshed.

The Arab Spring to Today

Two decades after tensions subsided in the Cold War, the world witnessed another wave of protests consume an entire region. This one was the first to be captured on the digital platform of social media. After decades of dictatorship and kleptocracy, the Arab World wanted freedom. A Tunisian protester lit himself and eventually the world on fire and by 2011, autocratic rulers in Egypt, Yemen, Libya and Tunisia fell as a result. Tunisia, where it all began, transitioned to a democracy.

But what about today?

Egypt now lives under even more authoritarian rule, where all dissent is crushed and thousands languish in prison. Yemen and Libya have been torn to shreds by conflict and humanitarian catastrophe. Syria exploded quickly from an uprising against the Assad dynasty to ruinous civil war that left half a million dead and millions displaced. As of 2022, the conflict in Syria is stalemated with no official cease-fire and the progress initially seen in Tunisia was upended by inflation, declining living standards and political infighting.

These mixed results beg the question, do protests really work?

Yes, public demonstrations allow citizens to express their dissatisfaction and make their opinions known. But, as history shows, they rarely bring the lasting change they intended. The nature of protesting has also changed. To call crowds throwing bottles and stones, yelling, cursing, spray painting vile messages, breaking windows and burning buildings and vehicles “peaceful protesters” is disingenuous at best. A “peaceful” protest now may simply mean that actual bullets did not fly. In many cases these demonstrations are riots, plain and simple.

Acts of violence and aggression may get the attention of the opposing side and those in the middle, but not necessarily to a good end. Incivility often overshadows what could otherwise be a worthwhile message.

While God wants human equality and governmental fairness, He has never condoned protesting and rioting to get there. He says in Exodus 23:2: “You shall not follow a multitude to do evil; neither shall you speak in a cause to decline after many to wrest judgment.” When angry crowds get together, usually bad things result. The phrase “angry mob” is well known for a reason. Crowds of people coming together can draw out the worst in people. The herd or mob mentality leads people to do things they would never do if they were by themselves.

Protests are the result of fighting for a cause. However, most importantly, they remind us of the raw human nature we are all capable of. While protesting can seem to be the solution, it never brings the lasting change participants may have genuinely intended. And worse, they can lead to life- and world-changing negative effects.

No cause, righteous or otherwise, seems to allow us to shake this reality.

For more on the nature of man, read Did God Create Human Nature? It explains the reason people act the way they do in protests.