This website requires the use of Javascript to function correctly. Performance and usage will suffer if it remains disabled.
How to Enable Javascript
Jails Emptied in the Pandemic. Should They Stay That Way?

Jails Emptied in the Pandemic. Should They Stay That Way? 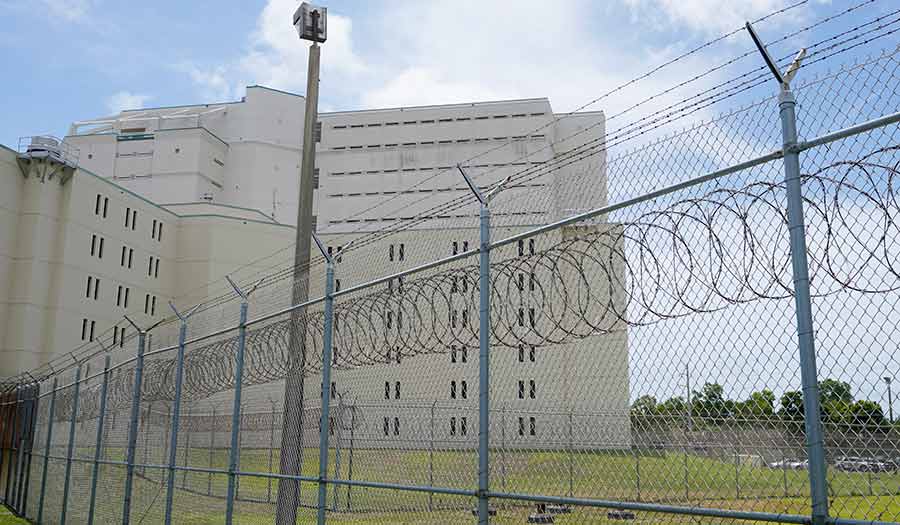 AP/Wilfredo Lee
The Palm Beach County Main Detention Center in West Palm Beach, Florida (June 4, 2021). By the middle of 2020, the number of people in jails nationwide was at its lowest point in more than two decades.

It was not long after Matthew Reed shoplifted a $63 set of sheets from a Target in upstate New York that the coronavirus pandemic brought the world to a standstill.

Instead of serving a jail sentence, he stayed at home, his case deferred more than a year, as courts closed and jails nationwide dramatically reduced their populations to stop the spread of COVID-19.

But the numbers have begun creeping up again as courts are back in session and the world begins returning to a modified version of normal. It is worrying criminal justice reformers who argue that the past year proved there is no need to keep so many people locked up in the U.S.

By the middle of last year, the number of people in jails nationwide was at its lowest point in more than two decades, according to a new report published Monday by the Vera Institute of Justice, whose researchers collected population numbers from about half of the nation’s 3,300 jails to make national estimates.

According to the report, shared with The Marshall Project and The Associated Press, the number of people incarcerated in county jails across the country declined by roughly one-quarter, or 185,000, as counties aggressively worked to release people held on low-level charges, dramatically reduced arrest rates and suspended court operations.

But in most places, the decrease did not last long: From mid-2020 to March 2021, the number of people in jails awaiting trial or serving short sentences for minor offenses climbed back up again by more than 70,000, reaching nearly 650,000.

“Reducing the incarcerated population across the country is possible,” said Jacob Kang-Brown, a senior research associate at the Vera Institute of Justice and author of the new report. “We saw decreases in big cities, small cities, rural counties and the suburbs, but the increase we see is troubling.”

In the Genesee County Jail in New York, where Mr. Reed recently began a six-month sentence for petit larceny, there were, for a time, only 35 people jailed, down from 90 before the pandemic, according to data compiled by the Vera Institute. Defendants had court dates pushed off, and judges went to extra lengths to allow people to wait at home rather than in jail. (New York’s bail reform law also went into effect in early 2020 and reduced jail populations even further.) By March, there were 54 people jailed in the county lockup.

For Mr. Reed, who said he has struggled with an addiction to crack cocaine, going to jail has meant losing his disability checks, his only source of income. Without income, he has no way to pay rent, and he fears that unless a family member can take him in, he will be homeless when he is released in September.

No sooner had social distancing become the new normal than it became clear that such a thing was impossible in jails. Overcrowding, poor sanitation and subpar medical care amplified the threat. And unlike in prison, where people serve sentences of one year or more, the jail population is in constant churn as people are arrested, released on bond or take plea deals and leave.

More than 40 people have died of COVID-19 in jails since the start of the pandemic, according to a Bureau of Justice Statistics survey of nearly 1,000 jails. That is likely an undercount; the virus has killed more than 2,600 prisoners and 207 staff in U.S. prisons, where deaths are easier to track.

But many officials across the country, from small towns to suburbs and big cities, worked to get people out of jail. Public defenders and prosecutors—typically on opposing sides—collaborated with judges, sheriffs and local police departments to identify those in jail who could safely be released, and to make plans to send fewer people to jail, according to interviews with officials in more than a dozen counties.

“In the first few months, really almost all we did was releases,” said Florida Circuit Criminal Court Judge Nushin Sayfie in Miami-Dade County.

Bryan County, Georgia, reduced its jail population from 37 to 11, according to the Vera Institute. Sheriff Mark Crowe told police in the surrounding towns that he would only jail people charged with serious crimes like domestic violence. It was a challenge to persuade local law enforcement “to back off on some of the minor offenses you’d normally send to jail,” said jail administrator Larry Jacobs. “With traffic offenses, we told them, ‘Write them a ticket, give them a court date and wave goodbye.’”

In Wilbarger County, Texas, the sheriff made a similar decision. Paired with the local district attorney’s aggressive efforts to free anyone who was not a safety risk, the move cut that jail’s population in half, to fewer than 20. Throughout the early days of the pandemic, the local district attorney’s office reviewed the felony arrests each day and made sure anyone accused of a nonviolent crime—and even some with violent crimes, on a case-by-case basis—was released to await trial at home rather than in the jail, said Staley Heatly, the district attorney there. “I’ve been DA here for almost 15 years. That is about the lowest jail population number we have ever had,” Mr. Heatly said.

For Patrick Fagan, it seemed at first like getting probation for his marijuana possession charge in Flowood, Mississippi, was a good deal. But as a server in a restaurant with late-night hours, he sometimes missed check-ins with his probation officer, which resulted in his probation getting extended. He landed in jail after being stopped for speeding, when the police looked up his license and discovered unpaid court fees. Finally, after he and his partner weighed the risks of COVID-19 with the toll probation was taking on their lives, they decided he should take a deal that would have him serve a weekend in jail in order to end his probation.

But when he got to the Lowndes County Jail to serve his time last August, he said, they turned him away. As a precaution against the virus, they were only accepting people charged with violent crimes. “I don’t know how to quantify how good it feels to not have to go to jail,” Mr. Fagan said.

The realities of the pandemic also kept jail populations down. Police officers tried to keep their distance from people on the street. Stores, bars and restaurants were closed, reducing calls for shoplifting, fights and related crimes. Roadways were quiet, which led to fewer traffic stops and the arrests that stem from them, like when police find drugs in a car or discover an outstanding warrant on the driver. Probation and parole departments across the country conducted far fewer check-ins, and most were by phone, which provided fewer opportunities to discover violations.

As courthouses closed, many defense attorneys, with none of the hearings and motions that usually fill their calendars, focused exclusively on getting clients out of jail. In Palm Beach County, Florida, the public defenders’ office set up a team “to keep reviewing and reviewing people in custody and coming up with creative arguments,” said Dan Eisinger, the county’s chief assistant public defender. If the judge denied bond the first time, the team went out to look for more information—additional evidence of preexisting conditions, new medical records or information from family—and tried again, three and even four times, Mr. Eisinger said.

And it worked. By June of last year, the Palm Beach County Jail had gone from about 1,750 people before the pandemic to 1,500, according to the data compiled by the Vera Institute.

“There was a real fear that people were going to get sick and die. Most judges did really factor that in,” Mr. Eisinger said.

Reform advocates used the pandemic to support their argument: Cramped and filthy jails are the wrong place for most people who have been arrested. The pandemic forced a rapid departure from the status quo and became something of an exercise in an alternative to incarceration. “The pandemic has given prosecutors the chance to implement practices that have been discussed and floated for years now,” said Alissa Heydari, a former Manhattan prosecutor who is deputy director of the Institute for Innovation in Prosecution at John Jay College of Criminal Justice.

The moment comes as the nation is already reassessing the criminal justice system, decriminalizing some lower-level crimes and reforming bail laws. The killing of George Floyd in May 2020 accelerated the discussion around policing and the need for reform. Reformers are asking: Nothing catastrophic happened while people were not jailed, so why bother now? Why can’t the system work to keep defendants out, instead of in?

However, momentum for long-lasting change is wavering in the face of a rise in crime—including shootings and other violence—after several years at or near historic lows. Police leaders and union officials in places like New York City and Philadelphia have blamed policies freeing people from jail.

While some violent crimes have been increasing, the number of people accused of shootings and homicides makes up a sliver of the jail population. The most common crimes, such as theft and drug crimes, decreased during the pandemic.

But for some officials, the push to clear the jails was simply a temporary precaution.

“The wrong conclusion to draw is, somehow before the pandemic we were putting people in jail that didn’t need to be there, and we stopped the optional people,” said Jeff Langley, district attorney in Lumpkin County, Georgia.

In Philadelphia, District Attorney Larry Krasner said the precautions brought on by the pandemic cannot solve the problems of the criminal justice system.

“I don’t think that there’s any way to take a completely anomalous moment—the most anomalous moment in criminal justice of the century—and say that this is the new model,” said Mr. Krasner, a Democrat. “But…if the question is whether the most incarcerated country in the world should be less incarcerated, the answer is…yes.”

A problem with such efforts, however, is that only 15 percent of prisoners in state jails were charged on drug crimes. “Were we to free every person in prison on a drug charge tomorrow, we’d still have 1.2 million people in prison and something close to, if not actually, the highest incarceration rate in the world,” John Pfaff, a professor at the Fordham University School of Law in New York, said in a Federalist Society interview.

The majority of incarcerations are on charges of violence, including drug-related murder. Underscoring the complications of reducing drug-related crimes to reduce jail populations, Mr. Pfaff said that “some, and perhaps many (though surely not all), of the homicides that arise from prohibition may occur in a world with legalization too, just for different reasons. Drug-related violence tends to occur in neighborhoods that are already under immense economic, and thus social and emotional, strain, which are all causes of violence; ending criminal prohibition may help, but if the underlying stress remains, so too will much of the violence.”

Criminal Minds – Would God Use Prisons to Rehabilitate?

The Founding Fathers framed much of the United States on Judeo-Christian values, so it should be no surprise that prisons have roots in religion. But is modern imprisonment biblical?