This website requires the use of Javascript to function correctly. Performance and usage will suffer if it remains disabled.
How to Enable Javascript
Why Is Space Exploration the ‘Stuff of Our Dreams’?

Why Is Space Exploration the ‘Stuff of Our Dreams’? 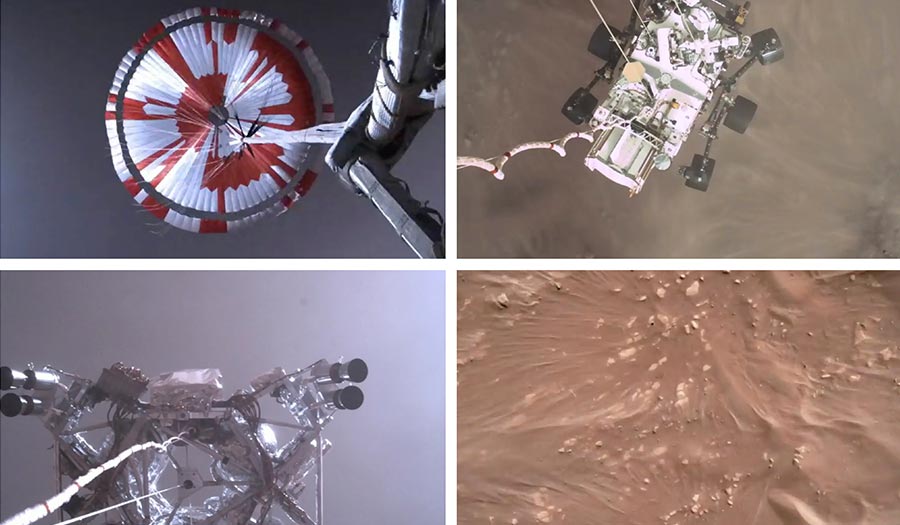 This combination of images from video made available by NASA shows steps in the descent of the Mars Perseverance rover as it approaches the surface of the planet (Feb. 18, 2021).

NASA on Monday released the first high-quality video of a spacecraft landing on Mars, a three-minute trailer showing the enormous orange and white parachute hurtling open and the red dust kicking up as rocket engines lowered the rover to the surface.

The footage was so good—and the images so breathtaking—that members of the rover team said they felt like they were riding along.

“It gives me goose bumps every time I see it, just amazing,” said Dave Gruel, head of the entry and descent camera team.

The Perseverance rover landed last Thursday near an ancient river delta in Jezero Crater to search for signs of ancient microscopic life. After spending the weekend binge-watching the descent and landing video, the team at Jet Propulsion Laboratory in Pasadena, California, shared the video at a news conference.

“These videos and these images are the stuff of our dreams,” said Al Chen, who was in charge of the landing team.

Six off-the-shelf color cameras were devoted to entry, descent and landing, looking up and down from different perspectives. All but one camera worked. The lone microphone turned on for landing failed, but NASA got some snippets of sound after touchdown: the whirring of the rover’s systems and wind gusts.

Flight controllers were thrilled with the thousands of images beamed back—and also with the remarkably good condition of NASA’s biggest and most capable rover yet. It will spend the next two years exploring the dry river delta and drilling into rocks that may hold evidence of life 3 billion to 4 billion years ago. The core samples will be set aside for return to Earth in a decade.

NASA added 25 cameras to the $3 billion mission—the most ever sent to Mars. The space agency’s previous rover, 2012’s Curiosity, managed only jerky, grainy stop-motion images, mostly of terrain. Curiosity is still working. So is NASA’s InSight lander, although it is hampered by dusty solar panels.

They may have company in late spring, when China attempts to land its own rover, which went into orbit around Mars two weeks ago.

Some of the spacecraft systems—like the sky crane used to lower the rover onto the Martian surface—could not be tested on Earth.

“So this is the first time we’ve had a chance as engineers to actually see what we designed,” Deputy project manager Matt Wallace told reporters.

Thomas Zurbuchen, NASA’s science mission chief, said the video and also the panoramic views following touchdown “are the closest you can get to landing on Mars without putting on a pressure suit.”

The images will help NASA prepare for astronaut flights to Mars in the decades ahead, according to the engineers.

“I know it’s been a tough year for everybody,” said imaging scientist Justin Maki, “and we’re hoping that maybe these images will help brighten people’s days.”

Beyond the new videos and images from Mars, space exploration itself is the “stuff of our dreams.” What is continually driving us to explore our solar system and beyond?

For one, it pushes us to progress in ways we now mostly take for granted.

In 60 years we went from being bound to the Earth to visiting every planet in the solar system. With satellite coverage, we are never alone on the planet—we can talk on cellular phones and drive with GPS. Technologies for industry, transportation and medicine, as well as our understanding of human health, have advanced because of space travel. Also, the photographic and video images of places never seen before have aroused imaginations and inspired generations to continue the quest of understanding humanity’s place in the universe.

But, ultimately, space exploration missions answer fundamental but profound questions mankind has asked for millennia. NASA listed a number of questions: “What is the nature of the Universe? Is the destiny of humankind bound to Earth? Are we and our planet unique? Is there life elsewhere in the Universe?”

These same questions have motivated humans to devote their lives to searching the great unknowns: Cortez and Columbus claiming land in the “New World,” crews racing to be the first to reach the South Pole in Antarctica, Theodore Roosevelt charting the River of Doubt in the Amazon, and the ongoing effort to reach greater depths in the ocean’s trenches.

Human beings have an insatiable need to find anything and everything that is beyond their line of sight. David Scott, an astronaut who set foot on the moon during the first rover mission in Apollo 15, summarized this: “As I stand out here in the wonders of the unknown at Hadley, I sort of realize there’s a fundamental truth to our nature. Man must explore. And this is exploration at its greatest.”

Eyes to the Sky

There is one source that can explain our passion to understand the unknown: the Being who created everything.

Notice: “Thus says God the Lord, He that created the heavens, and stretched them out…” (Isa. 42:5). “I have made the earth, and created man upon it: I, even My hands, have stretched out the heavens, and all their host have I commanded” (45:12). “It is He that sits upon the circle of the earth, and the inhabitants thereof are as grasshoppers; that stretches out the heavens as a curtain, and spreads them out as a tent to dwell in” (40:22).

The heavens glisten with fingerprints of a Creator. It is no wonder Buzz Aldrin quoted on the last night of his mission before splashdown: “When I consider Your heavens, the work of Your fingers, the moon and the stars, which You have ordained: What is man, that You are mindful of him?” (Psa. 8:3-4).

Mr. Aldrin was quoting a man who lived 3,000 years ago—David, who slayed Goliath and was king of ancient Israel.

Both Aldrin and King David, as well as anyone who has seen the vastness of the universe, realized how tiny and insignificant they were.

The same Being who created the stars also made human beings, and designed us to feel this way. Notice: “He has set the world [eternity] in their heart, so that no man can find out the work that God makes from the beginning to the end” (Ecc. 3:11).

God is eternal—He is infinite! But because human beings are finite, “a man cannot find out the work that is done under the sun: because though a man labor to seek it out, yet he shall not find it; yea further; though a wise man think to know it, yet shall he not be able to find it” (8:17).

The desire to understand all of God’s Creation and our place in it was put in our hearts, so we yearn and search. Space exploration programs are a modern fulfillment of this. But God promised that we would not be able to figure out eternity. Therefore, we continue to wonder and explore.

This can sound defeating—until you realize the real, mind-boggling purpose for every human being who has ever lived.

Again, the answer is contained within God’s Word. Read what comes after the verses Mr. Aldrin quoted from Psalms: “You made [man] to have dominion over the works of Your hands; You have put all things under his feet” (8:6).

What is being explained has enormous implications: Man was made to have control over everything God made—which is everything!

Your incredible potential exceeds what even thousands of scientists could accomplish by getting man to Earth’s nearest neighbor—as far as the galaxies and the edges of the Universe are from Earth.

Read The Awesome Potential of Man to grasp the crucial purpose for your life.

This article contains information from the Associated Press.