This website requires the use of Javascript to function correctly. Performance and usage will suffer if it remains disabled.
How to Enable Javascript
The Blast that Blew Away Lebanon’s Faith in Itself

The Blast that Blew Away Lebanon’s Faith in Itself 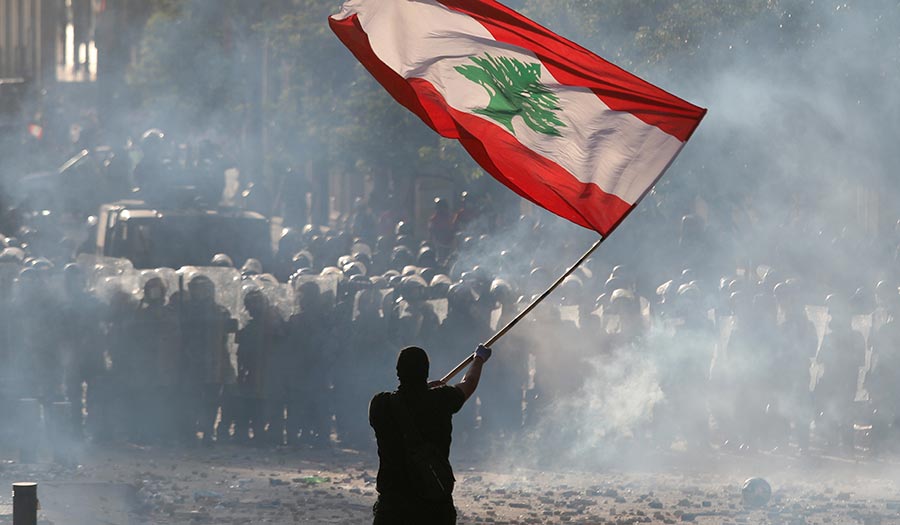 Reuters/Goran Tomasevic
A demonstrator waves the Lebanese flag in front of riot police during a protest in Beirut days after the explosion at the capital’s port (Aug. 8, 2020).

BEIRUT (Reuters) – They gather in groups, wearing black, in the shadow of buildings gutted by the explosion that shook this city on August 4. Men, women and children from Christian and Muslim sects cradle portraits of their dead.

Beirut has been blown back to the vigils of its 1975-1990 civil war. Then, families demanded information about relatives who had disappeared. Many never found out what happened, even as the country was rebuilt. Today’s mourners know what happened; they just do not know why.

Four months on, authorities have not held anyone responsible for the blast that killed 200 people, injured 6,000 and left 300,000 homeless. Many questions remain unanswered. Chief among them: Why was highly flammable material knowingly left at the port, in the heart of the city, for nearly seven years?

The blast has left many Lebanese questioning what has become of a country that seems to have abandoned its people. This time, the lack of answers over the catastrophe is making it difficult for an already crippled nation to rise from the ashes again.

“I feel ashamed to be Lebanese,” said Shoushan Bezdjian, whose daughter Jessica—a 21-year-old nurse—died while on duty when the explosion ripped through her hospital.

It took 15 years of sectarian bloodletting to destroy Beirut during the civil war. It then took 15 years to rebuild it—with lots of help from abroad. In 1990, billions of dollars poured in from Western and Gulf Arab countries and from a far-flung Lebanese diaspora estimated to be at least three times the size of the country’s 6 million population.

The result was impressive: Beirut was reincarnated as a glamorous city featured in travel magazines as an exciting destination for culture and partying. Tourists came for the city’s nightlife, to international festivals in Graeco-Roman and Ottoman settings, to museums and archaeological sites from Phoenician times.

Many highly educated expatriates—academics, doctors, engineers and artists—returned to take part in the rebirth of their nation. Among them was Youssef Comair, a neurosurgeon who had left Lebanon in 1982 to pursue a specialization in the United States.

Mr. Comair had then worked as assistant professor of neurosurgery at UCLA and head of the epilepsy department at the Cleveland Clinic, where he pioneered the use of surgery as a therapy for epilepsy. When he landed back in Beirut to work as head of surgery at the American University of Beirut, Mr. Comair believed the country had turned a corner. Prime Minister Rafiq al-Hariri, the industrialist-turned-politician who had rebuilt post-war Beirut, was in power and promised a renewed age of prosperity.

“I was yearning for a life and a place…receptive to all kinds of civilizations. This is what we were in Lebanon before the war,” recalled Mr. Comair.

Behind the splendor of Beirut, however, post-civil war Lebanon was being built on shaky political ground.

At the end of the war, militia leaders on all sides took off their fatigues, donned suits, shook hands after the 1989 Saudi-brokered Taif peace accord and largely disarmed. But the nation’s political leaders, it seemed to many here, continued to pay more attention to a revolving door of foreign patrons than to the creation of a stable state.

The country’s Shiite Muslims turned to Iran and its Arab ally Syria, whose troops entered Lebanon in 1976 and stayed for three decades. The Sunnis looked to wealthy oil producers in the Gulf. Christians, whose political influence was heavily curtailed in the post-war deal, struggled to find a reliable partner and shifted alliances over the years. Domestic policy was dictated, at different times, by the foreign power with the deepest wallet.

After the Iranian-backed Hezbollah drove out Israeli forces in south Lebanon in 2000, the group was steadily increasing its military and political influence. In 2005, Hariri was assassinated, once more dealing a blow to those who thought Lebanon had a bright future. Once again, Lebanese top professionals emigrated. Mr. Comair took up a position at St. Luke’s Episcopal Hospital in Houston in 2006.

During the Arab Spring in 2010, while protests erupted and dictators were toppled in Tunisia, Egypt, Syria, Libya, Bahrain and Yemen, Lebanon seemed like an oasis in a troubled region. Beirut was once again bustling. By 2012, Mr. Comair was back in Beirut.

Lebanese were lulled back into a sense of security: traditional Sunday lunches with family; sunset drinks on the decks of Beirut beaches; music and film festivals; wine tasting in the vineyards of Mount Lebanon’s foothills, skiing on its slopes. Friends and family began visiting in greater numbers, as Lebanon’s wartime reputation began to be forgotten. Tourism peaked in Lebanon in 2010, when the number of visitors reached almost 2.2 million, a 17 percent increase from 2009, according to official statistics.

Yet again, however, Lebanon’s foundations were weak. The country was living beyond its means, with successive governments piling up debt, which rose to the equivalent of 170 percent of national output in March 2020, according to Lebanon’s finance ministry. This time, national banks bore the brunt of the nation’s spending. By early last year, their losses on loans to the state totaled $83 billion, considerably more than Lebanon’s annual gross domestic product. The banks reacted by shutting their doors, freezing all accounts—effectively shutting down Lebanon’s economy.

For more than a year now, people in Lebanon have not been able to transfer money or withdraw more than $500 a week. The closure of the banks blocked another key stream of income for Lebanon’s economy—money from the diaspora.

Even before the coronavirus pandemic, Lebanon’s economic output had shrunk by 6.7 percent in 2019. In 2020, the economy is projected to shrink by another 20 percent. More than 50,000 children have left private schooling and enrolled in state education over the past year, government figures show, a trend that underscores the erosion of the country’s middle class. Nearly 700 doctors have left Lebanon over the past year, according to Sharaf Abou Sharaf, head of the doctors’ union.

What many Beirutis did not know before August is that an even bigger threat lay in their midst.

In 2013, a ship had docked at the Beirut port with a stash of the highly flammable chemical ammonium nitrate. It was not—and is not to this day—clear why the ship had headed to Lebanon. But the arrival and storage of the material was known to a revolving door of port and national security officials—installed by various government factions—who were never able to agree on how to remove the chemical shipment. It lay untouched for more than six years in a warehouse at the Beirut port, a short walk from the busy city center.

When covering the civil war, the author of this report chronicled the deaths of dozens of victims overlooked amid the bigger events: two sisters who drowned at sea in a desperate attempt to flee shelling; three brothers immolated in a supermarket; young school children hit in shelling that targeted their bus. One morning in 1989 he found himself walking into a morgue with a mask that could not stifle the suffocating stench of 20 army soldiers shot in the head, their hands still tied behind their backs.

But nothing compares to the terror in the eyes of his twin children on that afternoon in August when his car was suddenly thrown toward the side of the road as an orange and white mushroom cloud of dust and debris rose over our heads. “Duck and cover,” he yelled, instantly thrown back to the bombs of his conflict-zone reporting days. Glass and bricks from collapsing buildings fell near the car; uprooted trees blocked the roads. People ran everywhere; wailing ambulances struggled to reach the wounded.

“Life stopped on August 4,” said Rita Hitti, whose son Najib was a firefighter who was killed along with two other family members as they battled the flames that ignited the explosives at the port.

“I no longer have any feeling towards anything—my country or anything else.”

After the blast, the government resigned in the face of popular anger. But Lebanon’s different ruling factions remain too divided to create a new government that can help rebuild the city—and Lebanon’s economy. Their loyalties are split between the United States, Europe and the Gulf states on one side and Iran and Syria on the other. Attempts by France’s President Emmanuel Macron to help cobble together a new administration have thus far failed.

Today, the split between Lebanon’s elite and the wider population is wide. Lebanese tycoons regularly feature on the Forbes list of the world’s richest people. Among the six listed in 2020 were members of the family of al-Hariri, the assassinated prime minister, and another former premier, Najib Mikati, and his brother Taha. Other leaders, many of them former militia heads, now live in grand villas, surrounded by security, in Beirut’s wealthy suburbs or secluded hilltops.

In 2019, the richest 10 percent owned about 70 percent of the country’s personal wealth, according to a report by the United Nations Economic and Social Commission for Western Asia. More than half the population is in poverty, the report added.

Samia Doughan, 48, recently joined a protest at the Beirut port against the nation’s leaders. She sobbed as she held a picture of her dead husband. “Every day, we wake up crying and we sleep crying,” said Ms. Doughan, the mother of twin girls. “These leaders should have been toppled a long time ago. They ruled us for 30 years, it’s enough.”

In contrast to the post-civil-war period, when overseas support flowed in, foreign donors say they will not finance Lebanon until a new administration can show that their money will not be squandered.

During the civil war, many Lebanese emigrated. This time, too, people are starting to look for an exit. Information International, a Beirut-based research firm which has done extensive research about migration, said an estimated 33,000 people left in 2018 and 66,000 left in 2019.

Immediately after the August blast, searches in Lebanon for the word “immigration” on Google Trends hit a 10-year peak, and a recent search by the Arab Opinion Index revealed that four out of five Lebanese aged 18 to 24 are considering emigration.

The heart of the capital, ordinarily packed over Christmas, is deserted. Stores and restaurants are closed. Martyrs Square, which during the Civil War was the frontline between Muslim west and Christian east Beirut before being rebuilt, is no longer lit up at night.

Mr. Comair is now thinking of leaving Lebanon again. He spends his days trying to rebuild his hospital, which was destroyed during the explosion. But he has little faith in the country’s long-term revival.

“We are witnessing the annihilation of Lebanon,” he told Reuters. “I have no hope that this country can rise up.”