This website requires the use of Javascript to function correctly. Performance and usage will suffer if it remains disabled.
How to Enable Javascript
The End to All Conflict

The End to All Conflict 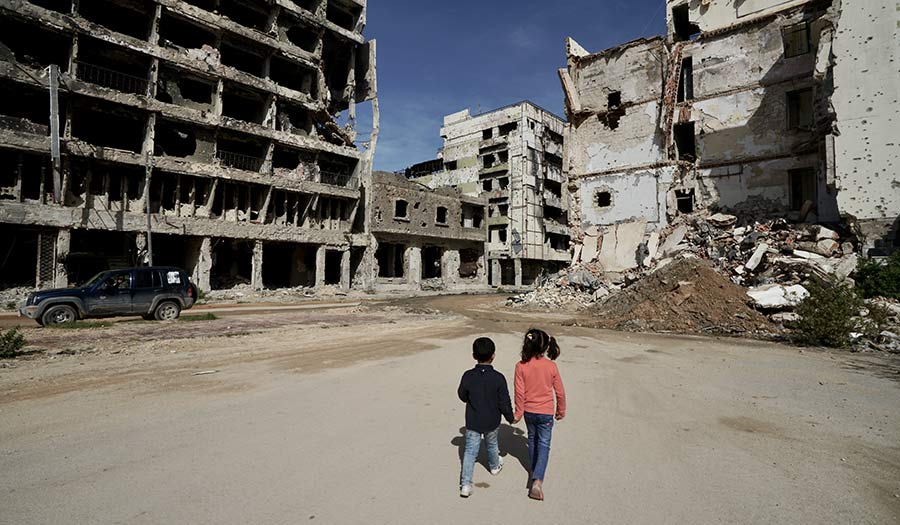 Giles Clarke/UNOCHA via Getty Images
Children walk among damaged buildings in Benghazi’s Old Town in Libya (Jan. 31, 2019). The city lies in ruins after the Libyan revolution in 2011 and occupation by ISIS militants from 2014 to 2017.

More than ever before, this world desperately needs sweeping change—and SOON! On the heels of one of the worst pestilences to ever strike mankind, a firestorm of protests has engulfed the globe over the tragic death of a black man at the hands of a police officer in Minnesota. This issue of The Real Truth examines these two major crises threatening to totally destabilize an already unstable world.

Masses are seeking solutions to longstanding issues of conflict, injustice and hatred that has plagued mankind throughout history. But despite constant effort, resolution and peace remains more elusive than ever. With the passing of time come more problems, not less. Why? Why, at every turn, has mankind bungled and botched all efforts to solve its truly great problems?

This is because men cannot, and never will, find the way to peace on their own without outside help. In reality, they have no chance to achieve world peace. Here is why.

As part of an extensive Bible prophecy about world conditions in our time, the prophet Isaiah answers this question: “The way of peace they know not; and there is no judgment in their goings: they have made them crooked paths: whosoever goes there shall not know peace” (59:8). The solutions of men always lead to more wars, ruin, misery, death and destruction. The apostle Paul wrote, quoting Isaiah, “And the way of peace have they not known” (Rom. 3:17).

How true! I have stood at the very lectern in the United Nations General Assembly where so many presidents, prime ministers, dictators, kings and popes have called for world peace. I could not help but think of which person had ever made a permanent difference.

The governments of men simply do not work. They have never succeeded in finding permanent solutions to what are, for them, insoluble problems. It has not been given to men to understand the path to peace—or, for that matter, the way to abundance, happiness, health and prosperity. No wonder the greatest thinkers, leaders, educators and scientists have failed miserably in their quest for peace on Earth! God has not yet revealed to the vast majority of mankind the solution to its unending wars and world troubles.

In 1966, as God began to call me into His truth, I had the opportunity to meet with my United States Congressman from Ohio. I had applied to attend the United States Naval Academy and all applicants were required to have a personal interview with their Congressman in the final stages prior to acceptance. At the end of the interview, he asked me if I wished to ask him any questions.

I had only one.

I asked the Congressman his opinion of one world government—if it were in the hands of men. His answer was immediate and emphatic, “I do not believe it would work, but if I did, I would shout it from the housetops.”

This made a lasting impression. I have never forgotten my conversation with this Congressman of over 30 years’ experience in the federal government.

Since that time, many have suggested that one world government is the only way to world peace and stability. But many questions arise. Who would bring it? How would it be phased in? What laws would it administer? How would they be enforced? Would sovereign nations relinquish their authority to it? Would it succeed, or would it eventually oppress and enslave all mankind? These questions always stop thinkers, planners and leaders in their tracks!

Therefore, the end of strife, conflict, inequality and war the world over remains as elusive as ever. Everyone yearns for it, but no one knows how to obtain it. Why? Why cannot the experienced leaders and intelligent thinkers of our time find the way to peace?

The Bible is almost entirely a message about a coming world government. Prior to the birth of Jesus, an angel appeared to His mother, Mary. These verses describe this encounter and what she was told: “…the angel Gabriel was sent from God unto…Nazareth, to a virgin espoused to a man whose name was Joseph, of the house of David; and the virgin’s name was Mary. And the angel came in unto her, and said, Hail, you that are highly favored…you shall conceive in your womb, and bring forth a Son, and shall call His name Jesus. He shall be great, and shall be called the Son of the Highest: and the Lord God shall give unto Him the throne of His father David: and He shall reign over the house of Jacob forever; and of His Kingdom there shall be no end” (Luke 1:26-33).

Everywhere Christ went, He preached—announced—the coming of the Kingdom of God. Like a newscaster far ahead of his time, Christ foretold a complete change in the way the world would one day be governed. With this change would come unprecedented world peace, and happiness, harmony, universal health and prosperity. He explained that it would be a world-ruling government that would smash and replace all the governments of men—a utopian, wonderful world tomorrow.

When Christ commissioned His 12 apostles and sent them to preach, the instruction was to preach about the Kingdom of God (Luke 9:1-2). When He later sent out His 70 disciples (Luke 10:1), He also commanded them to preach the Kingdom of God (vs. 9). Paul preached this same “Kingdom of God” message everywhere he went (Acts 19:8; 20:25; 28:23, 31). The terms Kingdom and Kingdom of God are found scores of times throughout the New Testament. Yet it is absolutely astonishing how nearly everyone has lost the knowledge and true meaning of what this Kingdom is!

The word “gospel” derives from an Old English word meaning “good spell” or good news. The word “kingdom” also comes from an Old English term that simply means government. In other words, Christ preached “the good news of the government of God.” The coming of world peace, happiness, health and abundance will certainly be good news for a mankind that has not known it for 6,000 years.

Jesus Christ was born to be a KING, and when God’s government is fully established on Earth, it will usher in peace for all nations!

Consider Revelation 11:15: “The kingdoms of this world are become the kingdoms of our Lord, and of His Christ; and He shall reign forever and ever.” Just as there is no doubt that countries today represent real, literal, physical governments (kingdoms), this passage leaves no doubt that God’s government is also real and literal.

Have you ever been told about these passages? I never learned or even heard of them in the church of my youth—yet here they are, available with unmistakable clarity.

Matthew 24:27 states that Jesus will come like lightning shining from the east to the west. This will be an earth-shattering event no one could miss. But will He come to rule by Himself—or will there be others with Him? We could ask: When Christ establishes His supergovernment, who else might be part of the structure He establishes? If the governments of men require the efforts of many, who assist a supreme leader, is God’s government different?

Let’s examine some of what the prophet Daniel recorded about God’s Kingdom.

Notice that God will officially grant Christ the authority to rule the world: “There was given Him dominion, and glory, and a kingdom, that all people, nations, and languages, should serve Him: His dominion is an everlasting dominion, which shall not pass away, and His kingdom that which shall not be destroyed” (Dan. 7:14).

Again, we ask whether Christ rules alone, or are others to rule with Him? Exactly how does God intend to manage all the peoples and nations of Earth?

More verses in Daniel 7 are critical to understand. Notice: “But the saints of the Most High shall take the kingdom, and possess the kingdom forever, even forever and ever” (vs. 18).

Believe this verse for what it says! The ultimate calling of Christians is to join with Christ to share rulership in the Kingdom of God over all nations and all peoples. Truly, Christ will be “KING of kings and LORD of lords” (Rev. 19:16).

These other kings and lords can be you or anyone willing to accept God’s terms for entering His Kingdom.

Daniel’s prophecy concludes with further confirmation of the marvelous potential ahead for all who follow the truth: “And the kingdom and dominion, and the greatness of the kingdom under the whole heaven, shall be given to the people of the saints of the Most High, whose kingdom is an everlasting kingdom, and all dominions shall serve and obey Him” (Dan. 7:27).

What could be plainer? No wonder Jesus stated, “And he that overcomes, and keeps My works unto the end, to him will I give power over the nations: and he shall rule them with a rod of iron; as the vessels of a potter shall they be broken to shivers: even as I received of My Father” (Rev. 2:26-27), and He added, “To him that overcomes will I grant to sit with Me in My throne…” (Rev. 3:21).

The phrase “in My throne” is used because Jesus understood His throne is on this Earth. When Christ Returns, the saints will rule with Him—on Earth!—as spirit-composed beings in the Kingdom of God.

All who understand these truths need never again be “in the dark” about God’s Plan—or their awesome potential role within it. A new world order IS coming—but it is far from what men are planning.

Citing Isaiah 52:7, Paul also recorded, “How beautiful are the feet of them that preach the gospel of peace, and bring glad tidings [good news] of good things” (Rom. 10:15). He further cited Isaiah: “But they have not all obeyed the gospel. For Isaiah said, Lord, who has believed our report?” (Rom. 10:16).

Sadly, most people will not believe “God’s report” of what lies ahead for civilization. They will not believe that they are unable to bring world peace through human effort. Most will continue eagerly believing their false predictions, even in the face of abject failure.

I ask: will you do this?

I have barely scratched the surface of this subject. You should want to know more about it—including how you can fit directly into the coming world peace.

To learn much more about the role individuals will play in bringing an end to conflict, read my eye-opening book The Awesome Potential of Man. It contains scores of verses detailing the incredible human potential God desires for mankind—and for you!