This website requires the use of Javascript to function correctly. Performance and usage will suffer if it remains disabled.
How to Enable Javascript
The Vaping Crisis – Discerning the Facts from the Fog

Discerning the Facts from the Fog

An explosion of illnesses and deaths have been attributed to vape use, even though it has been seen as a safer alternative to smoking. Is society really better off? 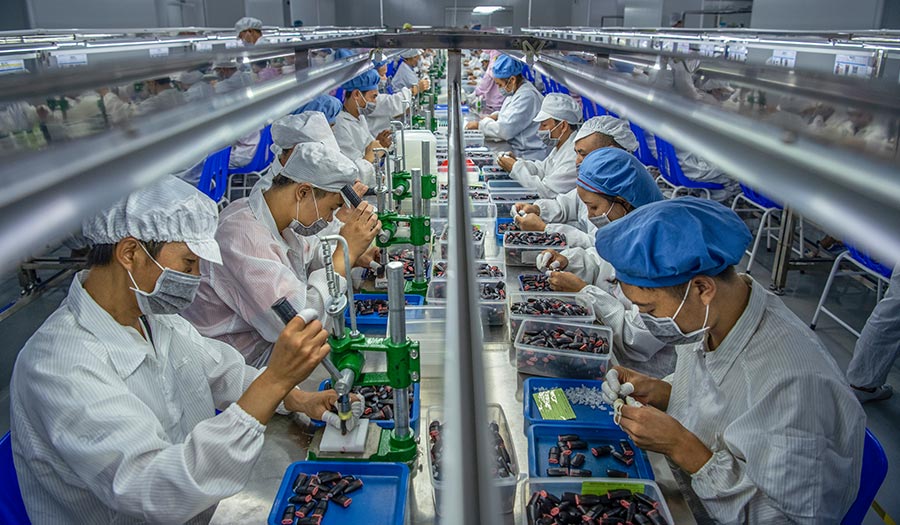 Workers make pods for e-cigarettes on a production line at Kanger Tech, one of China’s leading manufacturers of vaping products (Sept. 24, 2019).

Jay Jenkins entered a local convenience store and gas station with a friend. Noticing a cleverly marked package of cannabidiol (CBD) oil, he wondered, what is vaping like?

After purchasing the product, he took two puffs. What he experienced next was completely unexpected.

He said he quickly was “feeling crazy, not thinking straight, not able to move.” Seconds later, he experienced frightening hallucinations. Then he lost consciousness.

His friend drove him straight to the hospital. While there, Jay had seizures and difficulty breathing. He said it “felt like I was in hell” and that “I was already dead.”

Though this dramatic reaction is not typical of those who vape, it is not unprecedented. In Jay’s case, subsequent lab testing revealed he vaped a totally synthetic substance. Jay purchased a product wrapped and advertised as having CBD oil, which is derived from cannabis plants. The results showed what he smoked did not contain any of it!

Naturally, one would think the manufacturer would be liable—or at least could explain how a product marketed as containing CBD oil was mislabeled.

The CNN video describing his story reported there is no way to even know who manufactured the substance.

This example shows the complexity behind the vaping crisis today, one that has exploded in magnitude over just the past year.

On December 10, 2019, the United States Centers for Disease Control and Prevention reported 2,409 confirmed and probable cases of vaping illnesses. Illnesses have occurred in every state, the District of Columbia, Puerto Rico and the U.S. Virgin Islands. Fifty-two people in 26 states and the capital district have died. In addition, the CDC reported:

The first case in the U.S. occurred in late March 2019. Cases ramped up in late June and rose dramatically in late July.

Officials continue to find substantial numbers of U.S. patients who said they vaped only nicotine—the most recent report says 16 percent—and not THC, the psychoactive ingredient in cannabis.

These numbers show there is clearly some problem with vaping. Despite this, some argue the problem is merely because vaping products are not being regulated by the federal government. Ultimately, they believe it would be better for the portion of society that uses cigarettes and tobacco to move on to vaping as a healthier alternative.

Yet there is still too much uncertainty surrounding the products, and that is enough for most to say it should be prohibited. The American Medical Association called for an immediate ban on all e-cigarettes and vaping devices. Thirteen states have outlawed vaping in public areas where smoking cigarettes is not allowed.

Despite professed comparative benefits to smoking, vaping’s damaging effects have alarmed medical and public health professionals. Let’s cut through the marketing spin and get to the facts.

According to nonprofit Center on Addiction, “Vaping is the act of inhaling and exhaling the aerosol, often referred to as vapor, which is produced by an e-cigarette or similar device.”

Vape devices do not produce smoke, but rather an aerosol that is often mistaken for water vapor. The smoke-like appearance is actually fine particles that were vaporized by heat. When e-cigarettes were introduced to the U.S. in 2006, they were advertised as a healthy alternative to smoking.

Now there are a variety of vaping methods, including pens and JUUL boxes—which resemble USB flash drives. All devices have four simple components: a battery, coil, wick and cartridge containing e-liquid (or e-juice). Users press a button activating the heating component. This turns the e-liquid into the aerosol that is inhaled.

For cigarette smokers, the effect of inhaling and exhaling aerosol vapor satisfies the urge to smoke. For this reason, it is touted as a way for smokers to wean themselves off of cigarettes.

However, the illnesses and deaths associated with vaping show it is not a failsafe alternative. In addition, the products are often subject to false advertising.

Cigarette smoking is being replaced by vaping, particularly among high schoolers.

The percentage of high schoolers who reported smoking fell to 5.8 percent in 2019 from the prior year, a 28 percent drop and the largest since the U.S. government began surveying teens.

The decline among teens has been seized upon by vaping proponents, who argue it undercuts the gravest argument against the nicotine-emitting devices: that they act as a “gateway” to traditional smoking.

Yet, for one, experts on both sides acknowledge there is no definitive evidence linking e-cigarettes to the decline in youth smoking. The question is clouded by too many long-term trends and complicating variables. Teen smoking has been decreasing since the late 1990s and is influenced by government policies, public opinion, changing products and tobacco industry marketing.

Meanwhile, vaping use among high school students has increased more than cigarette use has decreased. Nearly 28 percent reported vaping in the last month, according to preliminary CDC figures for 2019. That number is up from 21 percent last year and 12 percent the year before.

Part of the reason for this is e-cigarettes, by their very design, have more appeal to teenagers and are more difficult to quit than traditional cigarettes. “With vaping everything flips on its head,” said Sharon Levy, the director of Adolescent Substance Use and Addiction Program at Boston Children’s Hospital. While in the past teenagers had to sneak out of school to smoke a cigarette, “we have kids that are only using [e-cigarettes] at school,” Dr. Levy said.

While vaping does produce an odor, it is far less than traditional tobacco or marijuana cigarettes. Often the tell-tale scents are masked by sweet-smelling flavors such as bubblegum or fruit.

In addition to being easier to hide, vaping devices contribute to a greater frequency of use and higher consumption of products such as nicotine. Some pods—which contain the ingredients that turn into vapor—contain the equivalent of 200 puffs of cigarettes (the same as one pack). Most users consume one pod a day.

Those who smoke typically end when they have burned through the cigarette. “For vapers, the feeling of being done only comes at the end of a pod, when they’ve inhaled about an entire cigarette pack’s worth of nicotine,” Wired reported.

Essentially, teenagers may be addicting themselves to vaping products at a faster rate than to tobacco products decades ago.

The question of how to quit the product evades researchers. “It’s a major research gap,” stated Rachel Grana, the program director at the National Cancer Institute’s Tobacco Control Research Branch.

And this may prove the greatest danger, that so little is known about the effects of inhaling various oils, flavor particles and other ingredients in vaping products. “We don’t know enough about the aerosol that vaping produces in terms of the short and longer-term health impacts,” said Dr. Anne Schuchat, the principal deputy director of CDC. “It may indeed be that the process itself is risky.”

Yet it is not just products cut with harmful substances that experts recommend avoiding. The CDC advises against vaping in any form.

What Can Be Done?

Like many problems facing humanity, vaping serves as a microcosm of why people cannot solve their own problems. After decades of tobacco companies and government regulators refusing to acknowledge the harm caused by nicotine, this cycle continues with vape products.

With the explosive increase of illnesses and deaths, this “healthy” alternative is, at best, questionable—and more likely part of the problem! Instead of seeing it as the lesser of two evils, society must realize it is another complex problem bringing a slew of unintended consequences.

In the end, the problem is larger than vaping. It is with the very nature of mankind. Our report on drug trends addressed this problem.

The report pointed to human nature as the cause of any drug crisis. It states: “Sadly, drug use continues to maintain a stranglehold on young people, stripping away their chance for stable, happy and productive lives. Scientific knowledge combined with escapism, experimentation and sheer boredom has resulted in mankind inventing many poisonous substances and deadlier forms of drugs. These are then mixed to create even more lethal concoctions.”

These begin to point to the root causes of the vaping crisis. They represent an overall breakdown in character both on the side of users and those in the industry. The focus is on pleasing oneself over others.

Almost no one knows that the law of cause and effect is the missing link to remedy humanity’s issues. Consequently, society focuses on treating the effects of crises—and almost never the underlying causes. Read Why Man Cannot Solve His Problems for more.