This website requires the use of Javascript to function correctly. Performance and usage will suffer if it remains disabled.
How to Enable Javascript
One Lesson to Learn from Government Shutdowns

One Lesson to Learn from Government Shutdowns

Every time Washington shutters its doors because it cannot agree—both Republicans and Democrats use this tactic—we should ask certain questions. Perhaps surprisingly, the answers are found in the Bible. 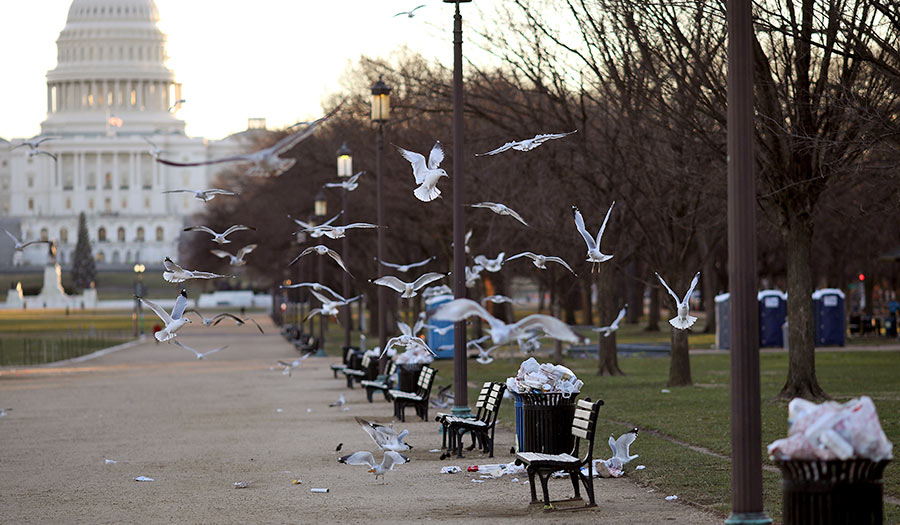 Win McNamee/Getty Images
Trash accumulates at the National Mall due to a partial shutdown of the federal government (Dec. 24, 2018).

Partial government shutdown. What an odd combination of words. First, how can the world’s most important government shutdown at all? Second, how are there parts of this ruling body that are non-essential? Who decides what is shuttered up and what stays open?

Yet government shutdowns are now a part of the norm in the United States. The only time we seem to pay attention is immediately before, during or after one. They quickly fade from public thinking. Few of us remember the 16-day shutdown in 2013, the 21 days over the turn of the year in 1996 or the 11 days in 1979. There are also heaps of one-to-three-day examples throughout the decades.

Despite being a crude political parlor trick, government shutdowns are here to stay—designed for the opposing side in Washington to get its way.

However, the results of these stalemates are anything but trivial. What will be the lasting effects of the latest and longest one—the 35 days from December 2018 to January 2019? What is the number one lesson we should learn each time the government shuts down?

When the shutdown was in full swing, businesses that rely on the patronage of government employees were some of the first to feel the effects. Among those hardest hit during the last shutdown were the owners of restaurants, hotels and gift shops near federal agencies and national parks around the country.

In Mariposa, California, just outside Yosemite National Park, tourism dropped sharply and most of the 6,000 county residents who work in the park were not paid during the shutdown.

“For my business personally it’s been absolutely devastating,” said Hanna Wackerman, co-owner of the 1850 Restaurant and Brewing Company. “Usually January is a pretty busy month for us. With the new snow being in Yosemite, that tends to bring new tourists to the park.” Instead, business went down 80 percent, she said.

Mike Lynch, owner of Western Heritage, saw online orders collapse almost immediately after the government shut down on December 22. The company sells buckles, keychains, commemorative coins and badges to employees of the Fish and Wildlife Service, the Forest Service, the Bureau of Land Management and other agencies. It also sells patches and some clothing.

Most of the purchases are discretionary and customized. For example, if a BLM employee is retiring, co-workers might order a plaque from Mr. Lynch’s company. His online orders went from thousands of dollars a week before Christmas to just $78 in the first week of January.

On January 7, Mr. Lynch laid off nearly everyone, leaving one person to answer the phone “in case someone wants to buy something.” They were the first job cuts in the company’s 43-year history.

With business so slow, Mr. Lynch did not order any of the bronze, silver or pewter he uses and did not replenish other inventory.

Larger companies are also affected, though it is typically easier for them to weather the impact. Airlines like Delta and Southwest, for example, lost tens of millions of dollars in business, but that is out of billions in revenue.

Economics were not the only effect from the shutdown. Trash overflowed at national parks and on the National Mall in front of the Capitol. There were also longer lines at airport security checkpoints. Businesses also could not receive small loans and key agencies, such as the IRS and the Securities Exchange and Commission, were operating at limited capacity.

Yet with the shutdown now in our rearview mirror, the lasting overall impact has come clear. The Congressional Budget Office reported it will cause slight permanent harm to the economy—about $3 billion.

The report stated the five-week shutdown has slowed growth in the near term but that most of the lost growth “will eventually be recovered.”

This news means one lesson from the shutdown will not be learned. We will likely see Washington shutter up the government again—each side demanding its way. The nation just narrowly avoided one on February 15.

Overall, CBO framed the economic damage to the U.S. It predicts that just $3 billion in lost gross domestic product will be permanently lost, a modest figure in a $20 trillion-plus economy. By year’s end, CBO says, GDP would be just 0.02 smaller because of the shutdown, which closed many domestic agencies. The 800,000 sidelined federal workers have returned to their jobs.

More broadly, the report estimates a drop in GDP growth to 2.3 percent this year as the effects of President Donald Trump’s tax cut on business investment begin to drop off. It also says that the U.S. budget deficit will hit $897 billion this year.

“The shutdown dampened economic activity mainly because of the loss of furloughed federal workers’ contribution to [gross domestic product], the delay in federal spending on goods and services, and the reduction in aggregate demand,” the report said.

“Underlying those effects on the overall economy are much more significant effects on individual businesses and workers,” CBO said. “Among those who experienced the largest and most direct negative effects are federal workers who faced delayed compensation and private-sector entities that lost business. Some of those private-sector entities will never recoup that lost income.”

Again, this is a lesson lost on Washington. Individuals are the ones most effected during a partial government shutdown. Yet the impact is too small to avert this political game of chicken being used again.

Each time the government shuts down, Americans get a hint of something. The economic impact is what draws most eyeballs, but there is another element to a shutdown that most overlook.

Here it is: Government is important.

Trash overflowing at national parks, backups on loan approvals, longer lines at airport security are a tiny taste of what government does for a nation.

While Washington and every other government on Earth are far from perfect, without them, everyday peace and safety unravel right quick.

Look around the world at nations with failed or failing governments. Nonprofit Fund for Peace uses the following criteria to flag nations as fragile states. They reveal how life looks without a stable governing body:

“Mounting demographic pressures and tribal, ethnic and/or religious conflicts.” The United Nations believes that in January 2018 hundreds were killed in tribal violence in the Democratic Republic of the Congo.

“Massive internal and external displacement of refugees, creating severe humanitarian emergencies.” The UN estimates over 2 million Venezuelans have fled their home country over the last couple of years due to food insecurity and a failing economy.

“Delegitimization of the state.” Venezuela again. As of this writing, the nation has two competing presidents.

“Widespread corruption.” Somalia—where bribing officials to allow for criminal activities is part of business as usual—ranks as the most corrupt state for 2018 according to the Global Corruption Index.

Other factors for fragile states from Fund for Peace include “severe economic decline,” “deterioration of public services,” “suspension or arbitrary application of law,” “widespread human rights abuses,” and “intervention of external political agents and foreign states.”

Without a stable government, these are the results. Any news watcher can see these conditions across the globe.

The lesson here is this: Even imperfect governments, such as those in the U.S. or the rest of the West, are better than no ruling body at all. Yet everyone wants a better government. Humanity yearns for it. If there was a way to bring about such a perfect administration, it would be the greatest good news of all time.

Unknown to most, there is such good news just over the horizon. It is tied to the word “gospel.”

Seem strange? The simple definition of this word is “good news.” In the Bible it often is phrased this way: “the gospel of the Kingdom of God.” Kingdom is just another word for government.

The central message of the Bible is the good news of the coming government of God.

Clearly, that government is not on Earth yet. If it were, God would be terrible at governing. When this time does arrive, here is how it will look…

“And He shall judge among the nations, and shall rebuke many people: and they shall beat their swords into plowshares, and their spears into pruninghooks: nation shall not lift up sword against nation, neither shall they learn war any more” (Isa. 2:4). Verse 3 shows that God’s holy, righteous Law will go forth to all the world.

“But they shall sit every man under his vine and under his fig tree; and none shall make them afraid: for the mouth of the Lord of hosts has spoken it” (Mic. 4:4). There will be peace, safety and abundance for all under the Kingdom of God.

“Of the increase of His government and peace there shall be no end, upon the throne of David, and upon his kingdom, to order it, and to establish it with judgment and with justice from henceforth even forever” (Isa. 9:7).

A government established forever that operates with true judgment and justice. No wonder God commands in Matthew 6:10 to pray “Your Kingdom come”!

To learn the fuller story of how the West’s bitter political infighting will end, and how safety and security will come to fragile states the world over, read Tomorrow’s Wonderful World – An Inside View!