This website requires the use of Javascript to function correctly. Performance and usage will suffer if it remains disabled.
How to Enable Javascript
Will Brexit Tarnish the US-UK Special Relationship?

The United Kingdom’s official exit from the European Union is less than six months away. How it will affect bonds between Washington and London remains to be seen. 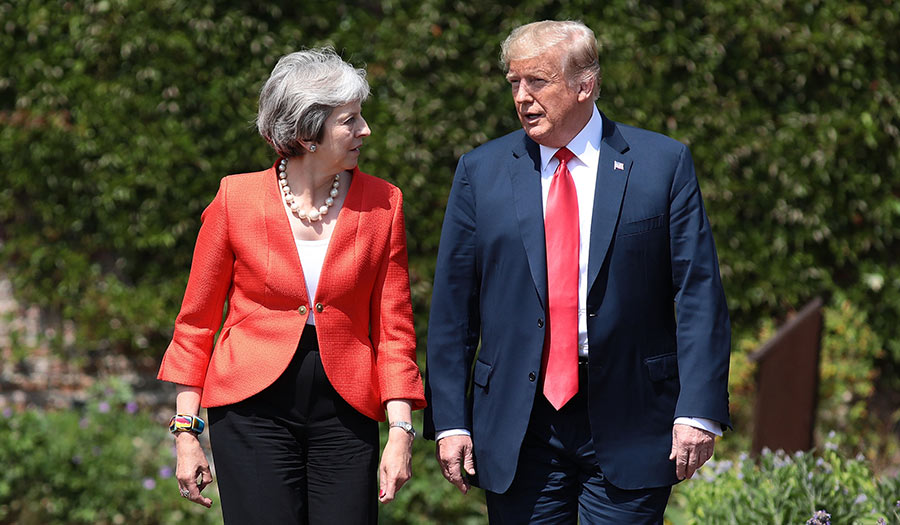 Before the Brexit vote on June 23, 2016, United States President Barack Obama offered his thoughts on whether the United Kingdom should leave the European Union. Soon after a slim majority of Britons voted to leave the power bloc, then-candidate Donald Trump stated his view.

Unsurprisingly, their opinions were polar opposites.

Mr. Obama wrote in The Telegraph that Britons should vote Remain, stating that the EU “magnifies” the nation’s influence. At another time, he stated that leaving the union would put the UK “at the back of the queue” for trade negotiations.

In July of the year, Mr. Trump praised Brexit, stating that the vote “took their country back” and called the move “brave and brilliant.”

Despite contrasting opinions, both men have praised the long-held “special relationship” between America and Britain.

It is easy for American leaders to weigh in on the thorny issue of Britain’s divorce from the European Union. The fierce debate is an ocean away from Washington and can seem to have minimal impact on the average U.S. citizen.

With the Brexit deadline looming—the official date for the UK to leave the union is March 29, 2019—all eyes are on whether Britain and the EU can strike a deal. This tunnel-vision view on whether the two parties can pen an agreement means the wider effects of the divorce go underreported.

Yet what effect will Brexit have on the United States? More specifically, could it strain the U.S.-UK special relationship?

Before discussing how Brexit will affect America, it helps to understand how difficult the negotiations are.

Everything in politics can be labeled “complicated.” Yet those involved in the Brexit negotiations know this label is a gargantuan understatement. Britain’s divorce from the European Union has been a disastrously messy process since day one.

There is what Britain wants: a better deal than it currently has with the EU.

There is what Europe wants: a worse deal for the UK than it currently enjoys.

At its core, this is the rub. British Brexiteers asserted that leaving the EU would be good for the nation. UK politicians are pushing to deliver on this promise to remain in power.

The last thing Brussels wants, however, is to allow the UK to leave with a bevy of perks EU nations cannot have. Such a move would send the wrong message to any nation thinking of canceling its EU membership. Europe’s leaders want to preserve the union. With this thinking, Britain must accept the negative penalties of leaving.

This whole scenario—one wanting a worse deal and the other a better—is complicated. Yet it drastically oversimplifies the Brexit negotiations.

What does Britain really want? According to recent polls, over half of the nation now wants to remain in the European Union. Of the half that does want to leave, the answers are all over the map. One extreme is a slightly modified version of staying in the EU, the other is a hard Brexit where the UK leaves with no plan in place.

Even within Prime Minister Theresa May’s Conservative Party, disagreement abounds. The governing party is deeply divided over the country’s impending departure from the EU, with pro- and anti-EU camps both criticizing the prime minister’s negotiations with the bloc.

What does the EU really want? Again, disagreement abounds. The 27 other nations in the European Union each have different economic and diplomatic relationships with the UK. Germany, for example, is most concerned with trade—wanting to ensure easy imports and exports after Brexit. Eastern Europe, however, does not care as much about the flow of goods. Half of the UK’s immigrants come from these nations, which means they want to preserve the freedom of travel to and from Britain. These former Soviet states also value the UK’s ability to take a tough stance against Russia—as it has the military might to do so and does not use Russian natural gas.

Even if an agreement is reached by the negotiators, then comes ratification. The European Council and European Parliament must both approve. And any individual EU nation may decide to put it to a public vote. Similar for Britain. The agreement must pass through Parliament with potential additions and amendments.

Unless an extension is agreed upon, all of this must happen before the end of March.

When the U.S. is brought into the sphere of Brexit negotiations, the first issue usually brought up is trade.

Many Brexiteers hope to negotiate free trade with the U.S. once Britain is out of the union.

An opinion piece in The Times of London made this case: “With six months and counting before the UK-EU divorce becomes official, Britons understandably are frustrated by the absence of post-Brexit clarity. Genuine concern, lingering misgivings about the referendum, and a series of government missteps have invited justified criticism, but also heaps of hyperbole and fear-mongering from politicians and opinion leaders across the ideological spectrum.”

The author attempted to cut through the pessimism: “The US and UK are natural candidates for a state-of-the-art, comprehensive trade agreement. British and US companies account for nearly $1.3 trillion of direct investment and employ 2.6 million workers in each other’s economies.”

True enough, a free trade agreement would be hugely beneficial to both parties.

Such an agreement may never happen, however, because the UK also wants to preserve trade with Europe. Currently, Brussels wants London to remain in its customs union and be accountable to the European Court of Justice. Remaining in the customs union (or a modified form of it) would mean Britain could not negotiate trade deals with other nations such as the U.S.

Also, while American investors currently use British companies as a gateway to free trade with the EU, Brexit may push them to move to an EU nation.

While the economy is a concern for the U.S.-UK special relationship, other matters may take greater importance—namely security and defense.

A report from nonprofit think tank RAND Corporation explored what post-Brexit could bring for the UK, EU and U.S.

“The US will greatly miss the influence and global perspective that the UK brings to EU decision-making, particularly around security and defense,” said Charles Ries, a vice president at RAND and lead author of the report.

He continued: “In fact, the UK’s EU membership often ensured that EU measures did not undermine NATO and the strong transatlantic partnership. The economic impact from Brexit is very much a secondary concern for the US.”

No matter how good the deal Britain receives from the EU, it will have to give up its influence on EU decision-making. It will no longer be able to debate and vote on Europe’s policy.

In addition, the report covered Russia: “Brexit could also affect the balance of EU policies towards Russia. Among important EU member states, the UK is unique in having no dependence on Russia for natural gas supplies, a result of its North Sea hydrocarbon discoveries. This strategic independence, its nuclear deterrent and the UK’s global outlook as a permanent member of the UN Security Council, have allowed it to support strong and consistent policies with respect to Russia.”

After Brexit, the U.S. will no longer have Britain’s political and military weight in Europe to advocate a strong stance against Russia.

Of course, it will take more than Brexit to sever the bond between London and Washington. It may even push the UK to rely more on the U.S. in a post-Brexit world. Certainly, there will be growth pains, but the “special relationship” first formalized by Sir Winston Churchill will continue.

Churchill used this term aside the phrase “fraternal association of the English-speaking peoples” to describe the friendship between the U.S. and UK during an address at Missouri’s Westminster College in 1946.

These two nations helped defeat Nazi Germany, stood in lockstep during the Cold War, and London offered its unwavering support in the early days of the war on terror in the early 2000s.

“Historian Anthony Seldon, who is currently writing a book on the bond entitled Special, tells TIME that the two countries have been intimately bound together over the past century by shared history, government structures, ideals and defense cooperation,” Time reported.

Mr. Seldon told the magazine: “It is the norm to be close, and it happens because of the overlap of three set of factors: a common enemy, personal chemistry and common ideological outlook.”

Yet the relationship between the U.S. and UK is anything but normal. Its ties run much deeper than typical international bonds.

There is little debate among historians that Great Britain had the largest empire the world has ever seen. And, by all measures, the United States is the wealthiest, most powerful and influential single nation of all time.

Yet few know why these two nations reached such heights.

The answer comes by rewinding history back before both world wars, before the American Revolution, before the Saxons invaded Britain, before the Roman Empire, before the Israelites settled in the Fertile Crescent…

Going way back to ancient times, the answer is found in the Bible.

In the Old Testament, God bestowed a special blessing upon the patriarch Abraham for his obedience. This decree passed to his son Isaac, then Jacob, who was told his descendants would become “a nation and a company of nations” (Gen. 35:11).

Scripture states that a nation and company of nations would rise on the world scene. This has only ever happened once in all of world history.

Add to this that these two world powers would come from brothers. The Abrahamic birthright blessing was passed to Jacob’s grandsons Ephraim and Manasseh, the sons of Joseph. It was from this pair of siblings that would later emerge the single-greatest nation and biggest-ever company of nations of all time: the United States of America and the British Empire.

This alone explains why these two nations rose to such great heights—and why they have such an unshakable relationship.

However, the Bible also explains in detail what the future holds for these peoples. While we cannot know how Brexit will specifically affect the U.S. and UK, there is a lot we can know.