This website requires the use of Javascript to function correctly. Performance and usage will suffer if it remains disabled.
How to Enable Javascript
No Place to Call Home – The Global Epidemic of Displaced Persons

No Place to Call Home

The Global Epidemic of Displaced Persons 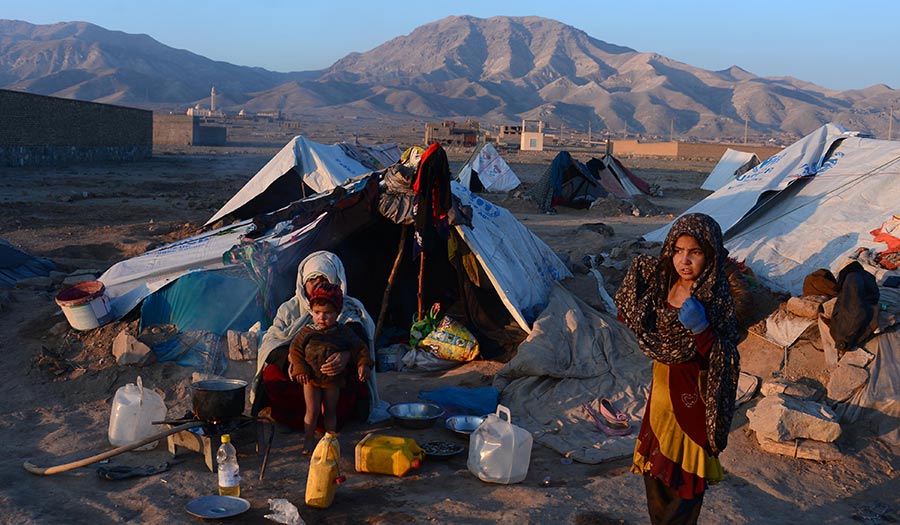 An internally displaced Afghan woman holds a child as she sits in front of her tent at a refugee camp in Afghanistan (Dec. 27, 2015).

Home. There is nothing like it. A place of comfort and safety from the elements. A warm bed to lay your head. A secure shelter to raise a family. A base of operations. A location with deep, meaningful ties to relatives and ancestors.

But for growing millions, home is becoming nothing more than a fading dream.

Never before have so many been forced to flee the place they call home. The United Nations Refugee Agency reports that 65.6 million people worldwide have been forcibly displaced—nearly 1 percent of Earth’s population. This exceeds the number of refugees after World War II. War, famine and persecution cause them to leave by boat, bus, car, foot—any means possible. Their names are often lost to history, only to be remembered by a few surviving family members.

If this group formed an independent nation, it would be the 22nd largest country in the world, with a population the size of the United Kingdom.

A 2016 report from the United Nations High Commissioner for Refugees (UNHCR) explained the gravity of the crisis: “Violent conflict and persecution, compounded by rising food insecurity, environmental degradation, poor governance and countless other factors, drove more than three million people to leave their countries as refugees or to seek asylum in 2016, joining millions of others already in exile. Many more people were trapped or uprooted inside their own countries. Political solutions and prospects for peace remained elusive in most situations…”

Within the overall number, 40.3 million people are internally displaced, meaning they are still living inside the border of their home country but were forced to flee their homes. Another 22.5 million people are refugees, those who had to leave their country entirely. Finally, an estimated 2.8 million are asylum seekers, those whose application to seek asylum in another country is awaiting processing.

On top of this, around 10 million people are completely stateless, with no country to call their own. The implications of this status are profound. This group of has no nationality, nor access to fundamental needs like education, employment, healthcare, or freedom of movement.

The United Nations global report added more about the enormous scale of the problem: “Behind this figure [roughly 67 million displaced] lie countless stories of hardship, grief and loss, of people forced to flee their homes, communities and countries, often struggling on the margins with few prospects to rebuild their lives, and of people excluded by statelessness from the full exercise of their rights.

“It reflects the impact and complexity of the upheavals that affected displaced populations, such as offensives in Iraq and the Syrian Arab Republic (Syria) that not only generated large-scale internal displacement, but also possibilities for some to return home.

“It speaks to the tragic deterioration from July onwards of the situation in South Sudan, which drove more than half a million people into exile during the last six months of the year alone.

“It encompasses those who fled conflict and violence in Burundi, Myanmar, the Lake Chad region, the Northern Triangle of Central America, and Yemen.

“It includes millions of refugees, internally displaced people and returnees affected by the unresolved situations in Afghanistan and Somalia.”

In Syria, a six-year civil war that continues to rage caused vast millions to leave. The bleak situation was made more real after the world was shown a photo in late 2015 of a drowned Syrian boy washed up on the shore of Greece. He was three years old.

A 67-year-old man named Ahmed told his story of loss as he left Syria for a new life in Malta. The UN recounted the events leading up to the sinking of his boat, were eight members of Ahmed’s family died: He “recalled the horrible day with a broken heart. He had organized the itinerary of his family’s flight well in advance from Syria. ‘Agents’ helped them to reach Libya, and from there, according to the deal, Tunisian smugglers should have transported them to Malta. But they got into the hands of a gang of Somalis, Libyans and Tunisians instead. They were kept locked up in a stable on a farm until the departure, that is until the smugglers managed to collect the number of refugees they wanted. Nobody was allowed to leave the building even for a minute. Days were passing and the price of the journey settled in advance rose all the time. Those women who were unable to cover the ever increasing amount got raped by their keepers, while the men got tied up and tortured.”

Eventually, after Ahmed’s family scrounged up enough money to pay the exorbitant fees, they were allowed entry onto the boat. But before departing, armed men again came, demanding even more money after seeing the amount of refugees onboard. The refugees came up with some extra funds and the boat left for Malta from Libya.

The account continued: “All of a sudden a ship emerged behind them with the militiamen on board and followed their boat for hours. They wanted to force it back to Libya. As these efforts failed, the gunmen started to shoot at the defenceless refugees and severely injured many of them. Soon the bullets punctured the boat, and it sank within minutes.”

Thirty-six people died in just this one story. Many more could have been included.

Most of the time, those who make the first step away from their home are in for a long, arduous journey to a safe country, assuming they survive. Such is the story of 16-year-old Sardar Hussain, who fled Afghanistan in 2014. While traveling to a hospital in Kabul with his father, sick mother and little sister, a roadside bomb killed all three of his family members and left him an orphan.

The New York Times reported his journey after he decided to leave his wartorn home: “Samie [Sardar’s nickname] sold all his parents’ possessions so he could pay a smuggling network $7,000 to get him to Australia. But upon arriving that November on the Indonesian island of Java—the last leg of the journey—he realized he had been tricked: The smuggler boats had stopping running because of a maritime crackdown by Australian authorities.

“With little money and no place to go, he and several other Afghan asylum seekers camped out for 51 days on a tiny street next to the United Nations refugee agency office in central Jakarta before he was admitted to a migrant shelter for minors. He was finally granted U.N. refugee status in November 2015, then waited an additional 14 months before learning that the United States would take him in and resettle him in Washington State. With an airline ticket for a Jan. 30 flight to Los Angeles, a letter from the United States Department of Homeland Security and a ride to the airport, Samie starting saying goodbye to refugee friends in Jakarta…”

“He is currently living in a boardinghouse reserved for refugees who are minors, run by a nonprofit aid organization. He had wanted to be resettled with an American family, in hopes of regaining what he lost in that bomb blast in Afghanistan. But that didn’t happen, and it’s unknown if it will.”

Violence, famine and terrible economic conditions in South Sudan required over 1 million people to flee to neighboring Uganda, which has opened its arms to assist refugees with a place to go. Over 1 million more escaped to other African countries in what is being described as the world’s fastest growing refugee crisis. The UN estimates that 85 percent of refugees from South Sudan who fled to Uganda are women and children. In fact, half of the 22.5 million global refugees are children under age 18.

Tabu Sunday, a 14-year-old girl, was designated by the UNHCR as the symbolic one-millionth South Sudanese refugee looking for safety in Uganda.

“Tabu and her siblings had fled fighting in their home town of Yei with their aunt. Her parents sent them to Uganda so that the girls could continue to go to school.”

“Where I was living they were killing people,” she recounted to the agency. “My parents said they didn’t have enough money for travelling. So we had to walk on foot with my aunt. It was a long and hard journey. We had to use the Congo route to reach Uganda. My aunt stayed for a week and decided to return home. After she left, we were playing with our foster parents’ children and their mother saw we were alone. She requested that we stay with her, here in her home.”

The UNHCR continued: “Home for Tabu is a 30-metre-square plot of land, which is given to all refugee families when they arrive. Tabu and her siblings lives in a separate building from their foster family, which gives the youngsters privacy to sleep, read and study.”

Besides war and famine, religious persecution is another major cause of the global refugee crisis. Take for instance the 600,000 Rohingya Muslims who recently had to flee Myanmar due to religious conflict. Hundreds of thousands are now trapped in Bangladesh simply due to being a minority in a Bhuddist nation.

As the world quietly watches increasing thousands flee their homes every day, relatively little is being done. Only a few are taking real action to solve this giant problem facing millions of the world’s helpless.