This website requires the use of Javascript to function correctly. Performance and usage will suffer if it remains disabled.
How to Enable Javascript
Puerto Rico in Survival Mode After Maria

The aftermath of the Category 4 hurricane has tested Puerto Rico’s national character. 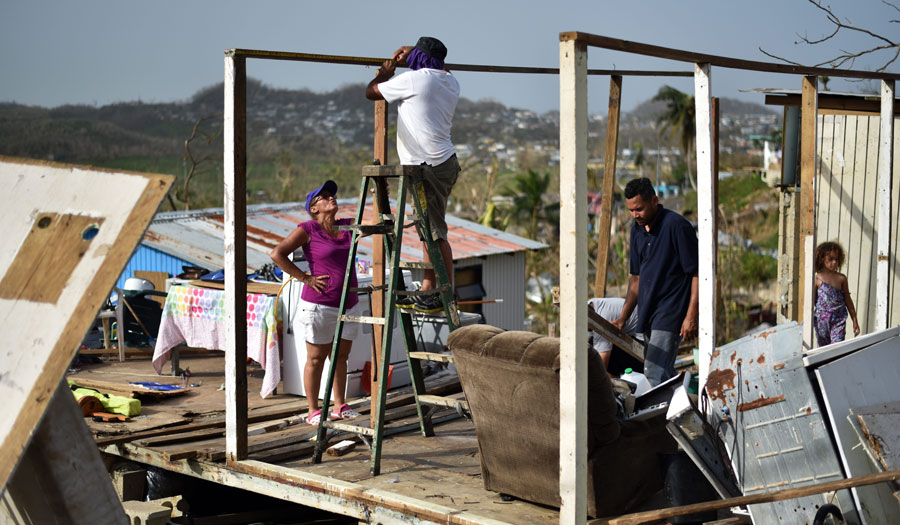 Starting anew: A family rebuilds their house destroyed by Hurricane Maria in the neighborhood of Acerolas in Toa Alta, Puerto Rico (Sept. 26, 2017).

A week after Hurricane Maria battered Puerto Rico, I texted a close friend who lives in the island’s town of Toa Alta.

There I was, a Puerto Rican myself, writing from Mississippi as a middleman between him and an 83-year old woman, whom he also knows well. In one sense, they were close to each other. She lives only a few miles away from Toa Alta in the town of Bayamon.

Yet, in terms of communication, there was a gaping chasm between them. Her landline was working, but not her cellphone. He could communicate through text, but not make phone calls.

I explained she needed water. His reply was, “OK. The water situation is complicated because they are stealing the potable water trucks.”

He added that “it is difficult to find water but we will find a way to take it to her.”

So was the situation for millions right after Maria. Food: scarce. Power: almost 100 percent gone across the island. Mobility: curfew from 6 a.m. to 6 p.m. Communication: unreliable at best—if in the right location.

The islands inhabitants have been living on edge since Maria swept through. Their ability to survive as a nation has been put to the test, and so has their ability to learn crucial lessons from this tragedy.

Amid the bleak conditions, Puerto Ricans’ resilience has shined through. The Miami Herald reported: “Left to fend for themselves a day after Hurricane Maria ravaged Puerto Rico and forced them into a primitive existence, San Juaneros took to the streets…to do what they say Caribbean people do best: Inventar. Figure it out.

“No electricity? A mustachioed man in a white undershirt played traffic cop at a Santurce intersection. No ambulances? A daughter borrowed her brother’s SUV to race her frail mother from the La Perla neighborhood to a hospital. No debris removal? A physician and two neighbors borrowed garden tools to clear main Condado thoroughfares on their own…‘Get busy!’ implored Dr. Joseph Campos, a 52-year-old…tree-trimmer in hand as he and his neighbors cut down a tree partially blocking access to a highway. ‘Even if all you can do is pick up a single, little branch. I’m not eating, and I’m healthy, and I’m working. You don’t have to sit home stress-eating.’”

The recovery in the first week after the storm was also mostly a do-it-yourself affair.

In the central town of Morovis, Manolo Gonzalez built a makeshift raft out of a plastic pallet buoyed by soda bottles to help neighbors ferry food, gasoline and other basic supplies across a river where the bridge was destroyed.

Someone had already strung a cable over the 100-yard stretch of river so people could hold on as they crossed in search of supplies.

“There’s no food over there,” Mr. Gonzalez said. “We have to help each other because that’s all we have.”

Elsewhere, the sentiment was the same. “There is a tradition here of people helping each other, especially during disasters,” Doris Anglero said as she looked for what was available in an Old San Juan supermarket.

Some disappointed shoppers were sharply aware that others have it worse. Mercedes Caro wept as she talked about her four grandchildren in Rincon, the western town that has been largely cut off from aid shipments as well as contact with the outside world. “Not knowing is so hard,” she said, turning to walk off.

With power out for almost the entire island, families were anxious to move out elderly and other vulnerable relatives.

Leaving, though, was a challenge. Just a few commercial flights were departing at first from the capital city of San Juan.

Yadira Perez Marcano was one of the few to snare a seat on the solitary Delta flight to New York City’s Kennedy Airport on September 26.

Passengers cheered when the plane landed, but Perez Marcano, whose apartment building in Bayamon, Puerto Rico, shook violently through the storm, said she had “mixed feelings” about leaving the destruction behind for the comfort of a sister’s home.

Maciel Garcia-Tilen of Miami said her elderly parents in Mayaguez, on the island’s west coast, told her over a borrowed cellphone that they had water and food for only another week. Ms. Garcia-Tilen said she wants to fly to San Juan as soon as possible to take supplies to the island and then fly her parents back to Florida.

Miguel Besosa, a retired truck driver in Hartford, Connecticut, has not been able to speak with his wife who was visiting her cancer-stricken sister in Ponce, on the island’s south coast, when the hurricane hit. He learned that she survived from a relative who found a working payphone, but he worries it will take weeks for her to find an available flight.

“At least they are alive,” said Mr. Besosa. “They are suffering a lot.”

For Puerto Ricans, hurricanes are as a reality of life as tornadoes in the Central U.S., ice storms in Northeastern U.S., earthquakes in Mexico, or volcanoes in Indonesia.

Maria is just the latest one. Back in 1989, I lived through Hurricane Hugo. It left us without electricity or water for a while, and I remember having to go to the river to obtain water. Between 1899 and 1929, four major hurricanes wreaked havoc on the population and economy. For example, Hurricane San Ciriaco in 1899 killed 3,000 people.

Each time, many Puerto Ricans have had to “start from scratch.” Some choose to leave the island and do so by saying no more to “hurricane alley.” Others stay back. Either way, they often must start anew, learn lessons, and hope life is stable again before another disaster strikes.

This reality has ingrained them with a unique dose of optimism, and the ability to jump into “survival mode.”

“We can live without power, but without water it’s harder,” 67-year-old Luis Torres told the Miami Herald after the storm. “If it rains today, I’m going to shower in it.”

The newspaper asked, “So why stay? Why insist on rebuilding? Torres pointed to the crashing ocean waves. ‘This is the best place to live in the world…’”

Living on a beautiful Caribbean island comes at a price—hurricanes come with the territory.

Therese Casper is an example of someone who quickly learned that. She and her husband had moved to Puerto Rico from Denver, Colorado, only a few weeks before Maria. Since the storm knocked out their power, they have been getting by in their dark, sweltering apartment on instant oatmeal and anything else they can cook on a propane stove as they wait for a flight back home.

“I tell my husband it’s like camping. It’s ‘Survivor’ Puerto Rico,” Mrs. Casper said. “It’s not what we bargained for.”

Yet hurricanes and other natural disasters have a way to wisen the survivors, if they allow it.

Some people do not learn much from their suffering, or that of others. They lament and complain about their losses, or resort to selfish acts such as stealing an entire water truck.

Others are grateful to have come out alive. They recognize that they were spared from sudden death. They take it in stride, seek to learn the lessons behind it, and move on.

I am privileged to know several people in Puerto Rico who think and feel the latter. Though you may never live through a Hurricane Maria, you can still learn from your difficult times as well. To learn how, read Why Does God Allow Suffering?