This website requires the use of Javascript to function correctly. Performance and usage will suffer if it remains disabled.
How to Enable Javascript
Has Uganda Solved the Refugee Problem?

Has Uganda Solved the Refugee Problem? 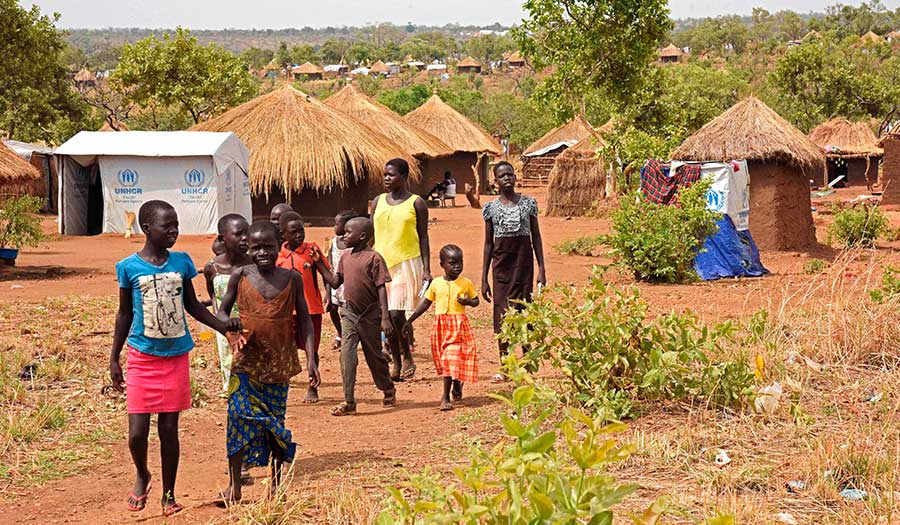 Imagine war breaking out in Los Angeles, Athens, Montreal or Rome—causing the entire population of just one of these cities (nearly 4 million each) to leave their homes to find refuge. If such an event took place, it would make headlines for months.

In South Sudan, there is no need to imagine—this is the grim reality. In less than four years, 4 million South Sudanese natives have been displaced from their homes and families are being torn apart by the nation’s civil war.

Salva Kiir, South Sudan’s president, and rebel leader Riek Machar stand in political opposition, both vying for absolute power over the nation. The violent struggle between these two leaders has forced nearly 2 million people to flee their homes and resettle within the nation, and caused another 2 million to flee the country.

An August 2017 United Nations Human Rights Commission statement expressed reports of “barbaric violence, with armed groups burning down houses with civilians inside, people being killed in front of family members, sexual assaults of women and girls, and kidnapping of boys for forced conscription.”

Over the last year, 1 million of these refugees have found safety in bordering Uganda. Led by President Yoweri Museveni, this nation is seen as a beacon of hope for those fleeing war-torn South Sudan.

Uganda’s open-door policy gives refugees and asylum-seekers relatively easy access to cross the border. Once refugees enter the nation, they are placed into some of the most hospitable and welcoming refugee camps in the world. Unlike most other nations, Uganda has established settlements where individuals and families can have a place to live and plots of land to farm.

Furthermore, Uganda helps refugees enter the workforce and educational system. The UNHCR reported: “Uganda has one of the most favorable protection environments for refugees, including freedom of movement, the right to work, own business and property, and access to public education and health services.”

These conditions and policies stand in stark contrast to the cruelty shown by Uganda’s previous government.

Alongside violations of human rights, oppression, extrajudicial murders, and rampant greed and corruption, one of Idi Amin’s most cruel actions was the blatant persecution of those of other races and political ideologies.

At the time, a great number of Asian migrants were living in the country, having established careers and started families. Many of these were entrepreneurs who helped strengthen and make viable the Ugandan economy through building infrastructure and running businesses.

In 1972, Amin forced all 60,000 Asians who were not Ugandan citizens out of the country. His stated reason: “The Asians were brought by the British here to Uganda. Therefore, the British are responsible to look after those Asians” (Discovery Civilization).

This abrupt expulsion of a middle-class workforce required Ugandan workers with virtually no entrepreneurial knowledge or background to run businesses. As a result, the economy quickly collapsed.

Bucking the trends of the Amin regime, current President Museveni’s government is working hard to revitalize Uganda. In addition, it has opened wide its doors, offering hope to those in need.

According to the State House website, Mr. Museveni explained that the principle of helping people who are fleeing a corrupt government to resettle was an African “concept of managing refugees before the colonialists came.”

“When there was a bad ruler or chief, there was withdrawing of allegiance from the bad ruler which in my language is called okwimuura,” he stated. “People would then pledge allegiance to a new kind of ruler which we call kwohengyera and would become permanent people of the new area.”

Mr. Museveni further expressed his desire that refugee children “get quality education because it would help them acquire new skills and regain the lost time during the fleeing.”

Yet this admirable solution comes with a hefty price tag, and the nation is being stretched to its limit because of the many benefits it is attempting to provide Sudanese refugees.

The Ugandan infrastructure is collapsing from the constant inflow of people. The largest settlement in Uganda, Bidi Bidi, is no longer able to receive those seeking asylum. With nearly 270,000 refugees located in that one settlement, availability of food, water and medical attention is thinning.

According to a statement by UN officials, children make up 62 percent of the total refugee population. Reuters reported that more than 100 children cross Uganda’s borders without a parent or guardian each day, totaling close to 9,000 unaccompanied minors. Providing education for youth is becoming increasingly difficult. Classrooms are overflowing and teachers are unable to keep up with the growing daily demands.

With the increasing number of youth among the refugee population comes another issue—early marriage. Noah Gottschalk, an Oxfam representative, said in an interview with NPR: “There is a rising problem of early marriage in the settlements. As people are finding that they have no other options to provide for themselves or their families, then to marry off their daughters for the bride price that they receive. When those girls get married, they’re not in school anymore. And that really deprives South Sudan of an entire generation of young people.”

Uganda’s infrastructure—roads, dams, railways and oil pipelines—is also ailing as a result of the crisis. Proposed infrastructure improvements for the coming years would cost billions of dollars, which would force the nation to rely on loans from other nations and only further hinder its ability to provide for refugees.

“All these projects have one thing in common: they depend on borrowed money, mainly from China,” The Guardian reported. “The infrastructure boom has increased Uganda’s exposure to debt and there are fears the country could be headed for a financial crisis.”

The refugee crisis has created an impossible situation for the African nation. It either collapses from insufficient infrastructure or suffers trying to repair and improve it. Despite the noble intentions of the Ugandan government in trying to help surrounding nations, its actions are inadvertently burdening the nation’s economy.

Across the globe, nations struggle with what to do with displaced individuals and families. Nations want to help those in war-torn or disaster-damaged areas. However, as is the case in Uganda, attempting to solve the refugee problem always brings about further problems—it always brings about more bad news.

What everyone wants is good news.

Unknown to many, the Bible term “gospel” means just that, good news. However, this is not just theological jargon or some feel-good idea. And the true meaning of this word is not what people think.

Rather, the gospel involves global solutions to mankind’s worst problems such as war, famine and disease. Read Which Is the True Gospel? to learn how this good news will affect everyone on Earth—and soon!