This website requires the use of Javascript to function correctly. Performance and usage will suffer if it remains disabled.
How to Enable Javascript
Hurricane Harvey: Why Tragedy Gets Our Attention

Hurricane Harvey: Why Tragedy Gets Our Attention

What lessons should we learn after witnessing Hurricane Harvey’s catastrophic damage in Texas and Louisiana? 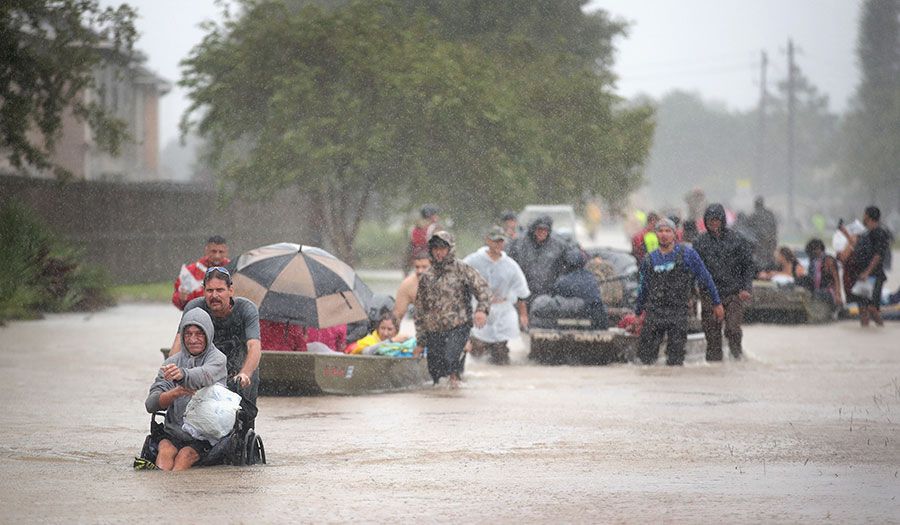 Scott Olson/Getty Images
Deluge: Houston, Texas, residents are rescued from a flooded neighborhood after it was inundated with rainwater from Hurricane Harvey (Aug. 28, 2017).

Samuel Saldivar escaped through the window of the van he was driving moments after it plummeted off a bridge into the swelling bayou below. He was not the vehicle’s only occupant.

Six others—the driver’s elderly parents and his brother’s four grandchildren—perished as the van’s sliding doors would not open under water.

In another area, a husband and wife had phoned 911 when the line went dead. Their bodies were later recovered from their truck, which was completely submerged in the flood.

During and after Hurricane Harvey struck southeast Texas, other victims were discovered floating inside their homes or businesses. Some were found near cars.

“The sad thing is, of the deaths we’ve seen, we’re going to see more, unfortunately,” the deputy director of the National Center for Disaster Preparedness at Columbia University said. “That number doesn’t stop moving up until we’re well into the recovery phase.”

While nowhere near the 1,800 who perished in Hurricane Katrina, the 47 storm-related deaths since Hurricane Harvey slammed into the Texas coast are a tragic outcome. Death gets our attention.

And so do water-covered streets, stranded vehicles, waterlogged homes, crowded relief shelters, as well as lack of plumbing, food and clean drinking water.

What Harvey lacks in death toll it makes up in sheer devastation and human suffering.

The 24.5 trillion gallons of water dumped on Texas and Louisiana in less than a week will take more than a month to fully drain in some areas. The storm damaged more than 150,000 homes, leaving some 35,000 residents homeless.

Texas Governor Greg Abbott said that more than 210,000 Texans have already applied for assistance from the Federal Emergency Management Agency. Officials from FEMA, which oversees natural disaster recovery efforts, expect these numbers to increase. The estimated $125 billion in federal aid needed for recovery is already higher than the $120 billion required for Hurricane Katrina.

Full recovery for the region will take many years.

Understandably, this storm has gripped the nation’s—and the world’s—attention. Tragedy forces us to put aside differences, disagreements and status-quo divisions. For those who lost homes and loved ones, it makes survivors take stock of their lives. For those watching the events play out from afar, it pulls at our heart-strings and makes us stop and consider.

But what deeper lessons should we take from a tragedy like Hurricane Harvey?

Rains from the first major hurricane to make landfall in the U.S. in 12 years just kept coming.

The storm, named Harvey in mid-August, started strong out over the Atlantic Ocean. Experts noticed that the storm weakened to a tropical depression when it reached the larger Caribbean islands and the north coast of South America. The cyclone eventually regained strength, becoming a Category 2, 3 then 4 hurricane, just before making landfall.

Harvey eventually came ashore with sustained winds of 130 mph, causing staggering damage. After making landfall, it went back out to sea and lingered off the coast as a tropical storm for days. The storm brought five straight days of rain totaling close to 52 inches in one location, the heaviest tropical downpour ever recorded in the continental U.S.

The weather event led to catastrophic flooding. Many Houston-area neighborhoods were left in a muddy brown pool. In some cases, only the tops of the tallest trees and homes poked above the surface.

While Harvey has finally begun to break up and merge with other weather systems far north of Texas and Louisiana, problems for victims in those states continue.

The storm knocked out municipal water service in some areas. Almost 120,000 residents in one Texas town waited in a line that stretched more than a mile just to get drinking water.

One Houston resident and her four children headed home after spending five nights in the city’s convention center with thousands of other evacuees. As she filled a relative’s SUV with bags of donated food and clothes, her mind could not escape the hazards such as downed power lines, gas leaks, and spoiled food sure to confront her at her rented home.

Cleanup itself poses dangers, as handling sodden debris such as wet carpet and other materials could lead to exposure to mold, which can cause respiratory problems if inhaled.

Remember, these are the homes that do not still have several feet of water in them or remain completely covered. And some structures that seem to have survived will still need to be abandoned and demolished because of the rapid growth of mold in this region’s warm climate.

Residents in one still-flooded part of the city of Houston were asked to evacuate ahead of the release of two reservoirs protecting the downtown area. These ongoing releases are expected to keep many homes filled with water for more than two weeks.

Search teams are going door-to-door in high-water vehicles and with search and rescue equipment, hunting for survivors or corpses that may have gone unnoticed. The streets are strewn with piles of trash and rubble. The mayor of one town is seeking $75 million in government aid for debris removal alone.

The effects from tragedies such as Hurricane Harvey linger for days, months, years, lifetimes. Each of the survivors must determine how to move forward from circumstances that were unimaginable just a week prior.

Yet life goes on. Governor Abbott has called for a “day of prayer” in Texas for the “healing of individuals, rebuilding of communities and the restoration of the entire region struck by this disaster.”

Human beings are incredibly capable of bouncing back. Yet they often fail to learn the lessons that should come from hardship.

For those who did not experience firsthand the 130-mph winds or have to clean out a flood-damaged home, the introspective effects of the tragedy are likely already beginning to fade. This process will understandably take longer for the survivors.

Before the floodwaters fully recede and rebuilding begins, what should we learn from an event like Hurricane Harvey?

A Bible passage in Ecclesiastes acknowledges that life is a mix of both good and bad. Anyone who has lived long enough knows this to be true.

This verse shows how we should react to the circumstances of life, most notably during the tough times: “In the day of prosperity be joyful, but in the day of adversity consider…” (7:14). The word consider here means to “think carefully.”

When the good times are rolling, human beings can naturally become consumed by pleasure-seeking, going from one distraction to the next. Life becomes an all-consuming pursuit of entertainment. This hyper-focus on amusement leads to a loss in perspective.

Events such as Hurricane Harvey snap us back to reality.

Pain—physical, mental or otherwise—is a masterful instructor. It has a remarkable way of teaching unforgettable and life-changing lessons. Suffering causes mankind to consider or “think carefully.” This principle lays a crucial foundation for understanding the greater purpose that adversity serves.

For more on this fascinating subject, watch David C. Pack’s World to Come video “Why God Allows Human Suffering.” It will change you!