This website requires the use of Javascript to function correctly. Performance and usage will suffer if it remains disabled.
How to Enable Javascript
The Age of Democracy?

The Age of Democracy?

Half of the United States pinned their hopes on a president who promised to be their voice in Washington. The other half feels obligated to protest and resist until they get their way. America’s government is caught in the middle and beginning to crack from the strain. 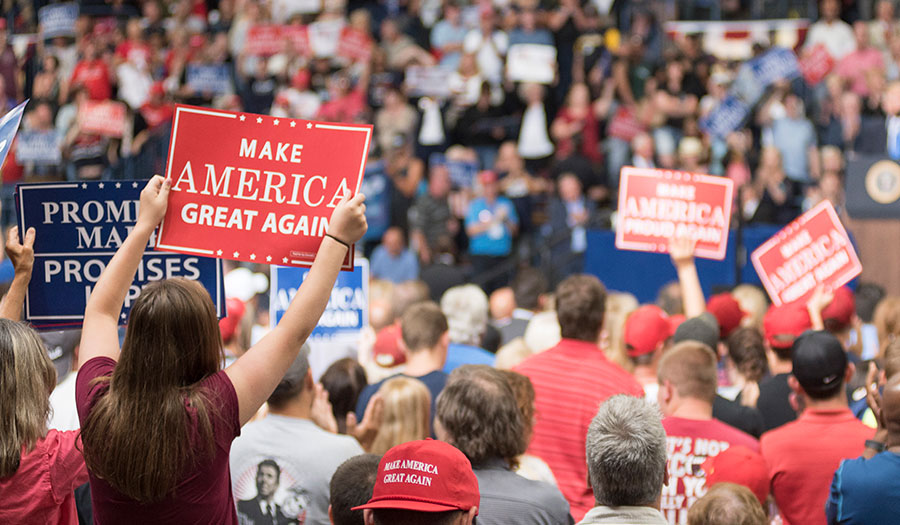 People still do remarkable things for their cause. Even in a time of decreasing patience and increasing apathy, thousands stood in line for hours under the sweltering summer sun.

But this day in the Rust Belt city was extra special. Seven months into his term, President Donald Trump—presidential entourage (and media) in tow—had escaped the confines of Washington, D.C., to visit the Steel Valley for another one of his campaign-style rallies. Some buzzed about seeing an American president in person for the first time. Others anticipated hearing from a man they regarded as their champion.

Defying the odds, Mr. Trump is now the most powerful man in the world. But more importantly to the blue-collar throng assembled to greet him, and the millions of other Americans who voted for him, he is their voice. Fed up with the political establishment, the president is their proof that America’s democratic system is still intact.

How else could you explain a political novice with an unorthodox style becoming the 45th president of the United States? Almost no one in the political establishment saw it coming.

No less baffling is how a billionaire real estate mogul from New York City has managed to take on the role of representing the common man. People with far less means claim this mega-wealthy businessman and leader of the free world as one of their own.

Admiring Mr. Trump’s unflinching persona and brash style, a 45-year-old Pittsburgh resident told The Real Truth before the event: “I’ve never seen anything like that. I have never seen anyone take on this whole establishment. Fearless.”

And this was not just a Republican heaping praise for one of his own. The man, who had previously voted for Democrats, explained why he backs Donald Trump: “He’s not a Republican, he’s not a Democrat. He ran against everybody, and won…and I’m not disappointed in the country. I’ve never seen anybody that actually delivered on their promises.”

Mr. Trump seems to have fully embraced his role as a hero for the people. His anti-establishment stance has been repeatedly pointed to as the reason he got into office. With his maverick use of social media and frequent visits to his supporters, the president has managed to pierce the thick cocoon typically surrounding the executive leader of America’s government.

“I’m here this evening to cut through the fake news filter and to speak straight to the American people,” Mr. Trump declared at the beginning of his address.

For the crowd, this was the sort of bold and nationalistic declaration that defines their man and reflects their views.

Mr. Trump said he relished being “back in the center of the American heartland, far away from the Washington swamp,” and added, “This has been a difficult week for the media because I forced them to travel with us all around the country and spend time with tens of thousands of proud Americans who believe in defending our values, our culture, our borders, our civilization, and our great American way of life.”

The media stood literally and symbolically opposite the podium behind a barrier only 50 feet away. This group of reporters, photographers and camera operators, no doubt familiar with the president’s barbs, were a tiny island in a sea of Trump supporters.

Real Truth staff witnessed the tense and often volatile relationship between the Trump administration and the mainstream media. As the president spoke about what he sees as biased media coverage, many in the crowd were visibly irate, pointing toward the press section, shouting “fake news” and other insults. The hostility was palpable. And though The Real Truth is a media outlet that does not take political sides and strives for neutrality, we were effectively lumped in with the rest of the press.

This growing aggravation is because supporters of the president see the media’s coverage of him as slanted and unfair. Their frustrations are not completely unfounded.

While presidents have always had detractors and those publicly opposing their views, the current relationship between the Oval Office and the press is beyond sour. Instead of striving for neutrality, numerous outlets have morphed into the mouthpieces of Mr. Trump’s political opponents. Most in the media did not expect a political novice and Washington outsider to win. Some go so far as to say he did not win—at least not fairly.

Much of the media, representing millions of people, openly discredit him and would like to see him removed from office.

For those who flooded to the ballot box and selected “Donald J. Trump,” the constant negative press can feel like a slight against them personally. They may think, No one has the right to say our votes did not count.

Yet those who got what they wanted in the last election are not the only believers in democracy.

Whenever either side loses, no one is willing to concede victory and wait four years for another shot. They cannot wait that long to be heard. Galvanized by the loss, millions feel obligated to ensure their vision for the country prevails.

Democracy, in its rawest form, has left the nation at odds and teetering. Does it surprise you to read this?

The term democracy is a combination of two Greek words: demos, meaning “the people,” and kratos, which means “power.” In a democracy, the people rule. They have authority to choose leaders and make decisions. The current political turmoil in America, the most powerful and prominent democratic nation on Earth, is by nature the result of this form of government.

We hear much about democracy as a superior form of government, but little about its flaws. What happens when, as we see today, the people in a democratic setting do not agree? You may say, “The majority rules.” But what about the 49 percent who disagree with the majority? Can their opinions simply be ignored? Are we stuck with an outcome simply because more people decided on it as the best course of action?

Also, since the U.S. is more correctly labeled a republic in which voters choose representatives who make political decisions for them, what if the decision of the majority is considered morally wrong by their representatives or vice versa?

These are just a few of the reasons British Prime Minister Winston Churchill labeled democracy as “the worst form of government, except for all the others.” A main problem is that this ruling system lacks a consistent central authority.

Many are surprised to learn that the word “democracy” does not appear in the Constitution or the Declaration of Independence. This is because democracy in its purest form is not what the Founding Fathers had in mind for the new nation. While they wanted to provide power to the citizenry and not a select group of wealthy aristocrats or bloodline rulers, direct democratic rule was beyond the scope of their intentions.

They instead recognized the importance of the rule of law—the principle that the law is the ultimate authority by which a nation is governed. American law was designed to prevail over the opinions of people. In other words, when all else fails, the law prevails. The architects of our government were on to something.

Democratic government emphasizes the will of the majority. Without a higher authority, however, opinion-based standards invariably lead to multiple viewpoints. This explains why the United States is experiencing a historic level of division. The president and the media are merely the faces of this widening rift.

While rule of law still does—for the most part—prevail in America, the tens of thousands of rules and regulations on the books are still not enough to regulate every current and emerging issue. There remain countless ways people can disagree on how to proceed in life, let alone how to determine national policies.

Yet, as unrealistic as it may seem, there is a set of laws that, if obeyed, would ensure peace, harmony and fulfillment among the people in this nation. Even more astonishing is that you can count the number of these laws on your hands. The Ten Commandments of the Bible encapsulate all the laws needed to govern a society.

Just 10 laws? That is not enough to regulate a neighborhood, let alone a nation of millions of people, one may think. However, it is! This becomes clear when you understand that the Ten Commandments are a set of spiritual laws that are a bedrock foundation for the more detailed laws needed in any society.

Understand. God is not against having laws beyond the Ten Commandments. In fact, He gave hundreds of them to the ancient nation of Israel while it was forming its government after God brought it out of Egypt. These laws were necessary to address more specific circumstances and conundrums that people would encounter.

The key is to understand that these 10 principles, established at the creation of mankind and repeated to Moses on Mount Sinai, form the core governance of human behavior. They are a lens through which all subsequent laws must be viewed and adhered to, with the first four addressing how to relate to God and the remaining six outlining how to relate to people.

To label the Ten Commandments as foundational is not a stretch. Many American ordinances were in fact developed with this ancient law in mind. However, as time passes, the nation moves further from this pattern. Instead of seeking a higher authority on matters of law, we have entered a time when people are turning inward, seeking to rule, judge and decide matters solely for and by themselves.

This behavior was foretold to occur. The Bible described a time when people would become very self-focused, ungrateful, corrupt and hateful (II Tim. 3:1-5). They would be filled with pride and hostility toward government or anyone in charge. This breakdown in character would drive people to take matters into their own hands instead of submitting to authority.

This should sound familiar—it is present not only in America’s political system, but in society as well.

There is a reason it is important for you to recognize this conduct—and it is beyond the realm of politics. This behavior was foretold to intensify in the “last days,” a reference to a time just before the return of Jesus Christ to Earth and intense world punishment. This prophecy was included in the Bible so that you can know what is coming!

Keep reading this magazine to learn more about what the future holds, and what comes after this age of democracy.