This website requires the use of Javascript to function correctly. Performance and usage will suffer if it remains disabled.
How to Enable Javascript
World News Report: June 2017 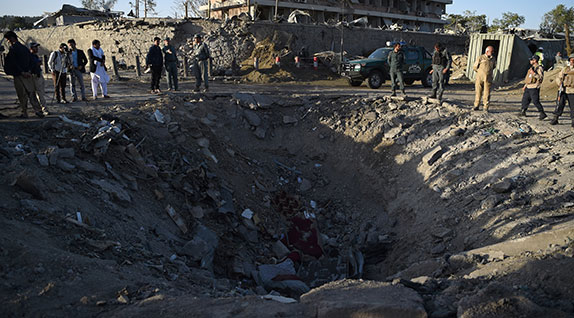 Wakil Kohsar/AFP/Getty Images
Impact: Afghan security forces and residents stand near a crater left by a truck bomb attack in Kabul, Afghanistan (May 31, 2017). Over 150 people were killed and hundreds wounded in the explosion.

Mankind has now formally reached the prophesied period that Daniel called “the time of the end” (12:4). Five verses later in Moffatt’s translation describes this time as the “crisis at the close.” This is so very true of today’s headlines. The world is in ALL-OUT CRISIS! Like the apostle Paul’s description of his personal trials—in II Corinthians 11:23-28 of three shipwrecks, beatings, imprisonment, hunger, thirst, perils of robbers, betrayals and many other things—all nations are being buffeted on every side by HUGE PROBLEMS.

But much of what is happening today is not being reported by the mainstream media, which is obsessed with Donald Trump’s supposed collusion with the Russian government to get himself elected. For example, one of the most stunning breakdowns in mankind’s longstanding inability to govern itself has been unfolding mostly under the radar in Venezuela. Led by a president enacting socialist policies, this country has nose-dived into a state of despair that few thought possible. Dozens have already been killed just in protests this year. An estimated 75 percent of Venezuelans have lost 19 pounds on average due to food scarcity. Already at 500 percent, the inflation rate is estimated to soon hit 700 percent! One in every four people are jobless. By every account, this is a disaster—a new failed nation on Earth.

One would think this story would be all over the evening news. But not in the lethargic, distracted, care-free nations of the West. Let’s focus a little on just Venezuela to understand the growing plight of many other nations. As the humanitarian tragedy worsens, the mainstream media simply “yawns” at it, as one media outlet observed: “Out of approximately 50,000 total evening news stories on ABC, CBS and NBC combined in the last four years, just 25 have covered the ongoing crisis in socialist Venezuela, according to a Media Research Center study…” (Lifezette).

Only a few are shining a spotlight on what is happening. Economic policy analyst Stephen Moore described the incredible conditions in this one nation in The Washington Times: “Venezuela is a human rights crisis of epic proportions with mass hunger, mass poverty, despair, ghetto upon ghetto, and a mass exodus of private businesses and anyone with money. There are no rich and no evil corporations to loot anymore…The Wall Street Journal reports that Venezuela now employs 100,000 security forces—not to repel foreign threats or invaders, but to keep the government leaders like corrupt President Nicolas Maduro safe from their own citizens. Adjusted for population size, this would be the equivalent of one million Americans employed every day to stop riots in the streets…” (italics mine).

“The average pay has fallen to less than $50—not per day, or week, but per month. How’s that for a minimum wage? The people eat dogs if they can find them and the world was shocked by the story earlier this year of the raid on the municipal zoo to eat the animals. How bad off does a population have to be to start carving up elephant meat? The burgeoning resistance throws Molotov cocktails, rocks and even human feces at the security forces during the nonstop rioting…”

How sad that millions must suffer as humanity learns these bitter lessons. But how wonderful that God’s Kingdom is just over the horizon, a government led by those who truly care about people and can provide their basic needs—food, water, shelter and security.

The author spoke to one of the main causes behind the conditions—socialist policies: “Wait, I thought socialism was supposed to create a worker paradise. It turns out that share the wealth eventually means there is no wealth and the egalitarian dream means everyone becomes equally poor. Venezuela is on its way to becoming the next North Korea” (ibid.).

True Christians understand that EVERY form of men’s government—none of which are built on the bedrock foundation of God’s laws—eventually collapses. Like the second law of thermodynamics, everything in the political “universe” tends toward disorder. Entropy is all around us, including within the governments of men.

The United States is also almost literally falling apart, but in different ways. The organized “Resistance” to the administration is growing stronger by the day—every day. The most egregious demonstration of the hatred toward Mr. Trump came on the morning of Wednesday, May 31. A comedian was photographed holding a fake cut-off head of the president. She released a less-than-sincere apology only after the backlash grew. As a student of history, this level of vitriol is unprecedented in American history. That it can be spread on social media across the country within an hour or even minutes greatly exacerbates the damage.

Then there is the “deep state”—a secretive group of government workers within intelligence agencies (but also other departments) who are working to undermine and overthrow the presidency. A recent article by Kimberley Strassel in The Wall Street Journal described just one example of the deep state within the Environmental Protection Agency:

“[One powerful] government employee [is] using taxpayer funds to gather political activists on government grounds to plot—let’s not kid ourselves—ways to sabotage the Trump administration…Mr. Obama worked hard to embed his agenda within government to ensure its survival. Today it is the source of leaks, bogus whistleblower complaints, internal sabotage.”

President Trump recently left behind the roiling waters in D.C. to take his first overseas trip in office, visiting Saudi Arabia, Israel, Belgium and Italy. While in Brussels, Mr. Trump sent a strong message to NATO members about paying their fair share. This is having ripple effects in Europe, especially between America and Germany.

The “rumors of war” that Jesus warned about are not slowing down. North Korea tried the world’s patience by conducting (in one after another) its now ninth missile test—a Scud-class ballistic missile that landed in the sea off its east coast. This was the third test in less than three weeks.

The Telegraph reported, “The launch was aimed at testing a weapon ‘capable of making ultra-precision strike on the enemies’ objects at any area,’ [North Korean state-run news agency] KCNA said.”

Republican Congressman Adam Kinzinger, an Iraq War veteran, recently warned that every time Pyongyang tests a missile it learns more about how to improve its program. The United States conducted its own missile interceptor test, which was considered a great success—essentially a bullet fired to hit and destroy another bullet in outer space. These tests are occurring more frequently as nations demonstrate their military capabilities. The system still needs more development as it only has a 40 percent overall success rate. China is reportedly attempting to rein in North Korea but has had little success.

Of course everyone by now must know that in Manchester, United Kingdom, 22 people were killed and 116 injured recently at a concert when a homemade explosive containing nuts, bolts and nails was detonated. Among those killed (in some cases literally destroyed) were children as young as 8, a 14-year-old girl from Scotland, an off-duty police officer, many teenagers, and parents coming to pick up their children. ISIS was quick to claim responsibility for what was the worst terror attack in the UK since the London bombings in 2005!

In the latest terrorist attack in London, a van mowed down pedestrians on London Bridge, killing eight and injuring 48 people. The three men in the van then went on to stab patrons at the nearby Borough Market.

On Wednesday, May 31, a truck bomb exploded in Kabul, the capital of Afghanistan, shattering windows within a mile of it and leaving a 13-foot crater at the center of the destruction. Over 150 were killed and at least 460 wounded in what was perhaps the worst attack of such kind in the War in Afghanistan.

In the wake of such terrible news, many wonder about the future. To learn more about how the violence will end, read our booklet How World Peace Will Come!