This website requires the use of Javascript to function correctly. Performance and usage will suffer if it remains disabled.
How to Enable Javascript
The Fight Against Famine

The Fight Against Famine 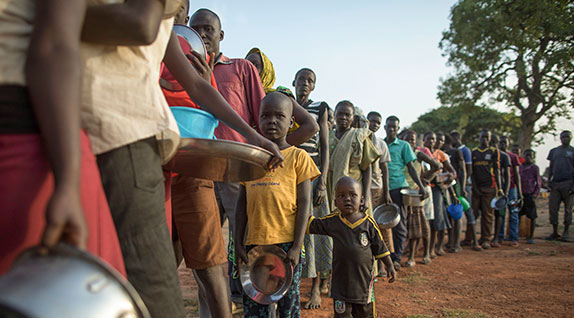 More than 795 million people across the globe—one in nine—suffer from chronic undernourishment, yet food is plentiful throughout the world.

According to the Famine Early Warning Systems Network, which ranks levels of hunger across the world, three factors have been driving food insecurity this year.

The organization reported that “persistent conflict is disrupting livelihoods, limiting trade, and restricting humanitarian access across many regions, including the Lake Chad Basin, the Central African Republic, Sudan, South Sudan, the [African] Great Lakes Region, Somalia, Yemen, Ukraine, Syria, Iraq, and Afghanistan. A second important driver is drought, especially those driven by the 2015/16 El Niño and the 2016/17 La Niña. In Southern Africa and the Horn of Africa, significantly below-average rainfall has sharply reduced crop harvests and severely limited the availability of water and pasture for livestock. In Central Asia, snowfall to date has also been below average, potentially limiting the water available for irrigated agriculture during 2017. Finally, economic instability, related to conflict, a decline in foreign reserves due to low global commodity prices, and associated currency depreciation have contributed to very high staple food prices in Nigeria, Malawi, Mozambique, South Sudan, and Yemen.”

For the first time since 2011, famine was officially declared in parts of South Sudan—where more than 40 percent need urgent food assistance. Three other nations—Somalia, Yemen and Kenya—have been classified as being on the brink of famine.

“When you declare a famine, bad things have already happened,” Arif Husain, the chief economist for the World Food Program (WFP) in Rome, told The New York Times. “People have already died.”

According to the outlet, “Famine…is declared after three specific criteria are met: when one in five households in a certain area face extreme food shortages; more than 30 percent of the population is acutely malnourished; and at least two people for every 10,000 die each day.”

Just to avert the current crisis in South Sudan, Somalia, Yemen and parts of Nigeria, United Nations Secretary-General Antonio Guterres said in a press briefing that it would “require more than $5.6 billion this year,” with $90 million having been “received so far—around two cents for every dollar needed.”

Why in a “world of plenty,” as Mr. Guterres put it in a speech after returning from a trip to an area where 20 million people face famine, is this occurring?

Famines often emerge in the wake of natural disasters, crop blight, and severe weather patterns. In the case of South Sudan, however, the famine there is not due to scarcity of food, but rather to an ongoing civil war, which resulted in the United Nations officially declaring it a disaster area, according to National Public Radio.

“This famine is man-made,” WFP Country Director Joyce Luma said in a statement on the organization’s website. “WFP and the entire humanitarian community have been trying with all our might to avoid this catastrophe, mounting a humanitarian response of a scale that quite frankly would have seemed impossible three years ago. But we have also warned that there is only so much that humanitarian assistance can achieve in the absence of meaningful peace and security, both for relief workers and the crisis-affected people they serve…”

The organization continued: “Across the country, three years of conflict have severely undermined crop production and rural livelihoods. The upsurge in violence since July 2016 has further devastated food production, including in previously stable areas. Soaring inflation—up to 800 percent year-on-year—and market failure have also hit areas that traditionally rely on markets to meet food needs. Urban populations are also struggling to cope with massive price rises on basic food items.”

Meanwhile, “Violence in Yemen, according to the U.N., has left 18 million people—nearly two-thirds of the country—in need of humanitarian aid,” National Public Radio reported. “Drought combined with chaos and extremist militants in Somalia are leaving millions hungry there. And in West Africa, Boko Haram fighters have terrorized people across large swaths of Northern Nigeria, driven farmers from their land and left a massive food shortage in their wake.”

The concept of famine being a result of conflict is not new. Stephen Devereux, editor of The New Famines: Why Famines Persist in an Era of Globalization, wrote in his book that the worst famines throughout history were a result of political decisions.

Andrew Renneisen/Getty Images
Medical treatment: A 5-year-old child cries next to his mother and brother as a nurse struggles to find a vein for an injection at a government-run health clinic in Shada, Somalia (Feb. 25, 2017).

In an interview with The Economist, “Mr Devereux [reckoned] that in 35 big famines since 1900, more than 70m people have died from famine or famine-related causes. Of these, almost half perished in one terrible event: China’s Great Leap Forward of 1958-62, which caused famine deaths of over 30m…Another quarter died during Stalin’s forced collectivisation of the Soviet Union in the late 1920s and early 1930s (especially in Ukraine and Kazakhstan). The other huge famine was that in Bengal in 1943. Since these countries have transformed their food security, famine mortality has declined over the past century and shifted from Asia to, almost exclusively, Africa. Political crises have triggered famines in sub-Saharan Africa since the 1960s, including those in Ethiopia in 1983-85 and Sudan in 1998. The rains failed throughout the Horn of Africa in 2010-12, but famine deaths were concentrated in Somalia, where the government was weakest.”

Many times, suffering countries turn to neighboring countries for assistance, which in and of themselves are unable to help, as in the case of Somalia and the bordering nation of Kenya.

“Kenya itself is also suffering from the effects of the regional drought: rates of acute malnutrition higher than 30 percent have been reported in three northern counties; 100,000 children under five are estimated to be severely malnourished; and up to three million people face a food security crisis and require assistance,” IRIN News reported.

More than 50 countries have levels of hunger considered “serious” or “alarming,” according to the International Food Policy Research Institute’s “2016 Global Hunger Index: Getting to Zero Hunger,” with women making up 60 percent of the world’s hungry.

In Asia alone, two out of three people suffer from food insecurity: “Hunger continues to take its largest toll in terms of the number of people impacted in Southern Asia, which includes the countries of India, Pakistan and Bangladesh,” the World Hunger Education Service reported.

Asia is often not even mentioned in terms of its food insecurity on the world stage, but according to CNN more than 490 million people there routinely go hungry.

“The Asia-Pacific region is home to more than half a billion (62 percent) of the world’s undernourished people and over 100 million stunted children, resulting in the suffering of millions and, all too often, premature death,” the Food and Agriculture Organization of the United Nations reported.

“This is unacceptable in a region which has been showing strong economic growth in recent decades. It is also home to a vast majority of the world’s smallholder farmers who presently produce enough food for all.”

And while countries in Central and South America have been largely successful in decreasing malnutrition, Venezuela recently declared a food emergency, with almost nine out of 10 civilians lacking access to food due to political conflicts and economic decline.

“A staggering 87 percent of Venezuelans say they do not have money to buy enough food, the most recent assessment of living standards by Simon Bolivar University found,” The New York Times reported.

The outlet highlighted the growing violence at empty supermarkets, crop warehouses, and in the middle of highways, where civilians have begun halting and looting trucks transporting the limited food supplies left in the nation.

“Venezuelans have been suffering food and medicine shortages for months, leading many to skip meals or go without crucial treatment,” Channel News Asia reported. “Lines of hundreds form in front of supermarkets as people jostle for hours under the hot sun hoping price-controlled rice or flour will be delivered.”

While famines due to weather patterns and political conflicts have always been a problem, unlike any other time in history, there is enough food available to feed everyone across the globe. But lack of resources and access prevent it from being distributed.

“The world produces 17% more food per person today than 30 years ago,” Oxfam Canada stated on its website. “But close to a billion people go to sleep hungry every night.

“The problem is that many people in the world don’t have sufficient land to grow, or income to purchase, enough food.”

“Even though the global population more than doubled between 1961 and 2013, the world produces around 50 percent more food for each of us today—of which we now waste about a third. Even after diverting roughly half of the world’s grain and most soy protein to animal feed and non-food uses, the world still produces enough to provide every human being with nearly 2,900 calories a day. Clearly, our global calorie supply is ample.

“Increasingly, however, calories and nutrition are diverging as the quality of food in most parts of the world is degrading. Using a calorie-deficiency standard, the UN estimates that today roughly one in nine people is hungry—about 800 million; but adding measures of nutrient deficiencies as well, we estimate that a quarter of the world’s people suffer from nutritional deprivation.

“Food scarcity is not the problem, but the scarcity of real democracy protecting people’s access to nutritious food is a huge problem. So, fighting hunger means tackling concentrated political and economic power in order to create new equitable rules. Otherwise hunger will continue no matter how much food we grow.”

“‘I continue to reiterate the same message to all: only a political solution will ultimately end human suffering and bring stability to the region,’ he said, noting that with access and funding, humanitarians will do more, but cautioned that relief-workers were ‘not the long-term solution to the growing crisis.’”

As stated time and time again in The Real Truth magazine, only a government free from the hands of corrupt minds, amoral political leaders, and inept civil servants can bring about real and lasting solutions to humanity’s ever-growing problems—including famine. Thankfully, a world supergovernment led by tried and proven leaders is just on the horizon, as announced almost 2,000 years ago (Mark 1:14-15).

That government of divine, incorruptible, character-driven leaders will soon be here!