This website requires the use of Javascript to function correctly. Performance and usage will suffer if it remains disabled.
How to Enable Javascript
World News Report: January 2017 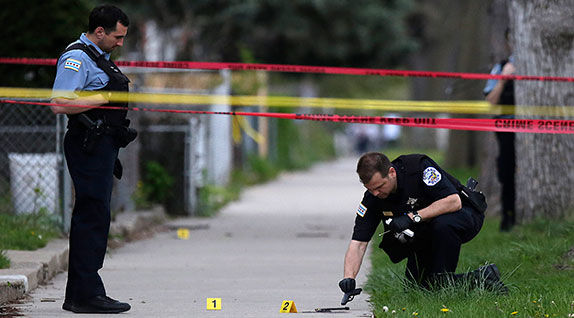 Joshua Lott/Getty Images
Deadly trend: Chicago police officers investigate a scene where a 16-year-old and 18-year-old boy were shot in Chicago, Illinois (April 25, 2016). More murders occurred in this city than any other in the United States throughout the year.

So many in the world looked back on 2016 and must surely have fallen into a state of depression. Many people wrote off 2016 as the “worst year ever.” Despite their many differences (political, religious, etc.), people seem to have found common ground on this point. (But every remaining year will now be worse than the last one.) A popular news anchor’s microphone was cut off by the network on New Year’s Eve after he started to rant about how “awful” 2016 was. A cartoon showed a man throwing the number “2016” into the garbage. With even a brief look at what took place over the last year it is no wonder so many feel this way.

The global political map was shaken up in shocking ways. Who does not know that the most vicious presidential campaign in American history took place in 2016? The crime rate was up in many places across the nation. Chicago’s murder rate was higher than that of a larger New York City and also a larger Los Angeles combined, and was the worst in 19 years. It was also a year of unprecedented TERROR. Man’s creative genius was unleashed in darker and more twisted ways. Mass graves of Islamic State victims are being unearthed across Iraq and Syria. Captured Turkish soldiers were burned alive on video and posted as a warning to the world. And children were increasingly used as weapons in bombings.

The year 2016 was also one that exposed the world’s apathy toward evil. Think back to the heartbreaking photo of a Syrian boy who was rescued from the rubble of an airstrike in Aleppo. The world shed tears over the image, but then did nothing. Nations sat silently on the sidelines as Syria’s brutal regime decimated Aleppo.

Garry Kasparov, a famous former world chess champion and now outspoken freedom activist and author, indicted humanity and the world’s greatest nations in a recent Wall Street Journal article: “The internet was going to connect every living soul and shine a light into the dark corners of the world. Instead, the light has reflected back to illuminate the hypocrisy and apathy of the most powerful nations in the world. Crimea is annexed, Ukraine is invaded, ISIS is rallying, Aleppo is laid waste, and not a one of us can say that we did not know. We can say only that we did not care.”

Billions of children spend each day in a desperate search for food, with many ultimately starving to death. Meanwhile, billions of dollars are spent in research facilities across the West developing robots and artificial intelligence. And due to a growing chorus of experts warning that colonizing Mars may be man’s only hope, incredibly, companies are actually spending vast amounts of money to make this vision a reality. Imagine if those resources were redirected toward solving disease, famine, poverty, ignorance and war. But people should realize that, with more money, men would botch the solutions and leave the world with greater and worse problems.

Freedom is not on the march. Nearly one-third of humanity—2.7 billion people—live under a dictator. Europe is being crushed under the weight of its growing problems. The Middle East is on fire. Just think of the recent political upheaval between the United States and Israel—but also between Israel and practically the whole world.

The world is awash with violence, hatred, betrayal, immorality (and amorality), depravity, loneliness and confusion. Billions in every corner of the globe see these conditions swirling around them. They raised their champagne glasses on January 1 at 12:00 a.m. and toasted a new year filled with hope.

But is there reason for the masses to be hopeful for the future?

Which college, newspaper, company or church is providing real answers to the question of WHY the world is the way it is? All these institutions do not have an explanation because they are utterly CUT OFF from God’s revealed knowledge about man’s state of affairs. Only one organization is announcing a message of real hope for mankind. Only one group is bringing people the truth of how God plans to intervene in world affairs. We know there is hope for the future, but it will not come in the form the world expects. Only the coming KINGDOM OF GOD—led by Christ and His “little flock”—can bring lasting solutions to man’s many problems. (To learn more about God’s Kingdom, read our booklet How God’s Kingdom Will Come – The Untold Story!)