This website requires the use of Javascript to function correctly. Performance and usage will suffer if it remains disabled.
How to Enable Javascript
The Election Everyone Missed

The Election Everyone Missed

Few noticed the selection of a leader in one of the world’s most powerful positions—one that aims to bring global peace and unity. 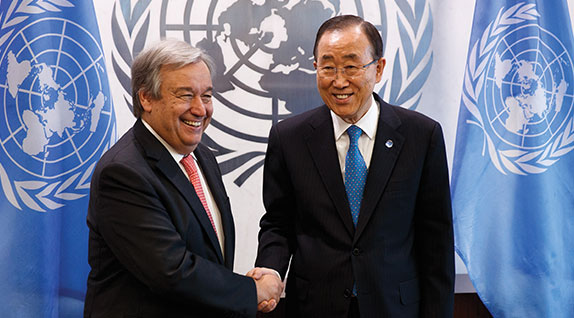 With the United States presidential election looming, a bitter war of words and wills raged. Soon-to-be voters latched onto the juicy details of one scandal after another. Salacious revelations and hyperbolic headlines reigned supreme.

Amid a maelstrom of pervasive attack ads, daggers-drawn debates, and even political persecution from friends and family, the public missed a rare showing of international unity.

In early October, Russia, China, America, France and Britain all agreed to elect Antonio Guterres to become the ninth secretary-general of the United Nations. The near-unanimous vote from the Security Council was 13 “for” with two abstentions. Days later, all 193 member states of the United Nations passed a resolution declaring Mr. Guterres the new leader as of January 2017.

Samantha Power, the U.S. ambassador to the UN, called the process “remarkably uncontentious” and “uncontroversial.”

The overwhelming victory for the former prime minister of Portugal and current UN high commissioner for refugees signaled a new era for the world’s peacekeeping organization. He will follow South Korea’s Ban Ki-moon, who has held the secretary-general post since 2006.

After the announcement that Mr. Guterres would succeed him, Mr. Ban hailed his soon-to-be successor as a “wonderful choice to steer this organization.”

For those watching, the news came as a rare glimmer of unity and hope during a particularly devastating year—with Europe deeply entrenched in a refugee crisis, nations in the Middle East continuing to splinter under political instability and extremist activity, and a divisive election cycle in the United States.

Although the UN’s top position is often ignored and its powers vaguely defined, Mr. Guterres wields great political influence. He, like many of his predecessors, will take on the heavy burden of attempting to resolve the world’s greatest troubles.

United States President Franklin Roosevelt, who championed the idea of forming the United Nations, conceived the organization’s top office as a “world moderator.” Now, over 70 years since the appointment of the UN’s first secretary-general, the role has amassed a wealth of duties.

The secretary-general is officially the head of the UN’s executive arm, the Secretariat. This branch, which has a staff of close to 9,000 people from 170 different countries, handles UN operations including research, media relations, and translation.

As leader, he appoints heads of offices, recommends members of the General Assembly, and decides which nations become members of the Security Council. He is considered the de facto head of the UN, which requires him to chair meetings of the General Assembly, as well as all UN agencies (such as the World Health Organization), various arms of the organization (including UNICEF and UNHCR), and councils (such as the Security Council), which all fall within the organization’s massive bureaucratic system.

In addition to his executive roles, the secretary-general serves as the UN’s spokesperson. He is entrusted with making statements on behalf of the international community and keeps up a rigorous itinerary, traveling to as many member nations as possible to keep in touch with their needs. The secretary-general then informs the UN and the world of his findings by issuing yearly reports on the progress of the UN’s goals and by establishing future priorities.

All of these roles would seem menial were it not for the secretary-general’s main objective, which is to “speak and act for peace.”

To achieve this, the UN’s top administrator must fulfill seemingly opposite roles: that of world advocate as well as chief executive of operations. As a world advocate, he represents all member nations and works to fulfill their needs. As a CEO, he enforces the moral values of the organization. The latter carries “the risk, from time to time, of challenging or disagreeing with those same Member States,” according to the UN’s website.

The Council on Foreign Relations (CFR) reported that pulls between these roles fosters either “an independent political force” or a “public servant”—or some combination of the two.

As an “independent political force,” the secretary-general has the power to “bring to the attention of the Security Council any matter which in his opinion may threaten the maintenance of international peace and security,” as it states in the UN Charter. He can “rally world public opinion around issues that wouldn’t necessarily have been addressed otherwise,” former Director of the World Policy Institute Stephen Schlesinger stated.

At times, this calls for military involvement. For example, the first secretary-general, Trygve Lie, was instrumental in gathering support to defend South Korea after it was invaded by Communist China and North Korea in 1950. Despite opposition from the Soviet Union, which was a UN member at the time, Mr. Lie helped convince 21 member countries to contribute to the defense of South Korea—which started the Korean War.

As a “public servant,” the secretary-general must be acutely aware of member nations’ needs. He must relay them to the public, and “work, privately and publicly, to fulfill those needs,” the UN’s website stated.

Kurt Waldheim, the UN’s fourth secretary-general (1972-1981), took on this approach. While in office, he “oversaw effective and sometimes massive relief efforts in Bangladesh, Nicaragua, the Sudan-Sahel area of Africa, and Guatemala, as well as peacekeeping operations in Cyprus, the two Yemens, Angola, Guinea, and, especially, the Middle East” (Encyclopaedia Britannica). His accomplishments have been described as “ministerial” as he attended to the needs of the countries he served.

Balancing the “creative tension” between bureaucratic and executive roles of the office led the first incumbent to label it “the most impossible job on this Earth.”

Exactly how each secretary-general operates is left up to the individual. The UN stated: “Each Secretary-General…defines his role within the context of his particular time in office.” In other words, as one former CFR Senior Fellow member put it, “A secretary-general is like a Supreme Court justice—you never know what you’re going to get.”

How might Secretary-General-elect Guterres define his tenure during such a pivotal time in human history? A look at his own history helps build a case.

A fervent Catholic born in Lisbon, Portugal, in 1949, Antonio Guterres entered the political world soon after completing engineering school. In 1974, he joined protests that helped dismantle the five-decade dictatorship the nation had endured, and he subsequently led the newly founded Socialist Party.

His work in the political party was characterized by seeking social justice and equality. The New York Times reported: “Mr. Guterres extols the gender quotas his party adopted in the early 1990s to promote women in the party. He does this to underscore what he calls his commitment to women’s rights, and he has promised gender parity in senior United Nations appointments.”

“As prime minister,” the media outlet continued, “he earned a reputation as ‘a skilled negotiator,’ according to a former minister in his government, Joao Cravinho, who credited him for reaching agreements with the right and left at a time when his own party did not have a parliamentary majority.

“One of his signature measures was to decriminalize drug use, in response to a surge in heroin addiction in Portugal. Less successful was his party’s effort to loosen curbs on abortion. A majority of the Socialist Party favored the move, though Mr. Guterres said that, as a Catholic, he opposed it. The law was abandoned after an unsuccessful referendum.”

Once he had accrued a powerful resume resolving social issues, the United Nations took note. BBC detailed the Portuguese prime minister’s next step: “Then Mr Guterres, fluent in Portuguese, English, Spanish and French, turned his attention to the world of international diplomacy, becoming the UN’s high commissioner for refugees in 2005.

“Under his guidance, the numbers working in the UNHCR’s Geneva head office were slashed, while its capacity to respond to international crises by deploying more staff closer to hotspots was improved.

“However, it was his tireless attempts to get the world’s richest countries to do more for those fleeing conflict and disaster around the world that people remember.

“‘We can’t deter people fleeing for their lives,’ he wrote in Time magazine last year. ‘They will come. The choice we have is how well we manage their arrival, and how humanely.’

“Prior to his nomination, he said that his work at the UNHCR had been excellent preparation for a secretary-general.”

“‘I think we are living in a world where we see a multiplication of new conflicts, and you see an enormous difficulty in solving the conflicts,’ he said.”

Mr. Guterres is particularly lauded for his accomplishments as a human rights commissioner. In 2015, when Kenya called for the shutdown of a Somali refugee camp because of the threat of terror attacks coming from it, Mr. Guterres flew from Geneva to intervene. He drew up a deal that kept the camp open and helped rally international aid for both Somalia and Kenya. “He was managing a very politicized situation with a lot of raw nerves,” refugees expert Bill Frelick of Human Rights Watch stated.

Mr. Ban also highlighted this strength. After Mr. Guterres’s appointment, he called him “perhaps best known where it counts most: on the front lines of armed conflict and humanitarian suffering.”

On January 1, 2017, Mr. Guterres will take on the duty of “securing international peace” among 193 member nations. He will also be entrusted with the operations of the mammoth UN bureaucracy itself, which have come under scrutiny. Meanwhile, he must juggle the many international crises already in progress.

According to The New York Times, “His first major diplomatic test will be to rally Russia and [the new president of] the United States to address the carnage in Syria.”

During a late 2015 briefing to the Security Council, Mr. Guterres, acting as the high commissioner for refugees, shared his desire to establish a program “for resettlement and other forms of admission to European countries and further afield.”

As commissioner, Mr. Guterres spent 10 years visiting war zones and refugee camps. In a statement to the General Assembly after his appointment as secretary-general, he admitted that his experiences often left him questioning: “What has happened to the dignity and worth of the human person?

“What has made us immune to the plight of those most socially and economically underprivileged?”

Yet he has also stated his awareness of the connection between the humanitarian crisis in Syria and its “enormous impact on regional stability and global peace and security.”

In addition to the crisis in Syria, The New York Times article continued, “He will also face a range of thorny conflicts elsewhere, from South Sudan to Yemen, and nuclear brinkmanship in North Korea.”

Many of these issues will be inherited from the incumbent’s tenure. Mr. Guterres has promised to seek the advice of Ban Ki-moon, who has spent the majority of his time in office addressing climate change policy, excessive food and energy prices in developing countries, Iran’s and North Korea’s nuclear threats, and the UN’s role in Sudan’s Darfur conflict.

In the same speech to the General Assembly, Mr. Guterres thanked Mr. Ban for his “international public service” and work toward resolving these issues. Mr. Guterres then affirmed that his mission was the same, stating that “having been chosen by all Member States, I must be at the service of them all equally and with no agenda but the one enshrined in the UN Charter.”

At the same time, he acknowledged the reality of the office he was accepting.

He summarized that the core of his work will be to restore “human dignity.” How he manages to carry this out—as a bureaucratic secretary or an influential political force, or both—has yet to be seen.