This website requires the use of Javascript to function correctly. Performance and usage will suffer if it remains disabled.
How to Enable Javascript
America’s Future – Cutting Through the Uncertainty

Cutting Through the Uncertainty

The result of Election Day in the United States has left many citizens doubting the future of the nation. 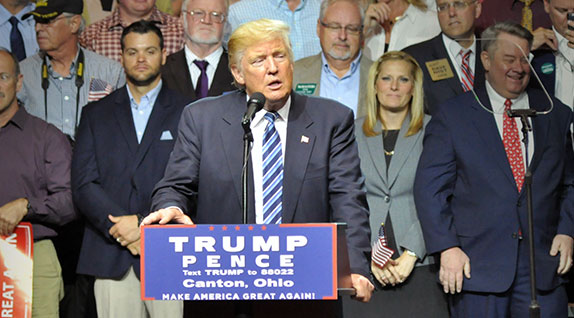 Stacey L. Palm/The Real Truth
On the trail: Presidential candidate Donald Trump speaks to his supporters at a rally in Canton, Ohio (Sept. 14, 2016).

Waiting in a long line outside a Donald Trump rally in Canton, Ohio, in September, a German-born woman told The Real Truth, “I’m a little bit embarrassed.”

These words were in response to a question about the state of the nation today. Having spent over 45 years in the United States after obtaining citizenship in 1972, she was ashamed by the hatred she saw between Americans.

The woman also shared her views of the nation’s issues with illegal immigration: “You should come here legally, not illegally.” She eagerly described her process of obtaining citizenship, which included learning U.S. history as well as to read and write English. Once the process was completed, the judge told her she could “do everything except go run for president.”

“Would you if you could?” she was asked.

“No,” she stated emphatically, her eyebrows raised. She looked up again, and burst into laughter. “I’m too old for that.”

It was a moment of levity during a tumultuous run-up to the election. Yet she—as with many others attending the rally—shared her hopes for change under a Trump presidency.

Hours later, Mr. Trump appeared before thousands of his supporters. During his address, he delivered promises of economic growth to cash-strapped residents of the Canton area. He also outlined his vision for policies on immigration, taxes, the federal deficit, political reform, and trade.

“So the people of the United States are truly”—he summarized—“ready for change.” Thunderous cheers confirmed—a President Trump would be their champion.

Fast-forward to the early hours of November 9. News broke that Mr. Trump had acquired the 270 electoral college votes needed to win over Secretary of State Hillary Clinton.

In New York City, the president-to-be addressed his supporters and the nation: “Working together, we will begin the urgent task of rebuilding our nation and renewing the American dream.” Meanwhile, protesters filled the streets of Washington, D.C., and trash fires burned in Oakland, California. During the following days, high schoolers skipped class to protest in Los Angeles, and anti-Trump slogans saturated Twitter. Disgruntled voters across the nation chimed in with a common phrase: “Not my president.”

According to a final pre-election poll by The New York Times and CBS News, more than 8 in 10 voters said the campaign had left them repulsed rather than excited. The same number felt that they had no faith in either of the presidential candidates, and that both are unlikely to bring the country together after a bitter election season.

This will be a challenge for the president-elect, who faces a citizenry disinterested in politics, distrustful of the media, and fearing the future. Even among his supporters, there are questions of whether the new president will fulfill his campaign promises.

CBS News journalist Bob Schieffer, who has covered every election since 1964, offered a historical perspective: “I have seen a few [elections], but I have run out of ways to say I have never seen one like this.”

He further stated: “The country seems at a turning point, but the divide over where to turn seems wider than ever. Perhaps we can at least agree on one thing—the first task of whoever is elected must be to repair the damage that’s been done by this campaign to the good name of our country.”

News headlines reflect severe reservations about the next four years. Under the Business & Finance section of The Wall Street Journal, an article titled “Home Loans Enter Uncertain Era” began, “The remaking of U.S. politics also is likely to upend the nation’s mortgage market.”

In another article, the paper reflected a “cautious optimism” concerning the economy: “The presidency of Donald Trump is poised to usher in a new era for the U.S. economy that forecasters say could boost economic growth, bring higher interest rates and inflation, and a new set of potential risks including international trade wars.”

The international community is also unsettled. The Wall Street Journal further reported: “Obama faces the task of reassuring allies about U.S. foreign policy as he prepares for his final world tour as president.”

One of the European Union’s top officials—President of the European Council Donald Tusk—congratulated Mr. Trump on his victory, but later called his election a “moment of uncertainty over the future of our transatlantic relations” (CNN).

French President Francois Hollande also defined the new era as one of “uncertainty,” and urged “vigilance because of statements made by Donald Trump” (Business Insider).

Nations in the volatile Asia-Pacific region hope that Mr. Trump’s “isolationist campaign rhetoric will not be implemented as policy by the incoming administration,” Yoichi Funabashi, chairman of a Tokyo-based think-tank, wrote for The Straits Times. “The region is rife with major geopolitical hot spots—China’s rise, maritime disputes in the East and South China Seas, instability on the Korean peninsula and a recent trend of tensions between South-east Asia’s strongmen leaders and Washington. Were America to withdraw, it would destabilise the region and cause a split between Asia and the Pacific.”

On top of this, concerns are mounting among climate change proponents. Many wonder whether the new president and a Republican-majority Congress will address growing environmental problems. An article in the Chinese newspaper Global Times summed this up: “Prospects of US Greenhouse Gas Emission Reduction Uncertain under Trump Administration.” French Prime Minister Jean-Marc Ayrault worried, “What will become of the Paris agreement on the climate…?” (The New York Times).

Doubt is also found among individual Americans. Those from both ends of the political spectrum have expressed concerns. Their comments on a KQED Learning website discussion board are revealing.

A Democrat voter stated: “I think this could impact our country negatively or positively. You never know, Trump could surprise us considering he surprised us by winning the election. I think the fate of our country is really up in the air at this moment.”

A voter who favored Trump wrote that “it is disconcerting that many people ferociously disliked both candidates, and only voted for one candidate because they disliked the other one more.”

Another commenter shared what could be a summary statement on behalf of all citizens: “…a very large portion of America is…scared for the future. I was never a big Trump supporter before the outcome of the election nor was I really against him. There is much uncertainty to what Trump will do during his presidency.”

As wary newspaper reporters, concerned politicians, and sincerely worried civilians express doubts, it can seem impossible to know what’s ahead.

How can you cut through the uncertainty?

First, follow the advice of the apostle Peter, who lived under the Roman Empire in the first century AD.

He wrote: “Submit yourselves to every ordinance of man for the Lord’s sake: whether it be to the king, as supreme; or unto governors, as unto them that are sent by him for the punishment of evildoers, and for the praise of them that do well. For so is the will of God…” (I Pet. 2:13-15). Verse 17 of the same chapter summarizes: “Honor all men…Fear God. Honor the king.”

Realize that around the time Peter made these statements, the leader of Rome was Nero—an emperor with a brutal legacy of killing Christians.

Peter told those in the Church to honor Nero, so long as it did not contradict God’s Law. These conditions are a far cry from the unparalleled personal freedoms Americans experience today.

While Peter’s instruction may seem counterintuitive, it is necessary to help establish order. If this is true for “the king,” how much more those holding lower seats of power—a president, governor or congressman?

Honoring the king does not mean condoning everything the government does. Rather, it is a way to show respect for those in authority—something God clearly desires.

Notice that the instruction to give deference to those in authority is paired with another command: “Fear God.” Deuteronomy 6:2 ties fearing God to obedience: “That you might fear the Lord your God, to keep all His statutes and His commandments, which I command you…”

Ecclesiastes 12:13 confirms this: “Let us hear the conclusion of the whole matter: Fear God, and keep His commandments: for this is the whole duty of man.”

Obeying God leads to promised blessings, one of which will allow you to cut through the uncertainty of America’s future.

God calls those obedient to Him servants. Servants receive a reward for their work. Employers offer their employees wages, while housemaids are often provided food, housing and other benefits by those who hire them.

Yet God promises a reward that no man can provide to those who serve Him: an understanding of the future. Notice Amos 3:7: “Surely the Lord God will do nothing, but He reveals His secret unto His servants…” Also read the beginning of Revelation: “The Revelation of Jesus Christ, which God gave unto Him, to show unto His servants things which must shortly come to pass…” (1:1).

The Bible declares that God will do nothing unless He first reveals it to His servants. This means He must have a clear way to reveal what future years will bring.

He does this through Bible prophecy.

World leaders have long felt that God has been working out a purpose on Earth. UK Prime Minister Winston Churchill stated during an address to Congress: “…some great purpose and design is being worked out here below of which we have the honor to be the faithful servants.”

Churchill, however, did not know what exactly that purpose was. He stated, “It is not given to us to peer into the mysteries of the future.”

How does this common idea that we cannot know harmonize with what you just read in Amos and Revelation? The answer: They do not!

God wants everyone to know what future years will bring—and His ultimate purpose for mankind. This is even true for the greatest nations of all time, including America.

Most Bible readers skip over the prophetic books of God’s Word. Without guidance, the likes of Isaiah, Jeremiah and Revelation are difficult to understand. This is not helped given the cacophony of personal interpretations of these texts.

Yet God outlines basic principles on how to understand His Word. These tools—and how to apply them to the future of the U.S.—are all explained in America and Britain in Prophecy.

The introduction to the book states: “When related Bible passages are placed together in clear and concise form—the Bible is a jigsaw puzzle, and it must be permitted to interpret itself—the prophecies about America and Britain (and certain other Western countries) are not difficult to understand. In fact, you will wonder why so few have been able to comprehend them.

“God has left a PLAIN MESSAGE in His Word—a clear path—for those willing to read and understand, and willing to accept blunt warnings, impossible to misunderstand. If this is you, it is necessary to read the whole book, through the final chapter.

“May God help you comprehend all you are about to learn!”

Read the rest of America and Britain in Prophecy. You need not remain hopeless, frustrated or uncertain about all that is to come!