This website requires the use of Javascript to function correctly. Performance and usage will suffer if it remains disabled.
How to Enable Javascript
Why the Diabetes Epidemic!

Why the Diabetes Epidemic!

Each year, the president of the United States delivers an address to Congress that assesses the state of the nation. The speech discusses conditions across the country as well as outlines his legislative agenda. It is televised live so that everyone nationwide can hear what he has to say.

If a similar address was given to discuss the health and wellness of people in the U.S., however, the news would not be good.

One of the most alarming statistics that would be discussed would be that almost 30 million American adults—almost 10 percent of the nation—suffer from the life-threatening disease of diabetes.

More alarming is that over 95 percent of these suffer from a “self-inflicted” form known as Type 2, or adult onset diabetes.

To better appreciate this epidemic, one must first understand the hormone insulin. According to EndocrineWeb: “Insulin is a hormone made by the pancreas that allows your body to use sugar (glucose) from carbohydrates in the food that you eat for energy or to store glucose for future use. Insulin helps [keep] your blood sugar level from getting too high (hyperglycemia) or too low (hypoglycemia). 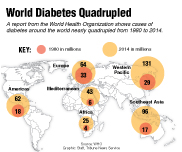 “The cells in your body need sugar for energy. However, sugar cannot go into most of your cells directly. After you eat food and your blood sugar level rises, cells in your pancreas (known as beta cells) are signaled to release insulin into your bloodstream. Insulin then attaches to and signals cells to absorb sugar from the bloodstream. Insulin is often described as a ‘key,’ which unlocks the cell to allow sugar to enter the cell and be used for energy.”

Insulin production is involved in the two types of diabetes, yet there is a difference between them.

Type 1: Also known as insulin-dependent diabetes, this condition is almost always hereditary and afflicts most before the age of 20. Even those with the best habits and health are not safe from this genetic condition.

Almost all of us have seen or known someone who had to take daily shots of insulin or, in more recent years, has worn an insulin pump to periodically administer it. This is necessary because Type 1 diabetics do not produce sufficient amounts of insulin (or potentially any at all) in the pancreas.

Type 2: Again, this is known adult onset diabetes. Those who have it actually continue to produce insulin. In many cases, a person’s pancreas may even produce too much. Yet the body is unable to recognize the insulin and use it properly.

Why are both forms of diabetes so problematic? Simple. When your body either fails to produce or recognize insulin, sugar cannot get into your cells and instead builds up in your blood.

This is dangerous for two reasons.

First, since sugar cannot get into the cells, the cells cannot use the sugar to produce energy.

Second, excessive blood sugar damages and eventually destroys blood vessels, which can result in lower leg amputations, blindness and kidney failure, the latter forcing a person onto dialysis for the remainder of his life.

To understand the real epidemic, revisit the fact that 95 percent of diabetics have Type 2 diabetes—which is a self-inflicted kind!

There are multiple contributing factors to developing this disease such as inactivity, overconsumption of food, and obesity. But it is almost universally accepted that the overconsumption of sugar, specifically, is one of the primary causes.

Yet sugar is in healthy foods such as honey and fruit. So, it cannot be all bad, right? Yes and no.

Consider the following from Everyday Health: “The sugars in food are known as simple carbohydrates and are a natural component of many fresh foods, such as the lactose in milk and the fructose in fruits. A healthy, well-balanced diet will always have these sugars in it.

“However, the problem with sugar is the sheer amount of it that’s in the typical American diet. Added sugars—the sucrose in table sugar as well as the sugars in foods such as sodas, cereals, packaged foods, and snacks—when consumed in excess, cause weight gain, heart disease, mood swings, and more.

“Research has found that a high-sugar diet certainly increases diabetes risk—adding just one serving of a sweetened beverage each day to your diet ups risk by 15 percent, a study at the Harvard School of Public Health found…”

So just how much sugar and foods with sugar are Americans consuming? According to the United States Department of Agriculture, the average American consumes 130 pounds of refined sugars per year. This comes out to 160 grams—about a third of a pound of sugar—per day.

While it may seem as though there is no way a person could consume that much, keep in mind that this is an average! This means that there are some people who only consume 20-30 pounds of sugar and some who consume 300 or more pounds of sugar per year—almost a pound per day!

With such an epidemic level of sugar consumption, it seems the best solution would be to say, “Stop eating sugar.” This would certainly be a huge step in the right direction, especially considering that less than 100 years ago, the average intake of sugar was only about four pounds per year and levels of Type 2 diabetes were almost non-existent.

But a slightly more in-depth explanation may provide a better understanding of what you can do and how different our diet is today compared to generations past.

There are two factors in which the diet of the past 6,000 years differs from that of today.

Historically, people did eat large amounts of carbohydrates and some sugar, but these were in the form of complex (slow-burning) carbohydrates such as sweet potatoes and whole grains including oatmeal, millet and flax.

Second, life in general was an exercise in stamina. Most people worked in agriculture or had jobs that required large amounts of physical labor. The carbohydrates people consumed not only entered their bloodstreams more slowly, but they burned them quickly due to high levels of activity.

Since this was the case, people generally never experienced a blood sugar spike, which would have resulted in the need for large amounts of insulin.

With that in mind, the solution is simple: If you want to avoid falling prey to Type 2 diabetes, stay active. Eat simple foods from the food pyramid—lean meats, whole grains, lots of vegetables, and a few fruits in the absence of soda, sugary treats, and snack foods.

Just making these small changes goes a long way in preventing this self-inflicted and preventable disease!