This website requires the use of Javascript to function correctly. Performance and usage will suffer if it remains disabled.
How to Enable Javascript
Libya: Five Years After Gadhafi 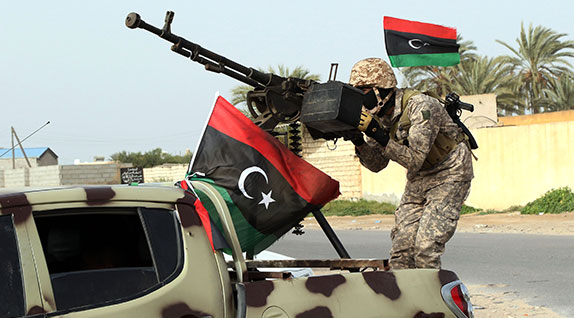 Martin Kobler, a Libya special representative for the United Nations secretary-general, stated that Libyans “lack medicines, vaccinations and suffer from poor hospitalization services. Almost 300,000 children are out of schools and almost 350,000 Libyans are displaced within the country.”

He also said that 2.4 million people in Libya, including foreign migrants stranded in the territory, are in need of humanitarian assistance.

“Prices of flour and bread quintupled” throughout the nation and funding has become “insufficient for sustaining adequate public provision for health, education, electricity, water and sanitation services,” the organization stated. 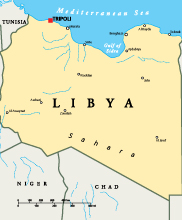 Although ISIS has been defeated in some cities by national security forces, U.S. officials estimate as many as 6,000 ISIS militants remain in the country. Most of these forces exist in key areas and “will fight until the last bullet,” Colonel Ismail Shukri, head of intelligence for the Tripoli government in Misrata, told CNN.

Before Gadhafi was violently removed from power in 2011, Libya’s varying religious and cultural factions were united under his regime, which came into control in 1969 through a coup. In addition to the former leader’s military power, economic prosperity brought on by the discovery of oil reserves during his tenure helped unify the nation under a strong central government.

“The National Transitional Council…a rebel leadership council which had fought to oust the Gaddafi government, declared Libya ‘liberated’ in October 2011 and took over the running of the country,” BBC stated.

“However, it struggled to impose order on the many armed militia that had become active in the months leading up to the ouster of Gaddafi.”

These armed groups refused to cooperate with the revolutionary government in the following years.

In late 2015, the United Nations put pressure on the eastern and western governments to unite under the newly formed Government of National Accord (GNA).

Western powers had vouched for the GNA to “tackle Libya’s security vacuum—including the presence of Islamic State—revive oil production, and stem the flow of migrants crossing the Mediterranean to Europe,” Reuters continued.

While both the eastern and western governments agreed to join the GNA, Reuters stated that some “power-brokers in the east say [the GNA] is trying to undermine the military” and refuse to attend unification votes.

Although both governments have, in theory, joined the GNA, they continue to act as separate governments—each with its own parliament, territory and armies.

As a result, “Trust in the nation’s weak government institutions has fallen to an all-time low as political elites, unable to agree on even a governmental structure, deploy armed militias to control territory and economic assets,” the United States Institute of Peace reported.

The declining stability of the nation could threaten global security. David Tafuri, an international lawyer, wrote in an opinion-piece for The New York Times: “Libya is of crucial strategic importance to the United States. Geographically, it is a gateway to and from Africa…Libya can either be a helpful, stable ally to the United States or a failed state, awash with displaced persons and a base of operations for terrorists.”

He further stated: “A majority of Libyans still yearn for stability and democracy…Yet Libya needs outside help to institute the reforms necessary to make a new government a success. Most important, the United States must coordinate assistance from the international community and ensure that regional players in the Middle East are not supporting militias and other forces that destabilize the country.”

On the contrary, defense analyst Ludovico Carlino told The Guardian that more interventions “will probably cause more anarchy and chaos.”

As political gridlock continues within Libya and global powers grapple for solutions, conditions for Libyans deteriorate.

Several of those involved in toppling Gadhafi’s regime during the Arab Spring have even become disillusioned with the turn out.

The Guardian described one revolutionary’s experience: “Five years ago he picked up a gun and joined Libya’s rebels to depose Muammar Gaddafi in a blaze of patriotic vigour. Half a decade later the Tripoli medical student will mark [the] anniversary of the Arab spring revolution treating militia fighters wounded in battles with Islamic State.

“Libya marks the fifth anniversary of its revolution with the country torn by civil war and Isis expanding quickly into the chaos. ‘Back then it was simple, we fought for freedom,’ says the medical student, who asked to remain anonymous. ‘But a lot of time, you wonder was it worth it?’”