This website requires the use of Javascript to function correctly. Performance and usage will suffer if it remains disabled.
How to Enable Javascript
World News Report: October 2014 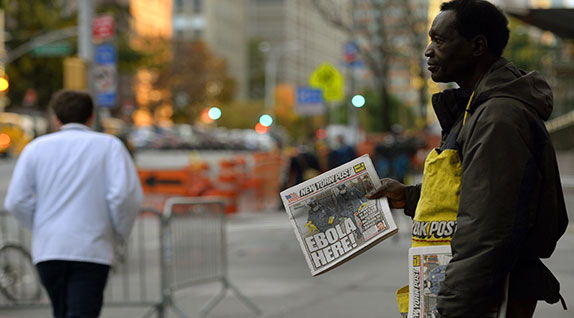 Timothy A. Clary/AFP/Getty Images
Global threat: A newspaper vendor holds up a copy of the New York Post in front of the entrance to Bellevue Hospital in New York City the morning after it was confirmed that Craig Spencer, a member of Doctors Without Borders who recently returned to New York from West Africa, tested positive for Ebola (Oct. 24, 2014).

The Ebola outbreak is now officially out of control. Its spread is throwing entire nations of western Africa into chaos, meltdown and even complete collapse. Now in Sierra Leone, five people are being infected every hour! Recently, the first case was discovered in the United States, causing many to panic in fear over the implications. National Geographic magazine reported that just in West Africa well over 1 MILLION PEOPLE could be infected within less than four months by the disease!

“Ebola could spread to more than a million people over the next four months if immediate, aggressive, and sustained action isn’t taken by the world community, U.S. government officials predicted today. Between 550,000 and 1.4 million people in West Africa would fall ill with Ebola by late January if the infection rate stays the same as it was in August, according to a projection model released by the U.S. Centers for Disease Control and Prevention (CDC). The virus, which has been raging out of control since March, has infected at least 5,843 people and has killed 2,803, according to the World Health Organization. The model was released to demonstrate the price of inaction to the world, CDC Director Tom Frieden said in a news conference. ‘Every day counts and will make a difference in our ability to control this,’ he said.”

The article went on to describe the extreme difficulty of stopping Ebola’s spread. Carefully follow the math in this astonishing statement (italics added): “According to the model, isolating patients will turn the tide of the epidemic. The outbreak will begin to decrease when about 70 percent of patients are isolated and in treatment, it estimates. Every month that the 70 percent threshold isn’t reached will lead to an approximate tripling in the number of daily cases, the model projects. ‘Each day we’re not effectively isolating people, not only are people dying and potentially infecting others, but the job of turning it around, of stopping the outbreak gets much more difficult,’ Frieden said.”

Sadly, Western nations have so far not come close to providing the necessary aid and assistance to halt Ebola’s impact. This is largely due to the many other problems continually breaking out around the world, such as the ongoing series of crises in the Middle East. World leaders face new problems on top of old ones, and the job of prioritizing which ones to allocate resources to is simply impossible. The United Nations is warning that Ebola could become airborne, which would cause a SPECTACULAR spike in infections!

The whole world, including thought-to-be “Christian” nations, seems caught off guard by each new disease that appears. But these nations should not be even a little surprised if they just believed Christ’s one single word of warning in Matthew 24, Mark 13 and Luke 21—that “pestilences” would come at the end. Why do almost none believe Christ’s warning about the Pale Horse of Revelation 6 that so many talk about is real? But so few believe anything of prophecy means what it says—what God said so plainly.

In the United States, the Midterm Elections are just over the horizon. With these elections come the possibility—and increasing likelihood—that Republicans will win a majority in the Senate. They must win in states they currently hold and take six more seats to do this. The Washington Post summarized the crucial nature of the elections: “The House is in GOP hands, and no one thinks the November midterm elections will change that. Republicans could lose governorships in presidential battleground states, and that is hardly insignificant. But House and gubernatorial contests pale in comparison to the question of who will control the Senate next January. If Republicans win back the chamber, it could have a profound effect on President Obama’s final years in office and on the future of the Republican Party.”

If Republicans control both the Senate and the House of Representatives, we might expect more gridlock as the conservative party does everything in its power to stop the President, and the President does the same to thwart conservative initiatives. The animosity on both sides has been at unprecedented levels now for years. For example, people are using a new smartphone app allowing them to boycott consumer goods based on whether a particular company’s leadership donated to Republicans or Democrats. Shocking! More like absolutely stunning is the divided modern world!