This website requires the use of Javascript to function correctly. Performance and usage will suffer if it remains disabled.
How to Enable Javascript
World News Report: July 2014 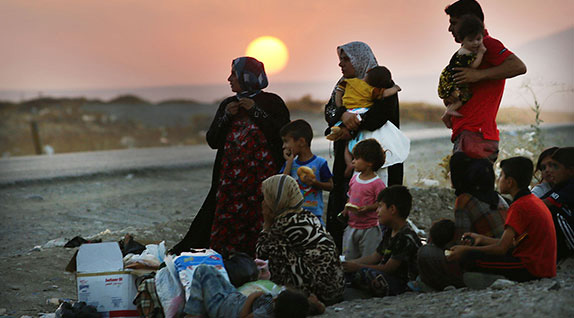 Spencer Platt/Getty Images
Homeless: An Iraqi family prepares to sleep on the ground outside a displacement camp in the Kurdish region of Khazair, Iraq (July 3, 2014). The family, who fled fighting near the city of Mosul, joins an estimated 1,500 internally displaced persons at the camp.

This world is in full-blown CRISIS! To anyone watching world news, there would seem to be no hope. Small, medium and large “fires” are breaking out in nearly every corner. And most continue to grow with no man or nation able to put them out.

On the U.S./Mexico border, a humanitarian crisis is quickly growing. Tens of thousands of children are flooding America from Central America to escape violence in their home countries. The Los Angeles Times reported this about the staggering statistics:

“From the start of this federal fiscal year on Oct. 1 through May, 34,611 were from Central America and 11,577 from Mexico.” These numbers are expected to reach 90,000 by year’s end—up from only 6,000 people in 2011, just three years ago. Next year the number is projected to be around 140,000, but many think it will be much higher. It is worth the time to think about this because of all that is at stake in this grave national problem.

The unprecedented number of young people is overwhelming the holding centers. These facilities are running out of room and officials are scrambling to figure out where to put them. The floodgates opened partially as a result of the current administration’s 2012 decision to not deport children who cross the border illegally. As soon as they enter the United States, the policy is to process them and then give them an opportunity to join any family they have in America.

The Los Angeles Times summarized the situation this way: “Many are fleeing violence at home, or reacting to false rumors that children and families will be given permission to stay. Although no program grants residency to such migrants, in a strange way, the rumor has become somewhat true. After 72 hours, the Department of Homeland Security must transfer detained children to the Office of Refugee Resettlement, which is required to ‘act in the best interest of the child.’ That often means reuniting the child with a parent or relative living in the U.S. With the massive backlog in immigration courts, migrants can spend years in the U.S. before their cases are heard.”

The administration is now attempting to deport some of the children and is asking for $2 billion in emergency funding: “President Obama’s surprise request that Congress give him authority to quickly deport thousands of Central American children illegally crossing the border is likely to renew the on-again, off-again immigration reform debate that many Republicans had hoped to avoid.

“The administration is asking Congress to approve $2 billion in emergency funding for beefed-up border security and assistance, as the children…slip across the Southwest border. Amid a growing humanitarian crisis, many of the children are being sent as far away as California and Oklahoma for processing and shelter” (ibid.).

Yet just last week hundreds of protesters in one California town confronted a convoy of buses arriving to deliver people there and were able to dissuade the drivers from letting anyone off the bus. They drove on, hoping to find another town to take several full busloads. Directly connected to this is the latest development: the American President said he now plans to use all of his executive powers to push through immigration reform essentially by himself. This of course is triggering a slow-motion constitutional crisis in the United States where the third most powerful man in the country, Speaker of the House John Boehner, is now suing the President for “constitutional overreach.” It remains to be seen if the courts will take this case and what will happen if they do. Anger is boiling over, and one wonders if America’s streets will someday resemble Ukraine or Israel and the West Bank.

Then there is Iraq, and the spread of ISIS, the Islamic State in Iraq and Syria. The group is led by Abu Bakr al-Baghdadi, and is the wealthiest terrorist organization ever after it robbed over $400 million from banks in Mosul, Iraq’s second largest city. (Also think of the millions of dollars in military equipment given from the United States to Iraq that has now fallen into terrorists’ hands.) ISIS already has a significant foothold in Syria but earlier in June found an entrance point into Iraq. The country is now being overrun faster than anyone anticipated. In fact, the group just declared that “the Islamic Caliphate” is back! The group is now openly calling for Islamic “judges, doctors, engineers, and people with military and administrative expertise” to join them (BBC). This bears watching closely. A video Israel and Hamas posted by ISIS showed a member of the group standing at a captured Iraqi border declaring, “‘This is not the first border we will break. God will break all barriers…Iraq, Jordan, Lebanon...all of them until we reach Jerusalem. This is the first of many barriers we will break.’”

Next think of the European Union. How long will they stand idly by as the Caliphate emerges? How much more integration will be required before Europe realizes it must take the lead on the world stage as America abrogates its role as lone superpower? I did not believe that the pace of America’s footprint shrinking around the world could possibly speed up, but this constant pullback is now exploding in “progress.” And each month that passes sees another corresponding step toward the strengthening of Europe. For instance, Italy has declared that when it takes over the rotating six-month EU presidency, it will openly push for a “United States of Europe.”

Another recent article explained how the EU and Britain are “heading for a divorce.” Think of it this way: Britain is on the European Union “train,” with the destination being full integration. Uncomfortable in its “seat” because of where the conglomerate of nations is going, Britain is mulling an exit strategy. Only time will tell at which “station” Britain will get off—or whether they will be asked to leave, or even be thrown off the train. (To learn more about Britain’s future, read our thorough book America and Britain in Prophecy).

Finally, tensions are escalating between Israel and Hamas after terrorists kidnapped three Israeli teenagers. The bodies of the young men were found earlier this week, and Israeli Prime Minister Benjamin Netanyahu stated that Hamas is responsible and that “they will pay.” The headlines are right now filled with the escalating violence between the Israeli military and Hamas.

To learn the why behind these ever-worsening world conditions, read our booklet Are These the Last Days? It brings the plain answers—straight from your Bible—about what lies ahead.