This website requires the use of Javascript to function correctly. Performance and usage will suffer if it remains disabled.
How to Enable Javascript
World News Report: April 2012 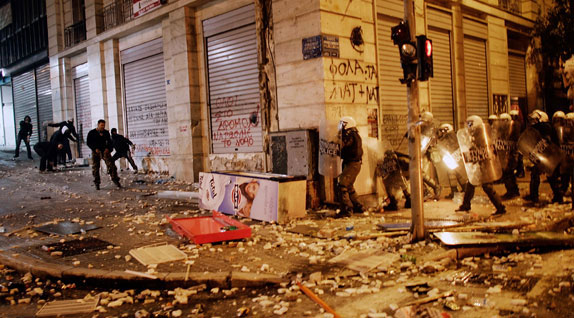 With each passing day, Bible prophecies continue to advance. I start with a more extensive report on Greece, some of which will be graphic. But first recognize that conditions in Greece are a microcosm of what is soon coming in many more places around the world. It also shows the environment in which the masses will desperately cry out for someone—ANYONE!—to stand up and solve all their problems. Of course, those who understand prophecy recognize that the Beast system described in Revelation will fill this power vacuum, and promise to return prosperity to a now almost completely broken economic system all across Europe.

The obvious—and recent!—historical pattern can be seen when considering post-World War I Germany in the 1920s under the Weimar Republic. Hyperinflation and extreme economic hardship, partly because Germany was trying to repay war debt, left the German population willing to follow almost any leader able to deliver the “good times” again. Hitler stepped in, and a big enough number of people welcomed him with open arms. Of course, the rest is history, including how over 50 million people were dead within 12 years as a direct result. Incidentally, to understand the scope of what desperate people reached out for, against today’s population this would be the equivalent of 150 million people dying as a result!

Back to Greece. The stunning conditions inside this small European nation have gone largely unreported in the American mainstream news media. But one journalist recently provided a shocking report of what is really going on there. After spending six hours in Athens, he reported that the entire city had an “apocalyptic” feel to it. Stray dogs roamed the street in packs—just imagine this in America—since people were forced to release them after being unable to afford them. The city smelled like urine and feces, with drug use occurring openly. The reporter also stated that he had never seen so much graffiti in his life, even when comparing it to places like the Bronx, New York. I have seen and worked in all parts of the Bronx and seen the photos, and he is correct. Video of the city also confirms this. Virtually every shop window, awning, city building, university campus and store was littered with anarchist, socialist and communist graffiti that would have to be sandblasted out of the stone it covers in uncounted buildings. One is reminded of large American inner cities.

Then there were the buildings destroyed by protesters. Many structures were completely gutted by fires, including an entire seven-story shopping mall. Chunks of marble were chipped off city buildings by youth who would use them as rocks to hurl at police. Even more incredibly, the universities served as sanctuaries for the protesters. After causing havoc in the streets, youth would flee to a university where police would only be allowed entrance to make an arrest with permission from the university dean. Astonishing! Most of the time, the dean would not allow police to enter. The result? The protesters escape punishment. Imagine dealing with violent crime in American universities only if you had the permission from administrators to arrest students.

Other European countries will follow what has happened for centuries beyond Europe. (Last night in Lexington, Kentucky, home of this year’s men’s national collegiate basketball champions, as regularly occurs after virtually any championship in America, the CELEBRATION led to violence and riots that included two shootings and 61 fires across the city. Understand that human nature is ALWAYS looking for a chance to demonstrate, party—and riot. Take time to read Exodus 23:2, which forbade all forms of mob action in ancient Israel.)

Again back to Greece. A Bloomberg article reported this: “Budget cuts of 23 percent since 2009 mean [university] buildings aren’t heated in the winter…Students say it’s hard to be hopeful with youth unemployment surpassing 50 percent and protesters seizing university buildings.

“‘People are pessimistic and sad,’ said Konstantinos Markou, a 19-year-old law student, speaking in a lobby at the University of Athens, where dogs fought nearby and students say drug dealers and users congregate. ‘The sadness is all around the air.’”

Much more could be said about the truly dire conditions in Greece, including how its medical system has broken down due to lack of finances. Diseases such as HIV and malaria are returning. But recognize that this is only the front edge of worsening conditions in a single country. As the Four Horsemen of Revelation 6 pick up speed, the above reports will become much more frequent, much more widespread.

Regarding extreme weather, a stunning 6,000-plus weather records were broken across the United States just from March 1 to March 22. During the same period, there were only 250 daily record lows. This confirms that the nation has been experiencing unseasonably very warm weather in recent weeks. For instance, according to weather.com, “Chicago, Detroit and Indianapolis are all currently seeing their warmest March on record…Records date back to the 1870s in all of these cities.” There was also a new very sobering report from the United Nations’ Intergovernmental Panel on Climate Change that forecasted much worse weather disasters in the coming years. “The greatest danger from extreme weather is in highly populated, poor regions of the world, the report warns, but no corner of the globe—from Mumbai to Miami—is immune. The document by a Nobel Prize-winning panel of climate scientists forecasts stronger tropical cyclones and more frequent heat waves, deluges and droughts” (The Associated Press).

Finally, in one of the most upsetting articles I have ever read about disease, the director general of the World Health Organization (WHO) recently came out and warned that bacteria were becoming so antibiotic resistant that it could mean “the end of modern medicine as we know it” (The Telegraph). She explained, “Things as common as strep throat or a child’s scratched knee could once again kill. Antimicrobial resistance is on the rise in Europe and elsewhere in the world. We are losing our first-line antimicrobials. Replacement treatments are more costly, more toxic, need much longer durations of treatment, and may require treatment in intensive care units. For patients infected with some drug-resistant pathogens, mortality has been shown to increase by around 50 percent. A post-antibiotic era means, in effect, an end to modern medicine as we know it” (ibid.). The warning came on the heels of a book just released by the WHO that described a global “crisis…building up over the decades, so that today many common and life-threatening infections are becoming difficult or even impossible to treat” (ibid.).

It becomes obvious that mankind has now reached a time where it is rapidly running out of options to hold back the big floodgates controlling disease. An analogy like this can be helpful in making the threat real. See a vast reservoir of disease behind an enormous dam that just “blows.” When understood, prophecy reveals that conditions—and statistics!—will grow much worse before finally being solved permanently by Christ and the resurrected saints. The dam is about to blow, and in fact in small ways is seen to already be cracking. “Water” under pressure is “shooting” through.