This website requires the use of Javascript to function correctly. Performance and usage will suffer if it remains disabled.
How to Enable Javascript
World News Report: March 2012 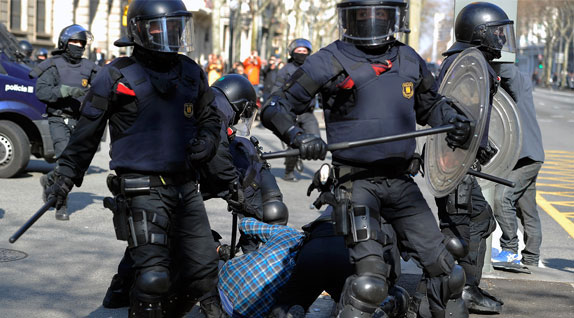 With all that is occurring around the world, it should be obvious that plain prophecies are being fulfilled in one news report after another every day of the week.

With Europe on fire—figuratively and more of the time literally!—economic conditions worsening—political infighting more vitriolic than ever—extreme weather reappearing (did it ever disappear?)—new diseases arising and famines appearing—increasing danger and tension in the Middle East—and growing lawlessness, corruption and moral collapse EVERYWHERE—the need for God’s kingdom becomes clearer to those who are obeying Christ’s command to pray for it.

One political commentator recently observed that it is as if the governments around the world—all of them—are “insane,” and “out of control!” It is important to understand why this is true. Man has spent 6,000 years proving he is completely incapable of ruling himself. Any who doubt this should just keep reading.

European leaders continue to squabble over how to solve the economic crisis. Another Greek bailout (130 billion euros, or $173 billion) was agreed upon. At the same time, riots continue to break out across European cities. Last week, tens of thousands of students all over Spain protested austerity cuts to education. They started fires and threw projectiles at police and buildings. The Genesis 6 condition of Noah’s day that Jesus foretold would come back before His Return—“the earth was filled with violence” (vs. 11)—is coming true.

In Britain, the Department of Environment, Food and Rural Affairs officially declared southeast England to be experiencing drought as a result of two very dry winters. The descriptions given are almost apocalyptic. Some of eastern England was already seeing drought conditions since summer 2011, and reports are that the nation’s Midlands could also soon be in a state of drought. The recent announcement came after the government agency met with wildlife organizations, water companies and farmers to talk about increasing water shortages. Environment Secretary Caroline Spelman stated, “Drought is already an issue this year with the South East, Anglia and other parts of the UK now officially in drought, and more areas are likely to be affected as we continue to experience a prolonged period of very low rainfall…It is not just the responsibility of Government, water companies and businesses to act against drought. We are asking for the help of everyone by urging them to use less water and to start now” (Telegraph).

Yet how much conserving will the average Briton do when one considers the next account? In previous drought years, since food was being imported, farmers were banned from watering their crops, while water was instead used to irrigate golf courses. The President of Britain’s National Farmers Union, Peter Kendall, said, “Bluntly you can still play golf on a brown golf course. What sort of society [puts] golf before affordable food?” (ibid.). This is truly stunning!

On top of this, since the region being afflicted by drought has been called the “breadbasket of Britain,” strong warnings are also coming out about increasing food prices. Dry conditions, coupled with a lack of water reservoirs for crops, will cause a dramatic spike in the cost of food. Mr. Kendall also stated, “As sure as night follows day if it doesn’t rain, food prices will go up. I can guarantee you that…If there is less water across bigger areas of northern Europe food will cost more…” (ibid.). Note the reference in the first quote to “affordable food.” There will be food, but it will be those with money who eat. What chaos could this engender from those without?

Yet all of this is only the tip of the iceberg. This entire Personal could easily be filled with accounts of how many different aspects of society are affected when just one disaster such as drought strikes.

Then there were the early season tornadoes in the United States that ravaged five states and left at least 39 dead so far. The tornado that hit Henryville, Indiana was an EF-4 (second worst on the scale), and had winds up to 175 mph. A number of entire small towns were completely destroyed—NOTHING left! The pictures all through American newspapers and television are simply horrific. This destruction has led many to ask, if this is how the season is starting, what could the coming months bring? Those who understand the truth about Bible prophecy are left to then ask, what could each of the coming years bring?

In the Middle East, the constant, almost 24/7 coverage of the Iranian nuclear program controversy continues. All eyes are on Israel to see what this tiny, surrounded country will do in the face of increasing threats. Some are reporting that Israel has in fact already made the decision to strike Iran. Israeli Prime Minister Benjamin Netanyahu just met with U.S. President Barack Obama in Washington to discuss the issue. America has been pushing Israel to delay any attacks on Iran. A recent Fox News article reported, “Senior Israeli officials say Israel would have to act by summer in order to be effective. U.S. officials, wary that an Israeli strike could drive up oil prices and entangle the U.S. in a new Mideast military confrontation during the presidential election season, want to give diplomacy and sanctions more time to work.” Watch this situation closely as events ratchet up in this region. (To understand the bigger picture framing this situation, read my free book America and Britain in Prophecy.)

Finally, in what was the largest methamphetamine bust ever, authorities seized 15 tons of the powerful drug at a ranch in Mexico. First, try to think of the number of pounds—30,000!!!—to get a more accurate picture in your mind of how much this really is. And it is but a single location—just one event, just one bust. The drugs were estimated to be worth $4 billion, and equaled 13 million doses. (To put this in further perspective, this is more than double the amount of ALL methamphetamine seized at the Mexican border in the whole year of 2011.) Although it is viewed as good news by most that the drugs were found, the fact that this large of a cache even existed brings its own message of terrible news. Experts report that this latest bust reveals that the drug cartels are producing more than ever, despite Mexico and America ramping up efforts to stop these criminal enterprises. A spokesman for the Drug Enforcement Administration stated, “The big thing it shows is the sheer capacity that these superlabs have in Mexico…When we see one lab with the capability to produce such a mass tonnage of meth, it begs a question: What else is out there?” (The New York Times).

The answer to what is out there? A desperately sick Western society (not just the United States) in desperate need of what may be the most addictive drug the world has ever seen!

Despite mankind’s best efforts to stop drug abuse, this ever-worsening problem comes down to character, and it will truly only be solved at Christ’s Return when there are simply no drugs available anywhere in the world.

While the state of the world is increasingly dismal, there is another story beyond today’s headlines. To learn more about the good news that lies just ahead, read my book Tomorrow’s Wonderful World – An Inside View!