This website requires the use of Javascript to function correctly. Performance and usage will suffer if it remains disabled.
How to Enable Javascript
David C. Pack Visits Israel and Jordan 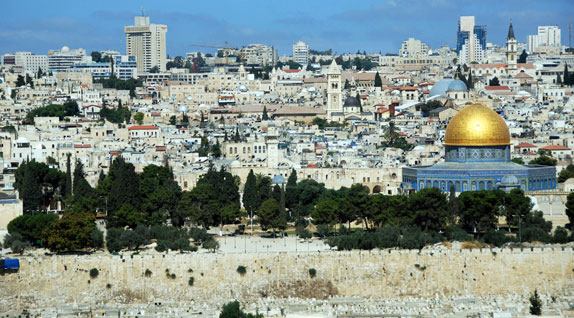 The Real Truth
City of diversity: A view of Jerusalem as seen from the Mount of Olives.

In July/August, David C. Pack, Editor-in-Chief of The Real Truth magazine, voice of The World to Come program and Pastor General of The Restored Church of God, traveled to Israel and Jordan, accompanied by Real Truth writers and a film crew.

The Real Truth
International trip: (1) Graves cover the Mount of Olives, where the Bible states Christ will return; (2) Mr. Pack films a World to Come broadcast in front of the Garden Tomb; (3) Caves line Petra; (4) View from the Mount of Beatitudes next to the Sea of Galilee where Christ preached the Sermon on the Mount; (5) A view of the tomb where Christ was likely placed after His crucifixion; (6) The treasury building in ancient Petra is the first thing visitors see after walking out of the narrow canyon; (7) A Bedouin boy displays necklaces he is selling; (8) The Dead Sea forms part of the Jordanian-Israeli border; (9) Mr. Pack meets with former Ambassador to Turkey Uri Bar-Ner; (10) A view of Israel from the top of Mount Carmel, where the Bible records the Old Testament prophet Elijah confronted the prophets of Baal.

During the 11-day trip, Mr. Pack and the delegation met with government officials, toured historical and biblical sites, filmed a number of “on location” World to Come broadcasts, and were given a deeper understanding of the challenges the region faces today.

Although Mr. Pack visited Israel for three weeks in 1988, much has changed since that time. This visit provided another extraordinary journey through the Mid-East nation. (The interested reader may wish to read the account of the 1988 trip, which can be found in Volume Two of The Authorized Biography of David C. Pack.)

The Real Truth
Varied landscapes: (1) A view of Syria from the Golan Heights in northern Israel; (2) A building stands in Jaffa, one of the oldest cities in the world, located on the outskirts of Tel Aviv; (3) A view from the Temple Mount; (4) A sign is posted on a barbed-wire fence warning of nearby landmines; (5) An Orthodox Jew walks on the outskirts of the Temple Mount; (6) A boat is stationed on the Red Sea off the coast of Jordan; (7) Two Israeli guards holding machine guns stand along the Jordan River at the thought-to-be spot of Christ’s baptism; (8) Cars drive by an older residential building in Tel Aviv; (9) Caesarea Maritima, an ancient harbor, is located on the Mediterranean Sea; (10) A new housing development is situated on a hillside in the town of Ma’ale Adumim; (11) A woman wearing a veil walks on the top of the Temple Mount in Jerusalem; (12) The Jordanian-Israeli border area near the Jordan River (where Christ is thought to have been baptized) was recently cleared of landmines so that tourists could pass through; (13) A machine-gun monument stands on the top of a mountain in honor of Israelis who fought in the country’s numerous wars; (14) The base of several pillars stand in the synagogue at Capernaum, a town Christ frequented in northern Israel; (15) Masada National Park is home to a palace fortress built by Herod the Great.

Senior leaders in The Restored Church of God had the opportunity to see an abundance of historic places, including some at which Jesus Christ was present during His earthly ministry. Sites visited included the Yad Vashem Holocaust Memorial, the ruins of Gomorrah, Masada National Park, the ancient port city of Jaffa, the Garden of Gethsemane, the Garden Tomb (where Jesus was buried and resurrected), Golgotha (where He was crucified), Megiddo, Carmel (where the prophet Elijah confronted the prophets of Baal), the Arab-controlled Temple Mount, the Western Wall, Capernaum (where Jesus grew up and attended synagogue), Caesarea Philippi (the site at which Christ said He would build His Church), Tel Aviv, the Valley of Hinnom (Gehenna), and the Valley of Elah, where David slew Goliath. The group also visited the Sea of Galilee, the Dead Sea, the Mediterranean Sea, the Jordan River, and the Red Sea (Gulf of Aqaba) at Eilat, which features a view into Jordan, Egypt and Saudi Arabia.

The tour ended with a visit to Jordan to see the ancient city of Petra, a UNESCO World Heritage Site featuring elaborate structures carved into red stone valley walls.

Many soon-to-be-fulfilled biblical prophecies will take place in Israel, and Mr. Pack took the opportunity to deliver seven “on location” World to Come segments at notable locations there. These broadcasts will be posted on rcg.org/worldtocome.

Received by Officials in Jerusalem

The Real Truth
Wide-ranging travels: (1) The archeological remains of dozens of civilizations leave their imprint on Tel Megiddo. While on the trip, Mr. Pack filmed a special World to Come presentation at the top of the famous hill; (2) A memorial at Yad Vashem contains a mosaic floor composed of six million tiles to represent the Jews who died in the Holocaust; (3) An ancient olive tree stands in the Garden of Gethsemane, where Jesus Christ went before He was arrested; (4) Men pray at the Western Wall, also called the Wailing Wall; (5) Women place pieces of paper that contain written prayers into the cracks of the Western Wall.

Another element of the trip was meeting with a number of Israeli national and municipal leaders who, when they learned that Mr. Pack would be in their country, expressed interest in meeting with him.

Earlier in the day, Mr. Pack spoke with Deputy Mayor of Jerusalem Naomi Tsur. She arranged for Mr. Pack to visit the City Council Chambers, where he was treated to a unique view of the Old City and Mount of Olives. The previous evening, Mr. Pack was hosted for dinner by Amb. Uri Bar-Ner, Israel’s former Ambassador to Turkey.

Mr. Pack also visited Ma’ale Adumim, a growing municipality seven kilometers (4.5 miles) east of Jerusalem, as the guest of the city’s mayor, Benny Kashriel. The city’s central location is geographically significant, linking the Jordan Valley and Judean Desert to the nation’s capital. Mayor Kashriel and Mr. Pack discussed many issues relating to the strategic security value of the city, and the mayor arranged a special tour for Mr. Pack with the City Spokesman Hizki Zisman as his guide.

The trip provided insight into many of the conflicts confronting the area now, and the issues the region will soon face.