This website requires the use of Javascript to function correctly. Performance and usage will suffer if it remains disabled.
How to Enable Javascript
Unrest Continues in the Arab World

Unrest Continues in the Arab World 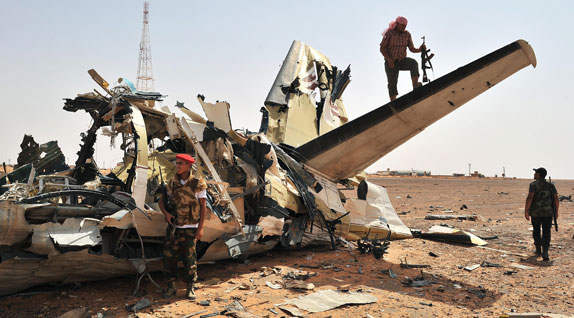 “A new Middle East is emerging…” Iranian President Mahmoud Ahmadinejad proudly declared on the anniversary of the 1979 Islamic Revolution in a Telegraph article. Albeit, he said, “without the Zionist regime and US interference…”

Almost two months prior to this speech, a Tunisian man set himself ablaze, sparking protests that forced the nation’s president to resign—a 28-day struggle that triggered the revolutionary fire still raging across the Arab world.

After the Tunisian regime’s defeat, it took just another 18 days to oust Egypt’s long-time president, Hosni Mubarak, who had ruled for 30 years.

This prompts the question: could Arab democracy be part of the “emerging new Middle East” Iran’s president and others talk about? If so, would it serve to harm or help the stability of the region?

The unrest that shook Tunisia and Egypt continues to spread. So far in 2011, anti-government protests have rocked the streets of Algeria, Yemen, Jordan, Lebanon, Saudi Arabia, Bahrain, Syria, and Iraq, among others.

The so-called “Arab Spring” has segued into an “Arab Summer,” bringing with it chaos and violence. Yet the violence has not affected all Middle Eastern countries. Certain wealthy Arab nations have seemingly been able to find a way to “work things out” temporarily.

The Hindu reported that the “Emir of Kuwait simply handed out bonuses of 1,000 dinars (about $3,000) transferred to every bank account, the Saudi Arabian King Abdullah injected $37 billion in pay rises and grants to students,” and “many Gulf countries have raised oil and fuel subsidies…”

In Libya’s case, the uprising took a different turn. There, the arrest of a lawyer and human rights activist sparked a “Day of Rage” against the nation’s government and its leader, Moammar Gadhafi.

“Libyan state media maintained a news blackout, but opposition groups used Facebook, Twitter and other social media networks to send out reports and images of demonstrations and clashes,” Guardian reported.

The government showed zero tolerance for the rebellion. The nation’s military attacked civilians—something the Egyptian military refused to do earlier this year. Soon the conflict escalated into civil war with military and financial repercussions for Libya—which is ranked 11th in oil exports.

“It’s absolutely horrific,” a nurse at Tripoli told BBC News, adding, “There is a bridge about 20m from where I am in the hospital, and one side of the bridge is pro-Gaddafi and one side of the bridge is anti. They’re chucking rocks and everything at each other, and it’s just awful. Last night there were massive rocket-propelled grenades and heavy arms fire, small arms fire, and that went on for about three to four hours. The patients are absolutely petrified. And the staff are petrified. We had rebels inside our compound last night and they said they were trying to protect us but they were actually trying to gain a better vantage point at some snipers across the road.’”

Only a few days from the 42nd anniversary of the military coup that placed him in power, Mr. Gadhafi became a fugitive.

“When Gadhafi marked 40 years, he put his picture everywhere—images of him as a brash young army officer, the self-styled philosopher, the king of all African kings,” Voice of America stated. “Today, those posters are still here, only they are on the street, stepped and stomped on by the people he once led. Back in 2009, there were fireworks. Now, tracer bullets light the sky of a Tripoli in blackout.”

“The mood was festive,” Guardian stated. “The crowd included women in hijabs wearing rebel shawls, an elderly man in a dapper suit and a group of traffic policemen sporting their white, colonial-style uniforms. After Friday prayers several hundred people poured out on to the marble steps of the Jamal Abdul Nasser mosque, Tripoli’s biggest. And then the chanting began. First: ‘God is great.’ Next: ‘Death to Gaddafi.’ Then: ‘All Libyans are brothers.’ Then, once more: ‘Death to Gaddafi.’”

Libya is the third country to attempt to oust its leader. But the fighting is not over, as Mr. Gadhafi’s loyalist supporters continue to fight for him in a few cities, including his hometown of Sirte.

Since Tripoli’s fall, more than 40 countries, including the Arab League, have recognized Libya’s new temporary political leadership, the National Transitional Council (NTC). Yet professor Daniel Serwer of the Johns Hopkins School of Advanced International Studies in Washington believes a different entity should take the lead: Europe.

“Europe, because of Europe’s vital interests, oil and gas supplies, the question of migration which Europe would like to avoid; but at the same time, I think it would be important for the UN Security Council to lay out some goals that the Libyans and the international community can share: a more democratic Libya, a unified Libya, one that can govern itself, and one that treats all its citizens correctly. But you’ve got tribal divisions, east-west divisions, you’ve got secular/religious divisions, you’ve got a continuing resistance effort by Gaddafi’s forces, these are troublesome at best, catastrophic at worst.”

Elsewhere, in Syria, the “Arab-spring-turned-summer” has not been tolerated either, with government forces firing on protesters.

“Taking up arms is not an option,” a member of the Local Coordination Committee opposition coalition told the newspaper.

Amnesty International released a report regarding treatment of arrested protesters: “The accounts of torture we have received are horrific,” the organization’s researcher on Syria stated.

Based on the report, Guardian said, “The majority of victims were tortured or ill-treated, with injuries ranging from beatings, burns and blunt-force traumas to whipping marks, electrocution, slashes...” and other abuses.

At least 1,800 protest-related deaths in Syria have been reported since March.

The violence has prompted tens of thousands of Syrians to flee, and has been widely condemned internationally.

The waves of unrest in the Arab World have sent ripple effects across the globe, particularly in the price of oil.

“Attempts to avert the spread of popular unrest that has swept neighbouring countries have led oil-producing countries to pour billions of additional dollars into social spending, raising the oil price that they need to cover this expenditure,” the Centre for Global Energy Studies reported.

But what about the millions living in a transformed Middle East?

For millennia, whether under democracy or dictatorship, pursued through conflict or non-violent demonstrations, man’s attempts to bring about, or prevent, political change nearly always result in poverty, misery, despair—and bloodshed.

The most recent developments in the Middle East are another terrible example. Democracy has never been popular there, nor has it persisted for long as any nation’s form of government in the grand scheme of things.