This website requires the use of Javascript to function correctly. Performance and usage will suffer if it remains disabled.
How to Enable Javascript
World News Report: February 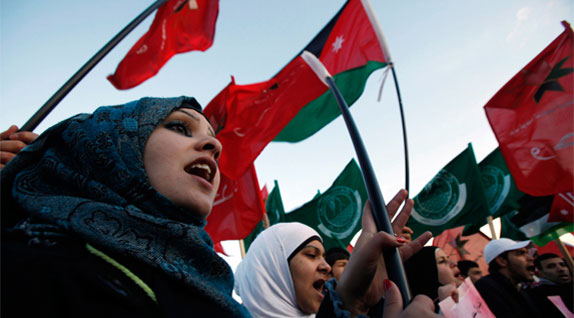 The U.S. president delivered his annual State of the Union address last week. A theme of the speech was the importance of regaining America’s position as the world’s lone superpower. The rise of China, along with the decline of the American dollar, has brought a global shift in power. The White House recently held a state dinner in honor of Hu Jintao, the Chinese president. Incredibly, during the dinner, a Chinese pianist played as entertainment right in the White House a very popular song in China that calls Americans “jackals.” When questioned about this, the White House press secretary actually defended their right to do this. Truly God is “breaking the pride” of America’s “power” (Lev. 26:19).

During Mr. Hu’s visit, the U.S. president said that he welcomes the peaceful rise of China. Most experts now predict that the Chinese economy will pass the American economy by 2020—just nine years. The reality is that it will almost certainly happen long before this date, and this will have profound repercussions on both the United States and the world.

While much of the news media across the country report on inconsequential, meaningless events, America remains embroiled in what could be seen as three wars—Iraq, Afghanistan and a “third war” on the border of Mexico. These three conflicts are becoming more and more connected. Members of Mexican drug gangs are using terrorist tactics such as beheading, and an Iranian book of terrorist martyrs was recently found in Arizona near the border.

There is also the endless fight going on daily in America between the political left and right, and everyone in between, about what to do regarding the nation’s absolutely colossal and fast-worsening debt problem. The debt is scheduled to hit $14.3 trillion by March 4, with the Republicans in Congress threatening to shut down the government if the president and the Democrats do not rein in spending. Understand that the American gross domestic product (GDP) of $13.9 trillion is now officially smaller than its debt, now about $14.1 trillion!

But this does not count the debt of cities, counties and states within America, which very directly threaten to worsen the federal deficit should any of these go bankrupt. It is currently illegal in America for a state to declare bankruptcy, but many states are looking into how this may be necessary. Only four of the 50 states currently have a balanced budget. And some big cities, such as Detroit, were they to go bankrupt, would be worse than the collapse of certain whole states that are not as big. If the government tries to bail out certain states—think California, Illinois, New Jersey and Michigan, but also others—the results for the federal government would be catastrophic in the long run, and probably even in the short or very short run.

If the United States does not dramatically cut spending, it faces three choices—all very bad and very painful: (1) Wait for interest rates to rise by the Moody’s and Standard and Poor’s rating agencies, which will add hundreds of billions more per year to the debt, (2) start printing money to make up the shortfall (about $1.5 trillion this fiscal year) or (3) default on its debt.

The first scenario will bankrupt the country even more quickly than is now scheduled, the second will destroy the economy through the path of hyperinflation and the third option leads to all the catastrophic problems that individuals face when they do such a thing, only this time it involves the most powerful government in the world. The effects of this would be so far-reaching that no one wants to even think about such a “nightmare scenario.”

Realize that the United States owes (just) China $1 trillion in bond debt. Now remember that God says in Proverbs that “the borrower is servant to the lender” (22:7). America is no longer the master of the world. Its masters—plural—merely include China as its biggest one.

As the United States and Britain teeter on the brink financially, other nations are experiencing or facing outright collapse of their governments. In January, the government of the tiny African nation of Tunisia collapsed after a single protester burned himself to death in public in mid-December. This event sparked widespread riots in Egypt last week, a strong U.S. ally of 81 million people. Protesters stormed the streets of Cairo and other Egyptian cities to challenge the rule of longstanding, U.S.-backed Egyptian president Hosni Mubarak. This is just one of many reasons that up to two million people are protesting on the streets of Cairo today. Eighty-two-year-old President Mubarak disbanded his cabinet on Friday night and appointed a vice president for the first time since coming into office almost 30 years ago.

Contributing to the disorder, rioters attempted to occupy the foreign ministry building and state TV building. Buildings are being looted, vandalized and burned. Several prisons were abandoned by guards, and hundreds of prisoners have escaped. Museums housing millennia-old artifacts are still at risk of looting. Flights are being cancelled—into and out of the country. In the words of one protester, “I’ve been here for hours and [been] gassed and keep going forward, and they keep gassing us, and I will keep going forward. This is a cowardly government and it has to fall. We’re going to make sure of it” (Fox News).

Experts are now predicting that Yemen may be the next nation to crumble. All eyes are also on Lebanon and Jordan as well as on several North African countries, such as Algeria and Libya. Just last night King Abdullah II of Jordan fired his entire government because of large street protests all across Jordan. (Of course, the nation of Israel is closely watching the crisis like no one else because of what is at stake for a tiny country surrounded by enemies while almost certainly losing a big ally such as Egypt. I would add that the Israeli government is almost at the point of what I would call “nervous breakdown” because they are so concerned.)

Finally, watch oil and food prices. First, general insurrection across the Mideast will have a rising (and at this point unknown) effect on the price of oil. This will be felt at the gas pump around the world. But rising food prices are already playing a role in these various Mideast revolutions. Consider this from INSS Insight about the true picture in Egypt, where 42 percent live in poverty and almost half are illiterate (emphasis mine):

“Egypt has a population of 81 million; the annual growth rate of the population is estimated at 2 percent…The economic situation of the weaker classes, government corruption, and the encouragement the population drew from the uprising in Tunisia underlay the spontaneous eruption of the protests. While those close to the Egyptian regime enjoy a lavish lifestyle, the weaker classes stagger under the burden of the most basic subsistence and the middle class is disappearing. Unemployment stands at close to 10 percent and the price of basic foods is skyrocketing—in part because of the steep rise in food prices worldwide, which despite the subsidies for basics goods has affected prices on the local market. This phenomenon is also a fundamental reason for the waves of protest in Tunisia, Yemen, and Algeria. The standard of living of the lower class in Egypt is particularly low, at the level of basic existence, because the average income is much lower than the international average and because the country lacks advanced mechanisms of social welfare available in developed nations. As a result of urbanization, more than two-thirds of the Egyptian population work in services, trade, and industry, and unlike in the past, have no access to sources of food in the rural areas.”

It is only a matter of time before a powerful strongman (with an equally powerful religious figure alongside) will stand up to unify Europe—and “clarify” events—in the midst of widespread and worsening economic and political instability.