This website requires the use of Javascript to function correctly. Performance and usage will suffer if it remains disabled.
How to Enable Javascript
World News Report: November 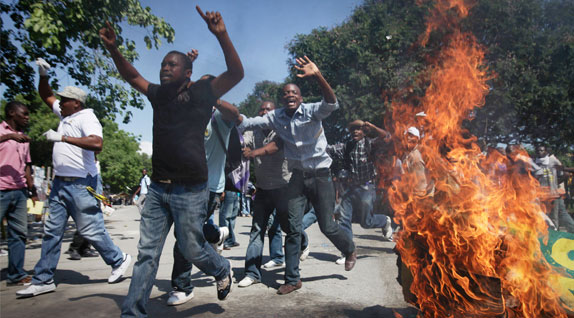 When examining news around the world, there is very little good news. In fact, with daily headlines reporting murder, violent crime, famine, economic instability, rumors of war, rampant disease, and much more, it is easy to see why some people completely tune out and stop watching world events altogether. The world is truly entering a time unlike any other in mankind’s history. Watching it all unfold will never be an enjoyable activity, but it will certainly be one that is inspiring, as we see the final great prophecies playing out, meaning the kingdom of God is coming closer.

The cholera outbreak in Haiti has grown much, much worse. The death toll from this awful disease has already risen to more than 1,600 people—over 100 are dying each day and this daily number is accelerating. Over 72,000 people are now infected. Hospitals are seeing around 300 new people per day experiencing symptoms of cholera. But many never make it to the hospital. The top aid group Doctors Without Borders said that its facilities in Port-au-Prince have been overrun. The organization’s emergency coordinator said, “We’re worried that we won’t have the capacity to treat all patients in the coming days. They’re arriving in large numbers, our hospital is completely full, we’re even having to refuse referrals because we know we’re unable to treat them” (Agence France-Presse).

The worsening outbreak has led some frustrated Haitians to blame the United Nations peacekeepers for supposedly spreading the disease. Unsubstantiated rumors that the cholera outbreak began in one of the UN facilities resulted in thousands of Haitians protesting earlier this month.

But Haiti is far from the only place suffering serious disease outbreaks. Consider this. A hospital in Peterborough, Ontario—a city in the heart of the Western World—recently closed one of its units to new patients in order to control the spread of two deadly superbugs—MRSA and C. difficile. A spokesperson for the hospital stated, “What’s different in this case is two fairly significant outbreaks on one unit occurring at the same time—that’s unusual” (The Star). It is only a matter of time before these outbreaks become almost commonplace. And despite all scientific efforts, doctors and scientists have very few methods to control the spread of these diseases.

We are also seeing a number of reports come in that have sprung from my Four Horsemen broadcast series about how more wild animals (“beasts”) are showing no fear in the presence of humans. In fact, a few of the reports that viewers in the world write us are chilling—and they are describing personal experiences.

In Europe, the financial condition of European Union member states is causing growing instability for the continent. The greatest concern is over growing budget deficits in member nations that, if left unaddressed, could result in the weakening and destabilizing of the euro. Sixteen nations in what is called the “euro zone” share the currency.

The latest country to experience major economic problems is Ireland. After the nation’s leaders initially rejected the need for a bailout, they eventually requested aid under mounting pressure from leaders in the EU and European Central Bank. The financial package is around $90 billion and will help shore up Ireland’s government and its failing banking system.

Although on the surface the problem appears to be over just one more country’s financial struggles (in this case, Ireland’s), there is in fact much more at stake. There is very real fear that Ireland’s economic problems will cause a domino effect and spread first to Portugal and then probably immediately after to Spain, both of which are also teetering on the brink of financial failure due to large deficits. The amount needed to make both these bigger countries solvent is much larger than Ireland, with Spain also expected to command a much bigger bailout than Ireland. Note that, according to the chief euro-region economist in Frankfurt, the latest bailout “probably won’t halt” the spread of Europe’s economic problems (Bloomberg). The President of the European Union, Herman Van Rompuy, stated, “We all have to work together in order to survive with the euro zone, because if we don’t survive with the euro zone, we will not survive with the European Union” (The Wall Street Journal).

Last spring, Greece was bailed out by the euro zone and a $1 trillion safety net was set up by the European Union and the International Monetary Fund. Some of Ireland’s bailout will come from this “safety net” fund. Real, true—and raw—fear is now spreading all across Europe. We need to carefully watch this fear grow in Europe (and elsewhere) because it is ultimately fear that will drive Europe toward the prophesied solution under two men that we know is coming.

In a stunning November 24 speech, Nigel Farage, the leader of the United Kingdom’s Independence Party, spoke at the European Council meeting of economic governance. His incredibly passionate message began by addressing the EU president directly. It says much to those with eyes to see and ears to hear: “You’ve been in office for one year. And in that time the whole edifice is beginning to crumble. There’s chaos. The money’s running out. I should thank you. You should perhaps be the pinup boy of the euroskeptic movement. But just look around this chamber this morning. Just look at these faces. Look at the fear. Look at the anger…You know, they’re beginning to understand that the game is up. And yet in their desperation to preserve their dream they want to remove any remaining traces of democracy from the system. And it’s pretty clear that none of you have learned anything.”

“Untold millions must suffer so that your euro dream can continue. Well, it won’t work. Because it’s Portugal next, with their debt levels of 325% of GDP. They’re the next ones on the list. And after that I suspect it’ll be Spain, and the bailout for Spain would be seven times the size of Ireland and at that moment, all of the bailout money has gone. There won’t be any more!

“But it’s even more serious than economics because if you rob people of their identity, if you rob them of their democracy then all they are left with is nationalism and violence. I can only hope and pray that the euro project is destroyed by the markets before that really happens.”

These are most ominous words. They come from an insider who sees circumstances for what they are and goals for what they mean, as well as the coming resurgence of nationalism, but more important, the violence that will be crucial in driving the demand for a strong man to seize control in order to bring what will be seen as “the only right solution.”

So much more could be reported about other world events in just the past month, such as the recent North Korean attack on a South Korean island and the devastating leak of secret U.S. military documents, but space does not permit. However, all these events together bring a certain insight to those who recognize in them how men and their governments view the problems the nations are facing, as well as what they believe should be done about them. (Consider the long quote above.) One is left aware of the fact that civilization is completely overwhelmed by problems that have no chance whatsoever of being solved. But men continue trying, themselves unaware that they can bring no lasting solutions. Since leaders do not see the coming kingdom of God anywhere in their thinking—read II Corinthians 4:4—they are left to believe that somehow they will “figure things out.”