This website requires the use of Javascript to function correctly. Performance and usage will suffer if it remains disabled.
How to Enable Javascript
2010 Midterm Elections: America Votes for Change—But Is It the Right Kind?

2010 Midterm Elections: America Votes for Change—But Is It the Right Kind?

Three times in relatively quick succession, United States voters sent its government a message: “We want change from the country’s current direction.” Each time, politicians and powerbrokers seemed to interpret the message to their own liking. Could the problem lie with everyone and everything involved: the senders, the recipients—and the message itself? 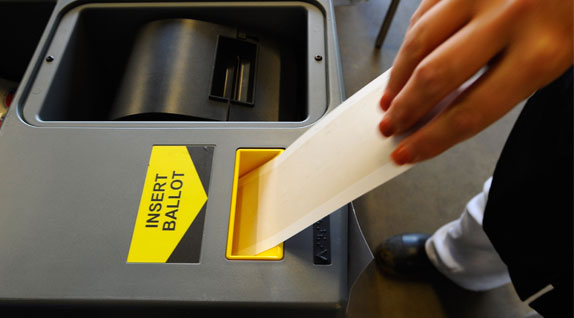 Kevork Djansezian/Getty Images
Voters head to the polls for the midterm elections: A voter places her ballot into a ballot box after voting for the 2010 midterm elections in the Venice neighborhood of Los Angeles, Calif. (Nov. 2, 2010).

Midterm Election 2006: Having grown tired of politicians focusing almost exclusively on the war on terror, the American people voted and changed the leadership of Congress.

Presidential campaign 2008: When the harsh reality of the country’s economic woes—the U.S. was on the brink of fiscal meltdown—came to light just before the election, a majority of voters cleaved to the message of “hope and change.”

Midterm Election 2010: After seeing politicians pass controversial legislation that roughly half the country either did not want or wanted more time to study, America voted for change yet again.

A Republican tsunami swept through the House of Representatives, changed the monopoly of power in the Senate, and seized gubernatorial state legislature seats. The political map of the United States changed to right-wing red overnight, spotted with Democratic blue strongholds, mainly along the East and West coasts.

But is this the kind of change America truly needs?

Over the past two years, America has passed several stimulus bills, believing it would keep the rising unemployment rate from soaring past 8 percent. Yet official unemployment shot to 10 percent—not counting those who have given up on finding a job. The actual jobless rate is much higher.

At street corners and highway on-ramps and off-ramps, panhandlers carry makeshift cardboard signs begging for money, food or work. This is not new. It is apparent by their ragged, world-weary appearance that most were down and out long before the Great Recession. Today, however, street beggars are far more noticeable, particularly in midsized cities, than 10 or even five years ago.

Among this growing tide of panhandlers is a new phenomenon: thirtyish and fortyish women, resembling soccer moms whose worlds have been turned upside down, holding homemade signs: “Lost Job, Need to Feed Kids!”—“Must Pay Rent!”—“Need help! About to Lose Home!” They shield their faces behind the signs, clearly embarrassed, perhaps wondering, How did life come to this?

Then there are the underemployed, those who have jobs, but barely earn enough to make ends meet. They work long hours for little pay, or only part-time because more hours are not available. And they survive on food stamps due to meager incomes.

Meanwhile, America tries to spend itself out of fiscal calamity. The balanced budget of the 1990s is a distant memory. In its place are trillions of dollars of national debt, government-owned car manufacturers, and “cash for clunkers” stimulus deals that essentially served as Band-Aids on cancer. And soaring inflation is appearing on the horizon. Think Greece. Think Zimbabwe. Think disastrous future.

Despite voting for a change, 2010 midterm election exit polls revealed Americans are pessimistic the country’s situation will improve: “Voters expressed great unhappiness with national conditions and with the performance of the federal government,” Pew Research Center reported. “Half (50%) said they were very worried about economic conditions and another 36% were somewhat worried; most (62%) said the country was on the wrong track.”

A Rasmussen Reports exit poll offered similar figures: “Sixty-three percent (63%) of those who voted today are at least somewhat angry at the current policies of the federal government. That includes 42% who are Very Angry.”

In addition, the poll showed, “59% of Likely U.S. Voters think it is at least somewhat likely that most voters will be disappointed with Republicans in Congress before the next national elections. That includes 38% who say it is Very Likely.”

Yes, American voters are angry, frustrated, troubled—and scared. Angry because they feel no one is listening to them. Frustrated because the “hope and change” promised has failed to quickly materialize. Troubled because it is obvious to all, both within the nation and overseas, that the United States has reached its peak and is now sliding down from its pedestal as the world’s lone superpower. Millions wonder what this ultimately means for a nation long accustomed to being number one. And scared because with disappearing businesses, disappearing jobs, disappearing banks, home foreclosures, pressured employee buyouts, forced retirements, trillions of dollars in national debt, and runaway inflation hovering over the horizon—all while the economies of China and Europe are looking up—America’s future looks bleak.

People want real leaders with real, lasting solutions. Instead, what they see are politicians jockeying for positions, each trying to prevent the other from gaining the upper hand. None address America’s underlying problems.

For the past 6,000 years, humanity has tried nearly every form of government imaginable: monarchies, communism, socialism, dictatorships, democracies, republics—and all have failed. Why?

Winston Churchill said in a 1947 House of Commons speech, “No one pretends that democracy is perfect or all-wise. Indeed, it has been said that democracy is the worst form of Government except all those other forms that have been tried from time to time…”

The United States was established as a democratic republic with checks and balances among three branches of government: executive, legislative and judicial. For the American people, democracy ensures liberties for individuals. Each can choose for himself whether to pursue religion, any kind of religious belief—or reject it altogether. Democracies guarantee free choice.

This includes the pursuit—even to the extreme—of whatever titillates the five senses. Sadly, this is an age when virtually all bow down to an internal “god”: human nature. Many people think it is ludicrous to believe that God exists. And if He does exist, they do not want Him prying into their business.

Except, of course, when one learns that he has cancer and only six months to live—or when he is let go from a comfortable salary and has a family to feed and clothe, and a mortgage to pay. Then suddenly many become fervent “believers” (if only temporary). They seek religion to know what God can do for them…not bothering to ask what He requires.

In his book America and Britain in Prophecy, David C. Pack, publisher and editor-in-chief of The Real Truth magazine and voice of The World to Come program, wrote, “Most people will not seek God unless forced to—unless severe trials or other circumstances drive them to God. During good times, most are happy to trust in their own strength, crediting themselves for their successes and achievements, when they may have had little to do with blessings that came to them. On the other hand, these same people generally blame God when things go wrong in their lives.

“But understand this. God does not and has never owed blessings to anyone. He may choose to bless abundance and a generous portion of God’s bounty.

“So it is with the peoples of America and Britain. God has bestowed to them astonishing, unparalleled blessings beyond what any nation has ever enjoyed.

“But our peoples have neither been grateful for these birthright blessings, nor sought God, repenting of our national sins!”

Eager to seek a divine solution to their problems, most listen to ministers preaching, “God loves you” and, “Just give your heart to the Lord.”

Such false ministers teach traditions and commandments devised by men (Mark 7:6-7, 9). They embrace religious holidays and celebrations of their own making, not God’s (Isa. 1:11-14).

Meanwhile, the secular mind, in its “wisdom,” worships at the altar of its own intellect, firmly believing that it can work out its own solutions.

Atheists, agnostics, sincere believers of humanly devised religions—all are deceived into thinking that they know how to live. Yet they are all wrong.

Human beings were created incomplete, lacking a vital, life-changing component. Science cannot discover it. This world’s many religions do not understand it. Yet, without this missing component, “it is not in man that walks to direct his steps” (Jer. 10:23)—and, “There is a way which seems right unto a man, but the end thereof are the ways of death” (Prov. 14:12). Humanity gropes about for solutions in vain, because most will only listen to what they want to hear—not what they need to hear.

This spiritual blindness and self-deception permeates America, as well as the rest of the world. It fills the pages of human history. It is the reason that governments of men—along with manmade solutions to save them—are failing...and always will.

Thousands of years of man trying his own systems of government should have taught us this. Tragically, it has not.

There is only one government that will ultimately succeed—now just over the horizon!

To learn more, read Why Man Cannot Solve His Problems and America and Britain in Prophecy.