This website requires the use of Javascript to function correctly. Performance and usage will suffer if it remains disabled.
How to Enable Javascript
Border Under Siege – Violence Along Border Fuels U.S. Unrest

As the Mexican drug war intensifies south of the Rio Grande, so does the political debate over the effects on the United States side of the border.

The U.S. government remains divided on the issue, with some saying the drug wars have not affected crime levels significantly, while others argue that they are threatening to turn America into a war zone. 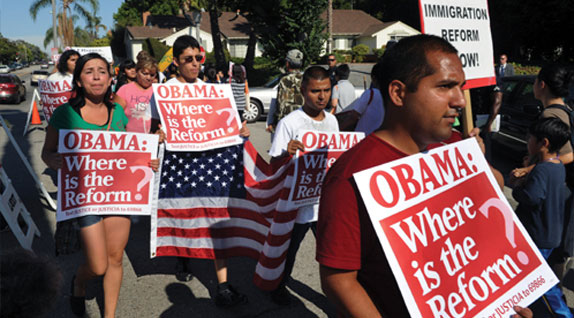 “No one was injured on the U.S. side, but one bullet came across the Rio Grande, crashed through a window and lodged in an office door frame at the University of Texas at El Paso. Police are also investigating reports that another errant round shattered a window in a passing car. Witnesses at a nearby charity said at least one bullet hit their building, too.”

Bullets from guns in Juarez can travel the several hundred yards across the Rio Grande, landing up to a mile from where they were fired.

The continued threats to Mexico’s livelihood, security and infrastructure have caused many citizens to flee to America in search of work and a better life. Currently about 11 million illegal immigrants live in the U.S., making up slightly more than 4 percent of the entire adult population.

The immigration issue has bitterly split the country, prompting protests nationwide, with some even calling for boycotts of states that treat illegal immigrants as criminals.

One law that has divided the country is the Arizona anti-immigration law. The legislation, which continues to be enforced by Arizona authorities, allows police officers to require proof of residency if someone is legally detained.

“Hundreds of marchers protesting Arizona’s hard-line stance against illegal immigration took to the streets [July 30] even as the local sheriff launched raids to arrest illegal migrants—vivid signs that the court ruling stopping most of a controversial state law will not quell the furious debate over immigration here…The protesters began marching well before dawn, fanning out across the city, staging acts of civil disobedience and arguing that Arizona remains inhospitable to immigrants. Dozens of protesters were arrested.”

Those who argue against the law say it permits racial profiling and harassment of individuals based only on the suspicion that they may be in the country illegally, while supporters say it cuts down on cross-border violence. Cities in states on the border, such as Phoenix, rate among the top 10 most violent in America.

It has become so dangerous that the Bureau of Land Management sent the Arizona government signs to post near the border, warning those traveling through the area that it is a place of frequent human smuggling and drug trafficking.

“Pinal County Sheriff Paul Babeu, whose county lies at the center of major drug and alien smuggling routes to Phoenix and cities east and west, attests to the violence,” The Washington Times reported. “He said his deputies are outmanned and outgunned by drug traffickers in the rough-hewn desert stretches of his own county.

“‘Mexican drug cartels literally do control parts of Arizona,’ he said. ‘They literally have scouts on the high points in the mountains and in the hills and they literally control movement. They have radios, they have optics, they have night-vision goggles as good as anything law enforcement has…This is 70 to 80 miles from the border—30 miles from the fifth-largest city in the United States.’”

According to a July 2010 Gallup poll, Americans are divided on the issue of immigration: 50 percent believe the focus should be on stopping the flow of illegal aliens entering the U.S., while 46 percent believe a plan should be developed to assimilate those already in the country.

Congress recently approved an additional $600 million in funding for increased border patrol staff, unmanned drones and other infrastructure along the U.S./Mexico border. But with drug-war violence continuing to escalate, many are doubtful these efforts will be sufficient.