This website requires the use of Javascript to function correctly. Performance and usage will suffer if it remains disabled.
How to Enable Javascript
Losing the War on AIDS – Is There Any Hope?

Losing the War on AIDS

Is There Any Hope?

The 30-year battle against AIDS is seemingly unwinnable, with no cure in sight. Yet there is an aspect that educators, governments and aid groups often overlook, which offers hope to millions with HIV. 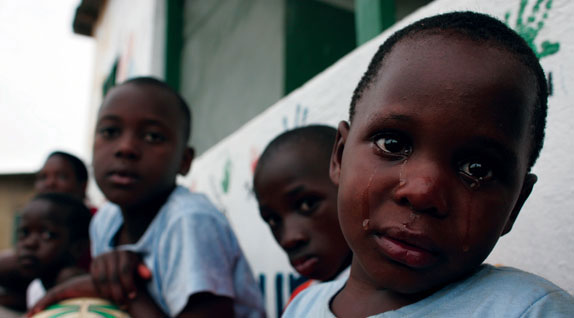 Marco di Lauro/Getty Images
Without a home: A three-year-old HIV positive orphan cries at the Aidchild Orphanage in Mpigi, 60 km north of the capital Kampala, Uganda. She was abandoned in Kampala at a hospital and refused by an orphanage due to her condition.

Inside a private clinic in a rural South African town lies a male patient. Almost motionless, he says that he has not felt well for the past two weeks. Anxious family members brought him here because he stopped eating more than seven days ago. He has constant diarrhea, difficulty breathing and a dangerously high fever.

At first glance, the man looks chronically ill. His muscles have wasted away, leaving only skin wrapped around his bones.

During the examination, he gives a smile as he tries to hide his pain. An oral thrush infection has caused lesions in his mouth, making it difficult to swallow. His brother must constantly wipe his mouth of dripping saliva.

This is a picture of a man losing his battle against one of the most gruesome diseases ever to plague the human race—AIDS. Without help, he will probably not see the end of the week. Without antiretroviral (ARV) drugs, he will die.

Similar scenarios are reality for more than 33 million HIV-positive men and women worldwide, each with a different face, name and identity. While there is no known cure for the virus, ARVs are one of the few weapons doctors have in their arsenal to slow its progression. But even though patients taking ARVs have a chance to live longer, the drugs’ side effects can also be deadly, including increases in secondary cardiovascular disease, diabetes, kidney toxicity, as well as liver and nerve damage.

So the search for a cure continues.

Seemingly, no stone has been left unturned in the global fight against the human immunodeficiency virus pandemic and its end stage, AIDS. Donors contribute millions of dollars annually to try to combat and overcome this common enemy. But the problem continues to expand—and their efforts have minimal impact.

As with nations when they go to war, aid groups, governments and health agencies want to win. Yet almost all evidence seems to show that the battle against AIDS has already been lost.

Is there something they are missing in this seemingly hopeless fight?

HIV first appeared on the world scene in 1981. It started a ripple effect that soon engulfed the world. According to the United Nations organization UNAIDS, health officials worldwide register 3 million new HIV cases yearly and 2 million infected people die each year from the virus. As a result, approximately 12 million children are orphaned annually.

The highest incidence of AIDS occurs in Africa, with the United Nations estimating AIDS could kill more than 80 million Africans by 2025.

Sub-Saharan Africa is the most affected as it contains 67 percent of Earth’s HIV cases. The most recent statistics reveal that in 2007, 72 percent of global AIDS-related deaths occurred there. In addition, out of an estimated 2 million adolescents under the age of 15 with the virus worldwide, 90 percent live in this region.

According to UNAIDS, South Africa is one of the sub-Saharan countries with the largest percentage of people living with HIV—more than 16.9 percent.

Dr. Dewald Steyn, an infectious disease physician at South Africa’s University of the Free State, stated in an email interview with The Real Truth that current HIV statistics are reliable, but in his opinion, the extent of the problem is much bigger than what is reported. Currently, he said, there is “no cure possible” and “prevention strategies are failing.”

For example, South Africa, an HIV-prevalent country, is a nation with limited access to medication. While the country has an estimated 5.7 million reported cases, a UNAIDS South Africa 2010 Progress Report found that the “number of persons who are receiving treatment at public health facilities has reached approximately one million.”

This is a shocking statistic considering the decrease in the cost of treatment over the last few years. According to the most recent data from the Results for Development Institute, first-line combination HIV treatment decreased from $10,000 per patient yearly in 2000 to only $90 in 2007. But given that 80 percent of Africans live on less than $2.50 a day, governments and international aid groups must still cover most medical costs—a prospect which is becoming less and less of a possibility.

Worldwide aid and donations that help countries obtain ARVs and implement prevention strategies are as essential as fuel to an engine. Yet the global recession has threatened to jeopardize charitable contributions.

Recently, humanitarian aid organization Doctors Without Borders reported, “…major international funding institutions such as PEPFAR [U.S. President’s Emergency Plan for AIDS Relief], the World Bank, UNITAID [non-governmental aid organization], and donors to the Global Fund have decided to cap, reduce or withdraw their spending on HIV treatment and antiretroviral drugs over the past year and a half.” This would mean fewer people can start on ARVs.

The article further explained that in the 2009 fiscal year, donations to the Global Fund, the leading organization in the battle against HIV/AIDS, have decreased 8 percent to 12 percent, which will likely have negative implications for countries such as South Africa.

“Every single HIV positive person in South Africa needs to be put on ARVs to stop the spread of the disease,” Dr. Steyn said. “If your viral load is undetectable, you do not spread HIV. Question remains whether this would be possible at all in South Africa—probably not.”

Yet even with an increase in treatment, Dr. Steyn explained that ARVs and condoms are still insufficient to prevent new infections.

While donations are decreasing, the amount of funds needed to combat the pandemic is increasing. According to UNAIDS, $15.6 billion was available in 2008 to combat HIV/AIDS globally. In 2010, however, $25 billion will be required—with more cutbacks by international aid groups feared.

“Backtracking by international donors in funding HIV/AIDS risks undermining years of positive achievements and will cause many more unnecessary deaths,” Doctors Without Borders cautioned. “If there is reduced funding, then it will mean more people will die, and we will have more orphans.”

Decrease in funding aside, Dr. Steyn said he feels governments and aid organizations are not doing enough to counter the problem, especially in his home nation.

“South Africa denied the problem far too long,” he said, “this country doesn’t have the resources or man power to control the epidemic now. This is sad news, but reality on the ground.”

Hope on the Horizon?

Numerous studies have concluded that AIDS is spread primarily through risky sexual behavior with more than one partner, especially among homosexuals, and intravenous drug use. Thus, to win the war on AIDS, researchers, medical experts and organizations have tried advocating various methods—from increased condom use to abstinence.

“The most reliable ways to avoid transmission of sexually transmitted diseases (STDs), including human immunodeficiency virus (HIV), are to abstain from sexual activity or to be in a long-term mutually monogamous relationship with an unaffected partner,” a United States Centers for Disease Control and Prevention report acknowledged.

Even armed with a clear-cut answer to the problem, health officials know they cannot police people’s conduct. Instead, the most they can do is to issue cautionary statements and treat the tragic aftereffects. Some have even gone to the extreme of supporting change of existing laws to accommodate the behavior.

In a recent speech, the former Executive Director of UNAIDS advocated “making it safer” for those who were abusing drugs to access clean needles as well as softening legislation that criminalizes homosexuality. The Associated Press summarized his statement as “groups whose behavior is criminalized are at a higher risk of infection for HIV-AIDS partly because they are unable to live their lives openly and often lack access to preventative measures and treatment.”

Ask yourself: Would this really work? Would making activities lawful, which were once considered harmful, really stop the spread of HIV?

In the nearly three decades of the war against HIV/AIDS, mankind has seemingly tried everything in its power to stop its spread. Yet tracking HIV back to the first reported cases and along its destructive path reveals that the virus is not merely a result of “bad luck.” It is mankind’s conduct—and not just a microscopic virus—that is to blame.

There is only one solution to eradicate the HIV crisis: change the nature of man. It is man’s conduct that is the true cause behind the pandemic.

Does this mean the fight against AIDS is hopeless? How could man change human nature?

The definitive source on the topic, the Bible, makes plain “that the way of man is not in himself: it is not in man that walks to direct his steps” (Jer. 10:23).

Along with detailing elements of human nature, the Bible also foretells a worldwide change in mankind’s nature as a whole. Although it is impossible for a humanly devised government to do so, the Creator of the Universe promises He will soon implement a world-ruling supergovernment capable of enforcing laws to stop the spread of disease. Under His rulership, anyone who is sick, lame or dying, will be healed, for He declares, “I am the Lord that heals you” (Ex. 15:26).

No one will be left out, not even an impoverished, ailing man in the tiniest village in Africa, for He is the God “Who will have all men to be saved, and to come unto the knowledge of the truth” (I Tim. 2:4).

All this will be done because God does not want to see mankind suffer nor does He desire that people are sick. He promises: “For I will restore health unto you, and I will heal you of your wounds” (Jer. 30:17).

For more on how people worldwide will have health restored to them, read David C. Pack’s book Tomorrow’s Wonderful World – An Inside View! and booklet The Truth About Healing.

The Truth About Healing