This website requires the use of Javascript to function correctly. Performance and usage will suffer if it remains disabled.
How to Enable Javascript
South Africa’s World Cup – Blessing or Curse?

The nation’s latest bid to promote itself could fuel long-term problems after the tournament. 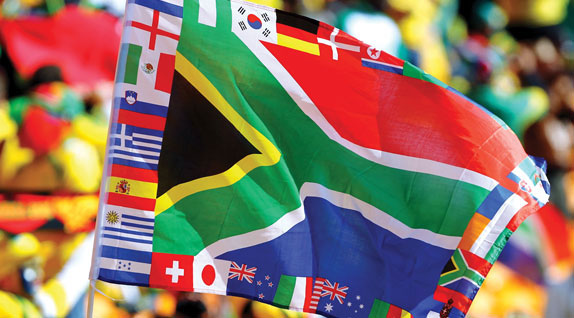 Clive Rose/Getty Images
Uniting the world: A South African flag incorporating the flags of each nation at the tournament is waved at the opening ceremony of the World Cup games (June 11, 2010).

As World Cup 2010 fever sweeps the international community, the spotlight is on South Africa. With more than 500,000 soccer fans in attendance, it appears to be the country’s time to shine. It is the first African nation to host the sporting event since the competition’s founding in 1930.

In preparation for the games, 10 magnificent stadiums were built or renovated, and the first high-speed rail link between the capital of Johannesburg and the main airport became a reality. The bus system was also renovated and major road rebuilding took place. According to estimates, $2.3 billion was spent on stadiums and infrastructure costs alone. The government also spent $170 million for security measures, including a 40,000-person police force, and set up 56 courts to handle World Cup-related crimes.

Authorities speculate the tournament will generate at least $660 million for the economy, as well as increasing future tourism and investment. They also believe it may bring a renewed sense of self-worth and unity to a country still struggling from apartheid-era rifts.

“For South Africa, it’s a question of proving itself, both to itself and the world, and demonstrating what it can do and what it is,” a Der Spiegel article said. “In the case of South Africa, that isn’t easy to say.”

Many South African leaders are excited about the potential effect of the sporting event on the country’s identity. Yet South Africa has been called the most dangerous country in the world not at war. With more than 50 murders a day, a rape every few minutes and a robbery every few seconds, will the World Cup be a dream come true for South Africa’s development or add even greater strain to a land already in turmoil?

Despite the glitter surrounding the tournament, costs have soared 75 percent above original estimates. Financial analysts now project that instead of benefiting the depressed economy, debt incurred preparing for the celebration could greatly overburden it, as with Greece after the 2004 Summer Olympics. 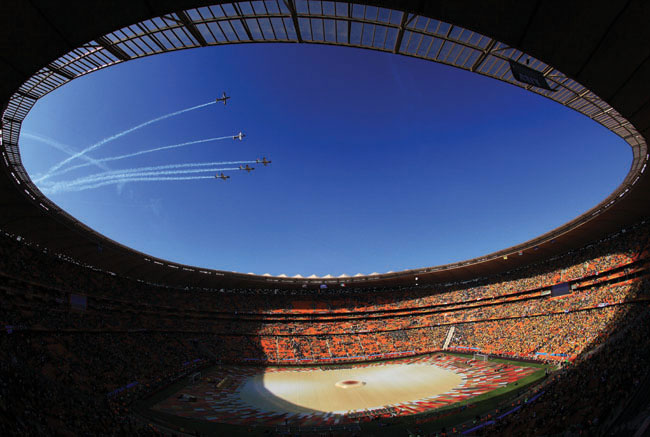 David Cannon/Getty Images
State of the art: Planes fly in formation over Soccer City Stadium in Johannesburg, South Africa, during the opening ceremony of the 2010 World Cup (June 11, 2010). 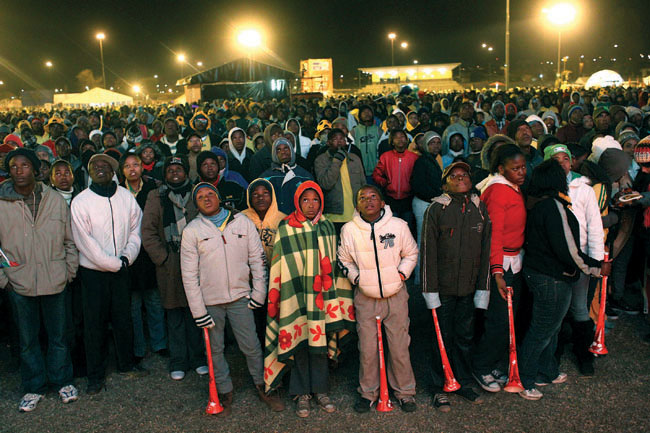 John Moore/Getty Images
Dismayed: South Africans at a Soweto fan park watch a monitor as their team loses to Uruguay during a World Cup match in Johannesburg, South Africa (June 16, 2010).

At the start of the matches, criticism of huge construction company profits and labor exploitation surfaced, with The New York Times reporting that police used tear gas and rubber bullets in Durban to end protests by several hundred security personnel who claimed they were underpaid during the Australia versus Germany match. Bloomberg reported that some impoverished South Africans were removed from their shantytowns before the soccer spectacle began.

On top of economic concerns, health authorities worry the influx of visitors will increase the spread of HIV in a country where approximately 5.7 million people are infected. The non-governmental AIDS organization AVERT estimated that in just 31 days of the games, 1,000 people per day—more than 30,000 during the entire month—will become infected with HIV. And this statistic does not account for foreigners that may engage in unsafe sexual practices during their stay.

Equally worrisome is that more than 40,000 prostitutes from Zimbabwe and other poor nations jammed hotels in Johannesburg and Pretoria ahead of the games.

“If ever there was time to make money, this is the right time,” a Zimbabwean commercial sex worker who came to Johannesburg solely because of the World Cup told The Christian Science Monitor. Another Zambian prostitute quoted by the same paper said she traveled more than 1,700 miles to work there. She now earns about $270 nightly, which could allow her to buy her own car.

The situation prompts the question: what will happen to these women after the games are over?

Plight of the Youth

Another major concern during the World Cup is the possibility of increased child abuse and human trafficking. A government-mandated five-week school holiday will leave thousands of children unsupervised while parents work.

“...Grace Matlhape, CEO of the national HIV/AIDS youth programme, loveLife, worries that many will gravitate towards the fan parks and public viewing areas where...the alcohol-fuelled atmosphere at the fan parks could increase the likelihood of young people engaging in risky behaviour...” a United Nations Office for the Coordination of Humanitarian Affairs report stated.

Thousands of unsupervised children could greatly add to the trafficking problem.

“South Africa is a source, transit, and destination country for trafficked men, women, and children,” a United States State Department report revealed. “Children are largely trafficked within the country from poor rural areas to urban centers like Johannesburg, Cape Town, Durban, and Bloemfontein—girls trafficked for the purposes of commercial sexual exploitation and domestic servitude; boys trafficked for forced street vending, food service, begging, crime, and agriculture; and both boys and girls trafficked for ‘muti’ (the removal of their organs for traditional medicine). The tradition of ‘ukuthewala,’ the forced marriage of girls as young as 12 to adult men, is still practiced in remote villages in the Eastern Cape.”

South Africa, an incredibly beautiful country of pristine beaches, wild game reserves and breathtaking mountain views, appears to have so much untapped potential. Why the overwhelming problems? Why do statistics show that the country has a murder rate eight times the international norm, more than 40 percent live on less than $2.00 a day and more women are raped per capita than any other country?

“South Africa has been likened to a mix of the developed and developing world,” reported research firm Deloitte. “On the one hand, a strong technological and economic base puts it on a par with the well-developed nations of the world. On the other, infrastructure shortfalls have contributed to keeping it from realizing its full economic potential.”

As South African leaders grasp for solutions to their nation’s problems—including those that spur economic growth—what is in the immediate future for South Africa following the World Cup?

“South Africans live in separate but parallel worlds, and old divides continue to exist, 16 years after the end of apartheid, while new ones are opening up today,” Der Spiegel reported. “Their lives do not revolve around big victories. Rather, they revolve around small steps. For them, the process of increasing the positive and diminishing the negative is a slow and incremental one.”

Only after the games have ended, the tourists left, and the direction of the economy is evident, will South Africa truly know if its latest effort to pull itself out of crisis was a blessing or a curse.