This website requires the use of Javascript to function correctly. Performance and usage will suffer if it remains disabled.
How to Enable Javascript
A Nation Opposing Itself – Where Is America Headed?

A Nation Opposing Itself

Where Is America Headed?

The United States is becoming bitterly divided, begging the question: Where is the country going? 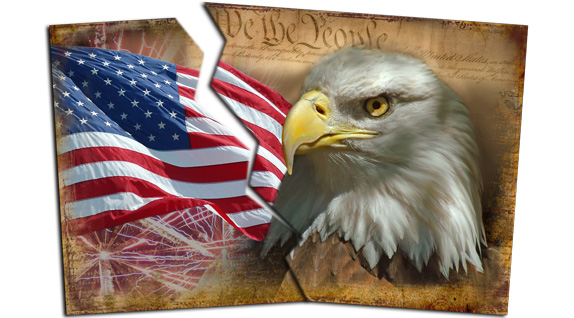 These are tumultuous times in America. The winds of change are blowing. The passage of the hotly contested healthcare reform bill in March 2010 is just the latest in a series of events that have led the country into uncharted waters.

During the past three years, there has been intervention by the federal government at a level not previously seen in the nation’s history. From 2007 to 2009, government intervention in the form of bank bailouts was deemed necessary to correct the subprime mortgage crisis brought on by overinflated rates. This was followed by an auto industry bailout, and then a government overhaul of the healthcare system, which constitutes one-sixth of the United States economy.

These measures have caused discontent over the state of the country. After passing the healthcare bill, only 35 percent of U.S. voters believed that the country was headed in the right direction, according to a Rasmussen Reports national telephone survey.

Supporters of the changes argue they are long overdue, believing that wealth must be redistributed throughout America for poverty to be adequately addressed.

“Inequalities [are] a problem and it has been exacerbated over the last say 20 or 30 years,” former democratic presidential candidate Howard Dean said during a CNBC morning show interview. He later stated, “I think when it gets out of whack as it did in the 20s and it has now, you need to do some redistribution.”

David Leonhardt, a columnist for the The New York Times further explained, “In the broadest sense, insurance is meant to spread the costs of an individual’s misfortune—illness, death, fire, flood—across society. Since the late 1970s, though, the share of Americans with health insurance has shrunk. As a result, the gap between the economic well-being of the sick and the healthy has been growing, at virtually every level of the income distribution.

“The health reform bill will reverse that trend. By 2019, 95 percent of people are projected to be covered, up from 85 percent today (and about 90 percent in the late 1970s). Even affluent families ineligible for subsidies will benefit if they lose their insurance, by being able to buy a plan that can no longer charge more for pre-existing conditions. In effect, healthy families will be picking up most of the bill—and their insurance will be somewhat more expensive than it otherwise would have been.”

But the opposition party is not convinced.

“We are about 24 hours from Armageddon,” Republican House minority leader, John Boehner of Ohio, said before the vote. “This health care bill will ruin our country.”

Politics aside, a question looms over the debate: With all of this division, where is America headed?

Before addressing this question, it is crucial to understand the fierce debate over healthcare reform. In a nation of 300 million citizens, over 45 million—approximately one-in-six—do not have health insurance. Additionally, according to an American Journal of Medicine study published in 2009, 60 percent of all bankruptcies in the United States in 2007 resulted from medical problems.

“For 92 percent of the medically bankrupt, high medical bills directly contributed to their bankruptcy. Many families with continuous coverage found themselves under-insured, responsible for thousands of dollars in out-of-pocket costs.” On average, medically bankrupt families owed $17,943 for uncovered medical costs.

“It is with great humility and with great pride that we tonight will make history for our country and progress for the American people,” Speaker of the House Nancy Pelosi said to members of the House of Representatives in support of healthcare reform. “Just think—we will be joining those who established Social Security, Medicare, and now tonight health care for all Americans.

“In doing so, we will honor the vows of our founders, who in the Declaration of Independence said that we are ‘endowed by our Creator with certain unalienable rights, that among these are life, liberty and the pursuit of happiness.’ This legislation will lead to healthier lives, more liberty to pursue hopes and dreams and happiness for the American people.”

Meanwhile, opponents of government-controlled healthcare believe the industry should remain largely in the hands of private corporations. They say doing so would enable it to operate more cost-efficiently and would prevent the government from potentially incurring trillions of dollars of costs it could not afford, especially given the already enormous national debt and budget deficits.

“Most Americans out there aren’t celebrating today,” U.S. Senate Republican Leader Mitch McConnell said to the Senate after the healthcare bill passed 219 to 212, with no Republican support. “They’re dumfounded by the fact that Congress just passed this 2,685-page monstrosity against their wishes, on the backs of their children and grandchildren, who they know will have to pick up the tab.”

“The fact is, this bill spends $2.6 trillion at a time of near double digit inflation while putting the real problem off for another day. It kicks the can down the road.”

After the vote, Republicans vowed to repeal it if they win the Congressional majority in the 2010 elections.

In an editorial in the National Review following the healthcare vote, former Massachusetts governor Mitt Romney wrote that the “health-care bill is unhealthy for America. It raises taxes, slashes the more private side of Medicare, installs price controls, and puts a new federal bureaucracy in charge of health care. It will create a new entitlement even as the ones we already have are bankrupt. For these reasons and more, the act should be repealed. That campaign begins today.” At least 39 states have prepared legislation to allow its citizens to “opt-out” of paying for healthcare. At the same time, the government and its supporters are pressing ahead with its implementation.

What will this division do to the nation?

America’s government has long valued a spirit of bipartisanship. Members of its two main parties, Democrats and Republicans, would regularly set aside their political differences and work together on projects deemed to be in the national interest.

But the spirit of bipartisanship is rapidly dying. On almost every matter, there is bitter division between Democrats and Republicans—with each holding their ground—quickly becoming implacable foes. In this poisoned atmosphere, long-time members of the House of the Representatives and the Senate as well as political analysts are concerned about the unprecedented lack of cooperation.

“In terms of partisan conﬂict, we’ve never really seen anything like this and it’s really shocking for a country that by and large has hung its hat on moderation—compromise between conservatives and liberals,” Marc Hetherington, a professor of political science at Vanderbilt University said in an interview with Maclean’s. “If you take a look at data in terms of the divisions between Republicans and Democrats specifically, you’d have to go back to Reconstruction in the 20 or 30 years after the Civil War.”

This accusative spirit is infecting the country. During the healthcare debate, opponents of the measure repeatedly accused the government of possessing and executing an agenda that does not take into account the interests of the nation. This prompted the government to respond that it is actually the opposition that is forcing its own political ideology.

More and more, Congress seems to be firmly split down party lines on every issue.

From the country’s formative years, when Americans fought for independence from Britain, they have treasured the values of initiative, innovation, self-reliance, risk-taking and hard work. Government was necessary largely to protect its citizens and ensure that law and order prevailed. Many believed, and still do, that its involvement in the economy—and in the lives of citizens—should be minimal.

“Two-thirds of Americans are ‘dissatisfied’ or downright ‘angry’ about the way the federal government is working, according to a new Washington Post-ABC News poll. On average, the public estimates that 53 cents of every tax dollar they send to Washington is ‘wasted’” (The Washington Post).

The article continued, “Overall, two-thirds of all those polled are dissatisfied with or angry about the way the government works, the highest number to say so in periodic polling since March 1996. Eight in 10 conservative Republicans hold negative views about the way government works, but by contrast, 59 percent of liberal Democrats said they were ‘enthusiastic’ or ‘satisfied’ about the role government was playing” (ibid.).

Americans cannot seem to agree on anything, whether it is morality, history, culture, politics or how to address national issues. Other contentious arguments are raging over immigration reform, “cap and trade,” energy policy, student loans, abortion and the wars in Iraq and Afghanistan.

In the current contentious environment, both sides often comment about God. National leaders regularly speak about their “faith” and frequently throw in a “God bless America” at the end of speeches. At the same time, the contents of their talks are usually laced with venomous comments about the opposition party.

Additionally, a large section of the voting population will demand that America must recapture its Judeo-Christian roots. But the citizenry is divided. The opposing camp wants nothing to do with religion, thinking that through human reasoning, we can survive our troubles and prosper.

Similarly, “Can two walk together, except they be agreed?” (Amos 3:3).

The answer is a resounding NO. A nation of division, backbiting, infighting and vehement partisanship cannot stand!

Rarer still is the person who asks what side God would take in polarized America. However surprising, God is neither right-wing nor left-wing, nor is He interested in taking political sides. What God is interested in is obedience to His laws. In this, America is failing. Adultery, fornication, lying, cheating, stealing, murder, violence and strife are epidemic throughout the country—among conservatives and liberals alike.

Realize. Every problem in America stems directly from disobedience to divine Law!

Yet to the obedient nation God promises peace and abundance. “If you walk in My statutes, and keep My commandments, and do them; then I will give you rain in due season, and the land shall yield her increase, and the trees of the field shall yield their fruit…And I will give you peace” (Lev. 26:3-4, 6).

A nation in harmony with God’s Law will be at peace. Without it, a country cannot stand.

For a clearer picture of where America is headed, read David C. Pack’s book America and Britain in Prophecy.