This website requires the use of Javascript to function correctly. Performance and usage will suffer if it remains disabled.
How to Enable Javascript
The Haiti Earthquake — Why Did God Allow This?

The Haiti Earthquake — Why Did God Allow This?

Philosophers, theologians and religious leaders have never been able to understand the reason behind human suffering, but there is an answer. 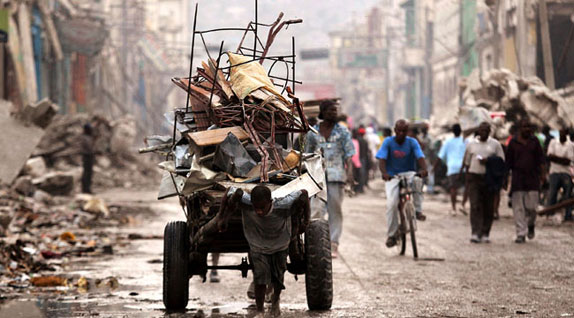 Thirty-five seconds. In just over half a minute, a 7.0-magnitude earthquake levels much of Haiti. Its capital, Port-au-Prince, is demolished. Homes, schools, hospitals, churches topple, crushing most everyone inside.

Minutes pass. Shocked and bloodied survivors swarm the streets. Shrieks of panic echo through the dust. Dazed, some slowly realize loved ones did not get out in time. Some do escape, but with crushed arms and mangled legs.

Days pass. A young girl screams as a nurse trainee amputates her hand—without anesthesia. There is little aid. Corpses float among litter and debris in a river. The dead are burned in the street, along with garbage. Thousands of lifeless bodies—a tangle of arms, legs and torsos locked together in rigor mortis—dumped in mass graves.

Roberto Schmidt/AFP/Getty Images
A woman carries a basket on her head in a tent city in the nation’s capital (Jan. 25, 2010). An estimated three million Haitians were left homeless or injured by the earthquake. 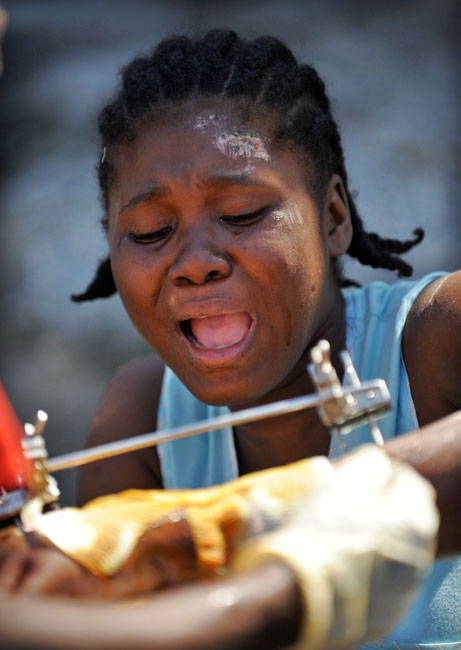 Sophia Paris/Minustah/AFP/Getty Images
An injured woman cries in pain as she is treated at a makeshift hospital in Port-au-Prince (Jan. 21, 2010).

Thirty-five seconds. Just 35 seconds began some of the most heart-rending suffering in decades.

Religious leaders struggled to offer words of comfort to those shocked by the devastation.

“I have nothing to say that makes sense of this horror,” Britain’s Archbishop of York said, “all I know is that the message of the death and resurrection of Jesus is that he is with us” (BBC).

Other religious figures attempted to put meaning behind the events in the ruined nation.

A Haitian Pentecostal pastor used the tragedy as a teaching point: “When God speaks we must listen,” he said. “The earthquake is God’s voice and He will do other things. The stars will crash down onto the earth” (Guardian).

A famous American televangelist said the disaster was vengeance due to a 200-year-old “pact with the devil.” Other professing Christians believe God’s hand could be involved because the country is steeped in Voodoo.

Philosophers argue that “God allows suffering to prompt people to be good” or that “if God were to intervene, He would deny free will.”

Churchgoers, on the other hand, simply remark, “God works in mysterious ways,” or say that the catastrophe allows them to “extend God’s love to survivors.”

In the end, Haiti seems inexplicable.

One question looms: how can a God of love allow such suffering?

Haiti has long been a powder keg of troubles ready to explode. Before the quake, the average person lived on $2.30 USD per day. Eighty percent lived below the poverty line, with 54 percent in abject poverty.

The massive quake was another blow to the poorest nation in the Americas, which has been wracked with government instability and frequent natural disasters—forcing it to become almost completely dependent on foreign aid.

The nation has suffered tragedy after tragedy. After winning independence from France and freedom from slavery in 1804, a bright new chapter seemed to open up for the island. Yet from 1804 to 1915, the nation cycled through more than 70 different dictators. This was followed by a stream of democratically elected leaders turned self-appointed “presidents for life,” who were then chased out by military coups and terrorism—years of turmoil at the expense of Haiti’s citizens.

Since then, the nation has suffered even more election troubles, violent gang wars, and a barrage of devastating natural disasters. In 2008, four hurricanes—Fay, Gustav, Hanna, and Ike—pummeled the nation in less than a month, killing 800 people. The hurricanes destroyed about 60 percent of the nation’s harvest and rendered entire cities uninhabitable.

After the four storms, Port-au-Prince Mayor Jean-Yves Jason estimated that 60 percent of the buildings in the city were unsafe due to hurricane-weakened foundations (AP).

On top of that, “The metropolitan area is home to two million people in an area originally planned for 200,000. Houses are poorly constructed with lax codes, if any” (The Haitian Times).

How can nations of the world allow this country to continue to struggle?

For 200 years, Haiti has been seemingly trapped in a cycle of futility. In spite of continued outside efforts—billions of dollars of aid, debt-forgiveness, foreign peacekeeping forces—Haiti remains a completely destitute nation.

But it is not just Haiti. History shows humanity has always been plagued, to one degree or another, by the same problems. The record of man is rife with disease, war, dictators, famine—with never any true improvement.

Why does God allow civilization to flounder?

Joe Raedle/Getty Images
Hungry masses: A police officer tries to push back a frenzied crowd waiting for food handouts outside a police station in Cite Soleil in Haiti (Jan. 26, 2010).

Chris Hondros/Getty Images
Trapped for days: A 28-year-old woman lies pinned under the rubble of her house for days in Port-au-Prince, Haiti. After working for hours to free her, emergency workers had to amputate one leg to remove her from the debris (Jan. 15, 2010).

Most misunderstand God’s reason for creating mankind. Central to God’s Plan is the purpose of building His holy, righteous character in people, so that one day they can be part of the God Family, and become sons of God in His soon-coming, eternal kingdom!

A key element in this plan for humanity is time. Imagine if God had demanded that people live His way. Mankind would have fought against Him and accused Him of being unfair. This is the reason God gave humans free will.

After Adam and Eve chose to reject instruction, God stepped back and allowed lesson learning to begin.

Throughout history, mankind has called the shots. The results? War. Famine. Disease. Crumbling nations. Destitute peoples. Hatred. Murder. These are the ways of man.

God cannot instill His character into people by divine fiat. Only through experience can mankind see that its own ways always bring more and worse suffering. On the other hand, God’s ways produce peace and happiness.

At the end of mankind’s chance to try things its way, all humanity will finally be able to look back and see that their governments and religious systems failed! It is at this time that all of the suffering will come into perspective.

But in the wake of disasters such as Haiti, it seems hard to keep in mind these reasons behind the untold suffering and how it fits into God’s Plan.

People ask, Why did God allow so many to die?

God hates senseless suffering. He sees a dead father and his infant son lying side-by-side a week after an earthquake, a woman with her hands raised to the sky mourning the loss of her husband who was buried under the rubble of a collapsed building, a family of five subsisting on a bottle of water and cup of rice in a tent city. He hears the cries of His potential children and it pains Him, as it would any father. He is “not willing that any should perish” (II Pet. 3:9) and would “have all men to be saved” (I Tim. 2:4).

All men means all men! Everyone will be offered salvation, including those who died in the Haiti tragedy. We can take comfort that God is working out His Plan here on Earth.

Speaking to His disciples, Jesus outlined the world conditions that would be present just before His coming to usher in the kingdom of God.

“Tell us, when shall these things be? And what shall be the sign of Your coming, and of the end of the world?”

“And Jesus answered and said unto them, Take heed that no man deceive you. For many shall come in My name, saying, I am Christ; and shall deceive many. And you shall hear of wars and rumors of wars: see that you be not troubled: for all these things must come to pass, but the end is not yet.

“For nation shall rise against nation, and kingdom against kingdom: and there shall be famines, and pestilences, and earthquakes, in diverse places” (Matt. 24:3-7).

Those who do heed these words can take comfort that “when you see these things come to pass, know you that the kingdom of God is nigh at hand” (Luke 21:31).

This time is fast approaching. World events prove that this chapter of God’s Plan is nearing its close. Although it may seem difficult to understand now, with God’s kingdom established, mankind will finally be able to see the purpose for suffering. A time when “God shall wipe away all tears from their eyes; and there shall be no more death, neither sorrow, nor crying, neither shall there be any more pain: for the former things are passed away” (Rev. 21:4).

Read David C. Pack’s Tomorrow’s Wonderful World – An Inside View! to understand the time when all men can be saved—and sorrow, such as Haiti’s, will cease.