This website requires the use of Javascript to function correctly. Performance and usage will suffer if it remains disabled.
How to Enable Javascript
Swine Flu: Behind the Pandemic of Fear

Swine Flu: Behind the Pandemic of Fear

Nations worry: “Will it strike us next?” Governments shut down schools, businesses and public facilities; some ban meat imports and impose travel restrictions. Citizens wear surgical masks when walking crowded streets and using mass transit. The world is nervous—billions wonder, “What happens next?”

Mark Ralston/AFP/Getty Images
An Asian family wears face masks to protect themselves from the risk of contracting swine flu, as they arrive at Los Angeles International Airport (April 29, 2009).

A cough, a runny nose, fatigue become a fever, leading to extreme illness—and for some people, death.

Concern turns into worry, which gives way to fear, which morphs into panic.

As cases of a previously unseen—and sometimes deadly—strain of swine flu cross the border from Mexico into the United States and beyond, fear of a worldwide pandemic sweeps the nations. Health officials, government leaders and average citizens wonder if this could be a repeat of the 1918-19 Spanish flu pandemic, which infected up to 500 million people and caused as many as 50 million deaths.

According to a study from the University of Southern California, news and information today are delivered so fast and so frequently, via news websites, social networking, blogs, etc., that people do not have time to process the emotional impact of what they have read—leading them to feel indifferent to human suffering. Reports such as 5,200 people dying in a flash storm in some faraway country, or UN peacekeepers discovering 250 rotting corpses in a remote, war-ravaged region, become blurred. “After all,” the mind reasons, “it didn’t happen here.”

But the new swine flu outbreak is different. What happened “over there” is now “here”—leaving many to wonder, “Could I be next?”

The World Health Organization (WHO) states that this new strain of swine influenza A/H1N1 virus, which contains a never-before-seen combination of pig, bird and human genes, initially struck people who had prolonged, close contact with infected pigs.

The Wall Street Journal reported that when the Centers for Disease Control and Prevention (CDC) did preliminary testing on samples from 14 patients from Mexico, seven samples appeared to match the strain circulating in the United States.

Unlike other viruses that have taken the lives of the very young, weak and elderly, this particular strain has primarily killed people ages 25 to 45.

The Mexican government shut down schools, museums, movie theaters, stadiums, libraries and eateries in Mexico City and surrounding areas until further notice. Local citizens now wear surgical masks when in public and Mexico has made available a million doses of antiviral medicine.

Local governments in the United States have also closed schools and other public facilities as cases of swine flu continue to appear on the scene.

U.S. President Barack Obama addressed the public, attempting to put fears to rest. He stated, “This is obviously a cause for concern and requires a heightened state of alert,” and assured that the situation was “not a cause for alarm” (NBC News).

Yet alarm is spreading, as the virus spreads to Scotland, France, Spain, Germany, Austria, Israel, New Zealand and other countries.

A bar manager in Mexico City said of reaction to the outbreak, “It’s a panic, a psychosis, and it’s hurting the country economically” (USAToday). 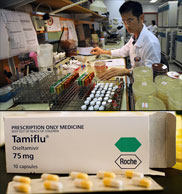 In Mexico, one taxi cab driver said his business has dropped by 50 percent since the flu hit. “People don’t even want to leave their houses. It was bad enough with the economic situation, and now it’s even worse” (Bloomberg).

The epidemic, which claimed at least 10 lives in the first week it gained worldwide media attention, threatens to push the nation’s already struggling economy past its breaking point, during a time when the number of U.S. imports from Mexico is decreasing. “The Mexican economy shrank 1.6 percent in the fourth quarter and probably contracted another 4.2 percent in the first three months of this year, according to a central bank survey of 32 economists published April 1” (ibid.).

In New York City, Mayor Michael Bloomberg said that while the number of hospital visits in New York has increased, the number of cases has not. He commented that there are more people worried about the virus than there are actual cases.

“‘Tourism is one of the first things impacted; it is a fragile industry, because people get scared,’ says Hailin Qu, director of the Center for Hospitality and Tourism Research at Oklahoma State University. He says that tourism industries in Asian nations impacted by SARS took between one and two years to rebound” (Christian Science Monitor).

Elsewhere, Russia declared it would ban raw and cooked meat products from Mexico and some U.S. states, and a top European Union health official urged Europeans to forgo nonessential travel to parts of the United States and Mexico.

United Nations Secretary-General Ban Ki Moon stated, “We are concerned that this virus could cause a new influenza pandemic. It could be mild in its effect or potentially be severe” (AFP). He also said, “We don’t know yet which way it will go but we are concerned that in Mexico most of those who died were young and healthy adults.”

In Germany, Health Minister Ulla Schmidt detailed a 100-page contingency flu plan, which she described as “the script of a disaster movie” (Der Spiegel). “The plan assumes that a full-blown outbreak of a flu such as swine flu could cause up to 103,000 deaths in Germany alone within eight weeks, with 13 million people visiting doctors and 370,000 being referred to hospitals. Around 30 percent of the population would be infected, the report estimates.”

The German plan maintains that it would take three months or more to develop a vaccine that could immunize the entire population. “Essential staff needed for maintaining public order would be first in line to be vaccinated—doctors and nurses, police, fire brigade, army and officials and members of crisis management teams” (ibid.).

A pandemic of fear is evident, leading several countries to install travel security measures, even travel bans, and numerous travel companies to suspend services to Mexico.

Japan said it would no longer issue Mexican travelers visas upon entering the country, and health officials have been patrolling Japan’s airports, checking passengers arriving from Mexico, the U.S. and Canada. The health minister said that those suspected of having the virus would be quarantined (The New York Times).

Elsewhere, Asian countries such as China, Hong Kong and Taiwan are checking airline passengers, and Indonesia has banned all pork products from Canada, the U.S. and Mexico. However, Indonesian Health Minister Siti Fadilla Supari said the government “would not issue any travel warning to prevent Indonesians from going to countries where swine flu has been detected” (The Jakarta Post).

The British Foreign and Commonwealth Office warned on its website “against all but essential travel to Mexico.” Canada has done the same.

India’s government said that passengers entering from “affected countries will be scanned daily for flu-like symptoms, while efforts are on to track people who have already entered from infected countries over the past 10 days” (Bharat Chronicle). 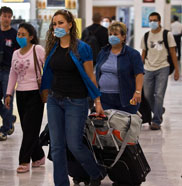 Meanwhile, U.S. airports have taken action. Los Angeles International Airport and LA/Ontario International installed close to 200 dispensers of hand sanitizer on the walls and counters in the customs arrival halls in five international terminals, three of which receive passengers from Mexico. Sacramento International, with masks at the ready, has urged custodial staff to wear them when cleaning in the international section of the airport, and it is increasing the number of times it changes air filters. In Texas, officials at the Austin-Bergstrom International changed the terminal where incoming flights from Mexico normally land, to a smaller, secondary terminal several hundred yards away.

Some U.S., Canadian and Mexican airlines have posted notices waiving change fees for passengers traveling on flights to and from Mexico.

Reacting to the WHO raising its alert to Phase 5—one step short of declaring a global pandemic—Egypt’s government ordered a nationwide slaughter of its estimated 300,000 pigs, before the virus was even discovered in the country.

While cause for concern is understandable, health officials and government leaders warn the public to remain calm. The WHO recommends avoiding people who appear ill, are feverish and have a cough; to frequently and thoroughly wash hands with soap and water; and to practice good health habits (sufficient sleep, consuming nutritious foods, and regular physical exercise).

What fuels this global pandemic of fear? Why does it exist? Where will it lead?

The world is changing. The times are insecure. In an age of 24/7 news, instant information, and mass communication and travel, the world—now a truly globalized “village”—is smaller, an ocean that is now a lake, with greater rippling effects reaching every continent.

Since the start of the 21st century, humanity wakes up every new morning never knowing what to expect. Terrorists topple New York’s Twin Towers, America’s symbol of wealth and financial stability—oil prices soar, doubling, even tripling, then dropping (until another price cycle begins)—a hurricane renders a U.S. destination spot into a citywide refugee camp—a worldwide economic crisis shuts down banks, businesses, even governments, and everyday workers lose their retirement, their jobs, their homes…their direction.

From the ashes of World War II, America rose to become a superpower, a kind of knight in shining armor, a hero grown accustomed to being adored by lesser nations. Today, the international community sees America as a lone wolf vigilante—a necessary evil to be tolerated, humored, but also despised.

Rogue nations no longer fear standing up to Washington. While America promotes democracy—government in which the people rule—in lands where the rule of strong men has long been the norm, the rise of China causes many to take notice: “Communism plus capitalism actually works?”

And then there is the powerlessness of man’s religions. Despite public professions of devotion to God and faithfulness to tradition, injustices, out-of-control diseases, ongoing civil wars, and nightmarish atrocities still exist—in fact, they are burgeoning. Many ask, “Where is God?”

Governments see that the United States has passed its prime, slipping down from its status of superpower. Nations are ripe for a new power—a counterweight—to step in. A government that will bring stability to these unstable times, that will calm the masses through strength of will (and, if necessary, by show of force).

The pandemic of fear now spreading from nation to nation is symptomatic of a world in which shattering, life-changing events strike daily—events that prompt mankind to ask, “Where are we headed?”