This website requires the use of Javascript to function correctly. Performance and usage will suffer if it remains disabled.
How to Enable Javascript
STDs: Immorality’s Plague

Reported cases of sexually transmitted diseases in America are at an all-time high. Preventive measures are not working. Can anything be done to curb the problem? 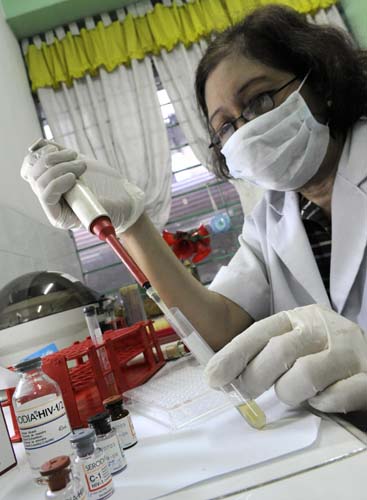 When the United States government published its statistics for sexually transmitted diseases in 2006, the numbers were shocking. Chlamydia had topped one million newly reported cases for the first time. Syphilis cases jumped 14 percent over the previous year. And a new drug-resistant strain of gonorrhea plagued the nation.

The record was topped again for 2007. Nearly 1.5 million Americans reported new cases of chlamydia and syphilis.

However, according to the Centers for Disease Control (CDC), most cases go undiagnosed, with the actual number of chlamydia cases likely near 3 million a year. Syphilis cases went up 15 percent from 2006 to 2007.

Officials at the CDC said the increase was partly due to better testing methods. Still, the new stats reveal a growing and pervasive health trend.

The CDC describes one way to dramatically reduce the spread of STDs: “The most reliable ways to avoid transmission of sexually transmitted diseases (STDs), including human immunodeficiency virus (HIV), are to abstain from sexual activity or to be in a long-term mutually monogamous relationship with an unaffected partner.”

But this solution does not mesh with modern society. Labeled a holdover from archaic religious notions, the solution is often discarded.

Instead, to keep up with today’s relative sexual norm, governments, health specialists, individuals, and America as a whole, seek other ways to combat the STD scourge.

For years, education has been seen as one way to curb the growing problem of STDs. A major forum for this is high school health classes. Sexual education teachers arm students with information regarding the dangers of sexually transmitted diseases. Some school systems teach abstinence, while others advocate “safe sex” and condom use.

Studies suggest that having chlamydia, gonorrhea or syphilis increases the risk of HIV transmission.

• Chlamydia: The most commonly reported infectious disease in the United States; a bacterial infection easily cured with antibiotics; it often does not have visible symptoms. For young men, untreated chlamydia generally does not present complications, but 40 percent of women who do not treat the disease will develop pelvic inflammatory disease—a condition that causes 50,000 U.S. women to become infertile each year.

• Gonorrhea: Also easily cured, but if left untreated, can lead to infertility in women. In men, gonorrhea can cause epididymitis, a painful infection in the tissue around the testicles that can cause sterility.

• Syphilis: Causes sores on the infected area, usually genitalia; highly infectious and easily treated in its early stages. If untreated, it can lead to brain, cardiovascular and organ damage, and even death. In pregnant women, if untreated, syphilis can be spread to the infant—causing stillbirth, death shortly after birth, physical deformity and neurological complications.

• Herpes: Causes a reoccurring viral outbreak of blisters, generally occurring on the genitals or rectum. The blisters will usually turn into sores that may take two to four weeks to heal. The viral infection can remain in the body indefinitely, but outbreaks are usually less frequent with subsequent years.

However, whatever the curriculum, it appears classes do little to prevent the spread of STDs; nearly half of the 19 million newly reported infections each year are among 15–20-year-olds.

According to a CDC study of over 3 million teenage girls, one in four has a sexually transmitted infection. Among the girls in the study who admitted to having sex, the rate was 40 percent.

And the problem continues with adults, who constitute the rest of the 19 million new infections per year.

Syphilis cases are up over 80 percent since 2000. A person with syphilis has about a 40 percent chance of having HIV or AIDS. In 2007, 65 percent of reported syphilis cases were among homosexual and bisexual men.

Drug-resistant gonorrhea is another growing threat. Among heterosexual men, cases of the drug-resistant strain increased 6.7 percent in 2006, compared to 0.6 percent in 2001. Doctors have only one class of antibiotics that can fight the strain.

Most sexually transmitted diseases are asymptomatic—meaning that unless a person is tested, he does not know he is infected. It is possible for one to unknowingly spread STDs, not realizing he is infected.

The CDC recommends one STD screening per year for those who are sexually active.

The solutions put forward are often as telling as the statistics of STD prevalence. The response to the epidemic reveals much about societal attitudes toward the problem.

One website allows users who have tested positive for an STD to send email alerts to sexual partners. The messages are sent in glibly worded “e-cards.” One says, “Who? What? Where? When? How? Doesn’t matter I’ve got an STD; you might have one too.”

Another reads, “It’s not what you brought to the party, it’s what you left with. I left with an STD. You might have too.”

The cards then provide information for a nearby STD clinic.

Once a sexually transmitted disease is diagnosed, it usually can be treated or the symptoms suppressed. However, many do not want to be tested or treated because of the stigma attached to STDs.

In a genital herpes television commercial, numerous characters representing all walks of life proclaim, “I have genital herpes,” while upbeat music plays in the background. A voiceover reads the description of the drug and its treatment, while people are doing yoga, sitting with their loved ones—leading visibly healthy lives.

However, the advertised medication can only reduce the symptoms of genital herpes. The best it can do is decrease symptoms and outbreaks—not remove the STD itself.

There has also been a recent push to vaccinate young girls to help prevent the development of cervical cancer.

One television commercial, aired in Britain, shows a girl in her early teens getting out of bed and going through the routine of her day: eating toast for breakfast, riding the bus, raising her hand in class, getting her vaccine against human papillomavirus (HPV), texting her friends. The commercial states that HPV can develop into cervical cancer.

An American ad for a similar vaccine has young females saying they will not be victims of cervical cancer. The fine print tells viewers that the vaccine can be administered to 9- to 26-year-old women and may prevent up to four types of HPV, the cause of 70 percent of cervical cancer.

What the commercials do not say is that HPV is a sexually transmitted disease.

Girls as young as nine can be administered this vaccine, which is seen as a preemptive approach to both a common STD and cancer risk. But the medication only fights cervical cancer caused by HPV.

The U.S. government also is working to reverse the growing STD trend. On Jan. 28, 2009, Congress passed a near-trillion dollar economic stimulus package. Page 147 of the bill dictates “not less than $335,000,000 shall be used as an additional amount to carry out domestic HIV/AIDS, viral hepatitis, sexually-transmitted diseases, and tuberculosis prevention programs as jointly determined by the Secretary and the Director.”

For many, the “most reliable” solution proposed by the CDC—a monogamous relationship—appears to have overtly religious tones: that sex should only be within marriage between a man and woman.

This seems incompatible with the permissiveness of modern society. For some, the notion may even bring to mind childhood Sunday school memory verses such as “Thou shall not commit adultery” (Ex. 20:14).

Millions see God as Someone who constantly thunders, “Thou shall not!” They see a fiery Old Testament God who, after delivering His Law to Israel, warned that if they did not obey, disease would result.

“If you are not careful to do all the words of this law which are written in this book, that you may fear this glorious and awful name, the Lord your God, then the Lord will bring on you and your offspring extraordinary afflictions, afflictions severe and lasting, and sicknesses grievous and lasting. Every sickness also, and every affliction which is not recorded in the book of this law, the Lord will bring upon you, until you are destroyed” (Deut. 28:58-59, 61 – Revised Standard Version).

However, when God says that disobeying His Law will bring “severe” and “grievous” afflictions, He is acting as a loving Parent, much like telling a child not to touch a hot stove.

Often, the laws in the Bible involve physical side effects. If God’s laws are kept, the side effects are good; if broken, they are bad. If you remain within God’s Law—which includes to “flee fornication” (I Cor. 6:18) and to “not commit adultery”—you will not be as susceptible to the spreading STD scourge.

The CDC says something somewhat similar by stating that the best option to avoid sexually transmitted infections is to abstain from sex or only practice it within a “long-term monogamous relationship.” This is the only way to get to the cause of rampantly spreading STDs—stop being promiscuous.

But why does America refuse to listen to the solution that most readily addresses the cause of sexually transmitted diseases?

For thousands of years, human beings have decided for themselves right from wrong. Each scientific advancement and philosophical development has been seen as “good” and “right”—but many brought negative side effects.

This has been the way of humanity throughout the centuries. “There is a way which seems right unto a man, but the end thereof [are] the ways of death” (Prov. 14:12).

Since World War II—since the discovery of antibiotics—since the controversial Kinsey Reports, and the sexual revolution of the 1960s, and onward—man has repeatedly redefined sexual morality.

Each step of the way, man has felt he was progressing toward a better society. Few feel that each decision rendered by human reasoning leads to unhappiness, disease, misery and—ultimately—death. Each successive generation worsens, not realizing the effects of its decisions and “progressive” ideas. Each generation accepts a new “normal” and cannot see its own dire conditions.

But rather than seeking to address the causes of problems, man focuses on finding ways to address the symptoms alone—the effects. Humanity uses science to support the sex-driven society to which it has become accustomed.

Realize that the breaking of God’s laws is breaking mankind! Disobedience—following what feels good or “seems right unto a man”—brings these plights on society.

Conversely, obedience to God’s physical health laws, which dovetail with scientific fact, will “keep” you. These laws are not designed to burden human beings with a life of “thou shall not’s”—but rather, God’s Law brings joy (Psa. 1:1-2), success, and an abundant, healthy life.