This website requires the use of Javascript to function correctly. Performance and usage will suffer if it remains disabled.
How to Enable Javascript
Corruption at the Top

Corruption at the Top

Corruption is increasingly blatant and growing in both scope and frequency, even among wealthy democracies of the industrialized world. Will this come to an end? 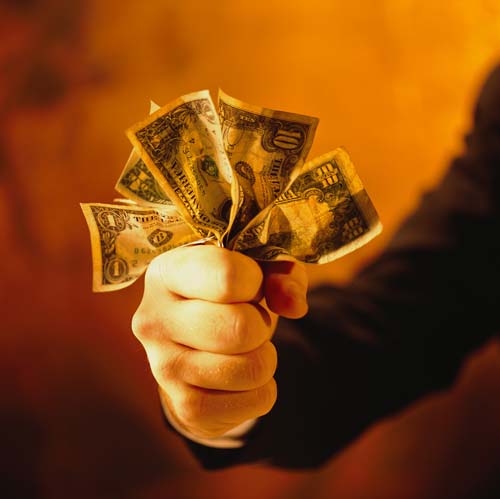 The governor of a Midwestern state was impeached for allegedly soliciting bribes in exchange for a seat in the Senate.

The mayor of a city in the American South was charged with giving away millions of dollars in bond work for $230,000 as part of his former job as a county commissioner.

And a wide-ranging investigation in a county government resulted in at least two public officials being investigated for possibly accepting gifts in exchange for county jobs and contracts.

One might think that during such challenging times as the on-going War on Terror and the current financial crisis, society in general, including lawmakers, would be able to exercise integrity in their personal and political responsibilities.

The media focuses on the tantalizing details of each scandal, with little analysis of the social implications. But the public response is borderline non-existent. It is almost as if society has become jaded, accepting corruption as commonplace. Should it be?

Also telling are the often unapologetic and defiant attitudes of those accused. No doubt, they could be innocent. However, many do not show a willingness to cooperate or even a touch of humility.

The lust for power and money has existed since the beginning of mankind. Not long after the first groups of families formed villages, corruption among leaders, or “politicians,” was evident.

Lust is a basic expression of human nature. Man often slides toward the easy way to accomplish a goal. King Solomon, the wisest man who ever lived, wrote, “There is a way which seems right to a man, but the end of it are the ways of death” (Prov. 14:12; 16:25).

History is rife with examples of corruption. One of the first is found in the Bible. Referring to the time of Noah, just before the flood, Genesis 6:11 states, “The earth also was corrupt [in decay, ruined, destroyed] before God.”

The corruption was so great that in verse 5 it says, “And God saw that the wickedness of man was great in the earth, and that every imagination of the thoughts of his heart was only evil continually.”

Much of history connects corruption with the decline of a civilization. For example, the Encyclopaedia Britannica states that during the 16th century, a split in priority and loyalty among various classes in the Ottoman empire led to “corruption and nepotism…at all levels of administration” and that “accession and appointments to positions came less as the result of ability than as a consequence of the political maneuverings…”

In an effort to maintain their power, politicians of the time relied on acts of convenience as opposed to traditions and principles. The result was “a growing paralysis of administration throughout the empire, increasing anarchy and misrule, and the fracture of society into discrete and increasingly hostile communities” (ibid.).

Corruption is also associated with alliances and war. One example is the U.S. relationship with Thailand following World War II. During the 1950s, the U.S. poured huge amounts of economic and military aid into Thailand as part of their strategy to contain communism.

Economically, this meant steady growth for Thailand until the 1990s. Socially and politically, however, the control and allocation of the aid led to significant corruption. Monarchs were assassinated, military rulers allied with police to suppress political opposition, and army chiefs sat on boards of numerous corporations—all while being responsible for distributing U.S. aid.

Tensions led to a coup in 1957, and the eventual return of the monarch years later. Increased U.S. aid during the Vietnam War stimulated continued economic development, “contributing substantially to the growth of corruption and a rising gap in the standard of living between rich and poor” (Encyclopaedia Britannica). Public disaffection toward the war and the U.S.-influenced monarch grew, eventually resulting in outright insurgency and a revolution in 1973.

Following Illinois Governor Rod Blagojevich’s arrest, John Caniglia of The (Cleveland) Plain Dealer wrote that political dishonesty is part of a national trend, referring also to cases involving the mayor of Birmingham, Ala., a Cleveland, Ohio city councilman and a Massachusetts State Senator.

“‘It has become so pervasive in our society,’ said Catherine Turcer of Ohio Citizen Action, a public watchdog group. ‘It almost begs a question: Is it so much worse or are so many more people getting caught? The more we hear about it, the less we trust government.’”

The article goes on to state that there are dozens of corruption cases sprouting up across the country this year, “damaging public confidence, hindering government and distracting people from bigger, more pressing issues.”

In The Wall Street Journal, L. Brent Bozell III suggested that several of the country’s main media outlets were treating the Illinois governor case with undue obscurity in an attempt to protect the Democratic Party, and the image of the newly elected president.

Also tied to political corruption is the issue of fundraising. In a townhall.com piece, Paul Jacob said society overlooks the central issue. “It’s not that Illinois is especially corrupt. It’s that power tends to corrupt and every governor faces temptation. Many succumb.”

Mr. Jacob stated that many, if not most, push the envelope as far as they can in regard to “legal fundraising.”

“Americans outside Illinois have no reason to gloat. The fact that their governors haven’t been arrested does not mean their governors are not also dirty. Just, perhaps, more clever.”

The situation is similar in other Western countries. Canada, for example, currently has a Conservative Prime Minister, in part due to the once-dominant Liberal Party’s involvement in an elaborate “sponsorship” (i.e., vote-buying) scandal. Auditor General Sheila Fraser’s report in 2004 stated that, “$100 million was paid to a variety of communications agencies…and said the program was basically designed to generate commissions for these companies rather than to produce any benefit for Canadians” (CBC). In the end, the Prime Minister fired the heads of three Crown corporations (state-controlled companies), several executives were found guilty of fraud, and the ruling Liberals were forced out of government.

Israeli Prime Minister Ehud Olmert was also the subject of several corruption scandals, which forced his resignation. The two major cases involve suspicions that he took bribes from a New York financier and another in which political funds and expenses were mishandled regarding personal travel during his time as Trade Minister and Mayor of Jerusalem.

One might think that mankind should have gotten it right by now—so why, then, the continued corruption?

We are nearing the end of 6,000 years of mankind trying to live life its own way, as opposed to God’s way. Educational, judicial and governmental systems are all under the influence of Satan, who bombards mankind with attitudes of vanity, lust and greed.

Notice Isaiah 59, describing the worldwide corruption that exists today: “None calls for justice, nor any pleads for truth: they trust in vanity, and speak lies; they conceive mischief [evil], and bring forth iniquity…there is no judgment [justice] in their goings: they have made them crooked paths…Therefore is judgment far from us, neither does justice overtake us: we wait for light, but behold obscurity; for brightness, but we walk in darkness…And judgment [justice] is turned away backward, and justice [righteousness] stands afar off: for truth is fallen in the street, and equity cannot enter. Yes, truth fails; and he that departs from evil makes himself a prey: and the Lord saw it, and it displeased Him that there was no judgment [justice] (vs. 4, 8-9, 14-15).”

One reason why society “accepts” corrupt politicians is that they are not that much different themselves. They see corruption in their own lives, and as such cannot, like the men who brought an adulteress to Jesus in John 8:1-11, cast any stones.

Many Western nations were founded on principles derived from the Bible. However, their citizens have long forgotten them, and now wallow in the mire as what remains of the blessings that God once promised to Abraham disappear.

As the age grows more bleak, society, including politicians, will become more desperate and degenerate. Corruption will become increasingly unchecked.

In his booklet Are These the Last Days?, David C. Pack wrote, “Consider [Paul’s] prophecy of the widespread degeneration of attitudes and character, just prior to Christ’s Second Coming. He wrote, ‘This know also, that in the last days perilous times shall come. For men shall be lovers of their own selves, covetous, boasters, proud, blasphemers, disobedient to parents, unthankful, unholy, without natural affection, trucebreakers, false accusers, incontinent, fierce, despisers of those that are good, traitors, heady, highminded, lovers of pleasures more than lovers of God; having a form of godliness but denying the power thereof: from such turn away’ (II Tim. 3:1-6).

“This is a powerful prophecy describing the complete breakdown of character in ‘the last days.’ This time has come!—and these widespread conditions grow worse daily! Look around. People’s conduct is rapidly changing—seemingly always for the worse. More educators and others in authority are sounding the alarm that conditions have exploded out of control!

“Who can doubt this trend?”

But the good news is that a time is soon coming when a single government will replace all the governments of this world. Ruled by Jesus Christ (Isa. 9:6-7), it will be completely free of corruption. Read our book Tomorrow’s Wonderful World – An Inside View! to learn more.