This website requires the use of Javascript to function correctly. Performance and usage will suffer if it remains disabled.
How to Enable Javascript
India and Pakistan: An Uncertain Future

India and Pakistan: An Uncertain Future

With relations strained between rival nuclear powers, what does the future hold? 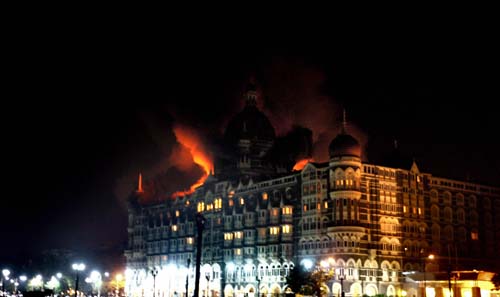 Pal Pillai/AFP/Getty Images
Coordinated attacks: Fire engulfs the top floor of the Taj Mahal hotel, site of one of the shootouts with terrorists in Mumbai, on late Nov. 26, 2008.

India and Pakistan have been locked in a bitter rivalry with decades-old roots that have almost erupted into outright war several times. In a contentious post-9/11 world, the threat is even greater as the conflict has, on multiple occasions, threatened to escalate into nuclear war.

However, as a year full of international tension and military maneuvering between India and Pakistan came to a close, there was a glimmer of hope. The two countries signed a landmark accord agreeing to cooperate on military matters. Although made between two non-official organizations, it was the first time the adversaries had worked together in such a manner. The accord outlined a plan to share limited military and security information between India’s Institute of Defense Studies and Analysis and Pakistan’s Institute for Strategic Studies.

Why such deep-seated animosity between these nuclear rivals? What does the future hold for them? Will the recently signed security pact be the first step toward lasting peace in the region?

To understand the current state of affairs, let’s examine Indian and Pakistani history.

The close of the British Empire’s colonial era on the subcontinent of India began with the formation of the self-governing colony of Burma (today Myanmar) in 1937. A decade later, in the face of the quickly rising anti-colonial movement in India, the British Crown moved to further divide the region in what is commonly known as the “Partition of India.” With this division, two additional sovereign states were formed: the Dominion of Pakistan and the Union of India.

Peoples of similar culture and language were divided and grouped along artificial lines to create a predominantly Hindu Indian state and a Muslim-majority Pakistani state. Immediately upon partition, both nations maneuvered for control of the adjacent northern princely state of Kashmir, due to its strategic placement and rich natural resources. Although a sovereign nation, the smaller and relatively defenseless Kashmir was pressured to relinquish its sovereignty to both.

Despite the minority Hindus and Buddhists in Kashmir, Pakistan believed the region should give up its sovereignty primarily because Kashmir’s inhabitants were (and still are) predominantly Muslim. Its people shared much more in common (in language and ethnicity) with Pakistan than India. Kashmir’s Islamic population agreed.

However, as the two powers competed for control, Kashmir’s ruling prince quickly acceded to India in the face of an almost certain Muslim-led revolt and outright war in his state. As Indian forces positioned themselves in Kashmir to assume dominion, Pakistan deployed its military as well. Months of escalating tensions and the inability to resolve who would control Kashmir erupted into the Indo-Pakistani War of 1947 (also known as the First Kashmir War).

Months of fighting and thousands of casualties later, the two countries bowed to international pressure, agreeing to a United Nations-brokered peace deal. A tenuous ceasefire led to drawing new national boundaries, and Kashmir was “sliced in two”—leaving many of the disputed region’s fiercely devout inhabitants unsatisfied.

Two additional wars broke out over Kashmir in 1965 and 1971, each ending with increasingly fragile resolutions, deeper resentment and further distrust.

To this day, many Pakistanis feel the Indian government, based in New Delhi, should allow Kashmir’s overwhelmingly Islamic population to determine its own destiny by permitting residents to object to Indian rule and redraw “more appropriate” national borders. Also engulfed in the conflicts was the smaller province of Jammu, on the southern edge of Kashmir. Called “The City of Temples,” Jammu is predominantly Hindu and is the location of what are considered some of the religion’s holiest sites.

However, it is not only the “unnatural” division of the Indo-Pakistani peoples that has created resentment between the two nations. In the 1970s and 80s, Cold War politics increased regional polarization. As communism marched across post-World War II Asia, India became a burgeoning ally and valued trade partner to the Soviet Union. The United States, as a counterbalance, supported the military regimes in Afghanistan and Pakistan.

In a world forever changed by the infamous September 11 attacks, the most urgent threat to lasting peace is the growing mistrust between Pakistan and India. It is commonly understood that the rugged tribal area crossing Afghanistan and Pakistan is a staging ground for Islamic terrorists. Likewise, India has grave concerns that Kashmir’s mountainous regions are a haven for radical extremists.

On Dec. 28, 2008, U.S. President-elect Barack Obama publicly acknowledged the growing threat of terror in Asia and its potential to spread. He stated, “We can’t continue to see Afghanistan in isolation. We have to see it as part of a regional problem that includes Pakistan, includes India, includes Kashmir, includes Iran.”

India’s concern over Kashmir being a staging ground for terrorists has cemented New Delhi’s desire to assume control of the area to maintain national security.

On Dec. 13, 2001, a small group of heavily-armed Pakistani militants stormed India’s parliamentary compound, attempting to assassinate key government leaders. The plot, which left eight Indian citizens and all five terrorists dead, could have been far worse. India demanded that Pakistan take immediate and decisive action against the groups responsible. To show their seriousness, New Delhi deployed half a million Indian soldiers to the border; Pakistani forces responded in kind.

The crisis was soon averted when Pervez Musharraf, Pakistan’s president at the time, promised a government crackdown on radical groups within its borders. Nevertheless, many Indians felt as if Mr. Musharraf was only cracking down on certain groups while tacitly allowing others to continue operation.

Any hope of easing further tensions was shattered just months later, in May 2002, when militants attacked an Indian military base in Jammu, killing the wives and children of servicemen. Seen as an attack on India itself, the incident resurrected Hindu-Muslim animosity.

The international community watched as hundreds of thousands of Indian and Pakistani troops once again stared at each other across the border, this time with heightened intensity. Growing uncertainty threatened, like no other time, to “go nuclear.”

After months of hair-trigger readiness, tensions slowly eased when the Indian army was redeployed away from the border. However, decades of past bitterness remained unresolved.

Today, both countries have partial dominion over a region that each believes is rightfully theirs. Further, there remains an underlying feeling by many Indians that Pakistan has gone unpunished. In turn, Pakistan feels increasingly threatened by the presence of Indian troops amassed at the border.

Uriel Sinai/Getty Images
Tensions rise: Workers organize for reopening the site of the Leopold Café, the first target of the 2008 Mumbai terrorist attacks.

Despite recent tensions, India and Pakistan have undertaken joint trade and economic efforts. Significant strategic planning is underway and some progress has already been made. Past trade has been limited to tea, iron ore, textiles, engineering goods, and other industrial raw materials. But now more promising signs can be seen, such as the opening of bank branches within each other’s territories, and the operation of commercial trucking and bus lines crossing the border.

When preliminary peace talks began in 2004, both countries gradually lifted trade barriers and sanctions in a concentrated effort toward better relations. The results have been positive. Indian officials reported that, in the fiscal year ending in March 2007, bilateral trade between India and Pakistan was $1.67 billion—up from $850 million the previous year (International Herald Tribune).

India’s commerce secretary, Gopal Pillai, recently acknowledged the improved ties, stating, “Our bilateral trade has grown phenomenally in the past few years. According to Pakistan’s commerce secretary, Syed Asif Shah, all of this is part of an even larger effort to increase trade to $10 billion by the year 2010” (ibid.).

Past contention between the countries has delayed steps toward complete bilateral economic cooperation and the realization of free-trade in Southern Asia, including Sri Lanka, Bangladesh, Nepal, Bhutan, and the Maldives. The responsibility falls to India and Pakistan to set aside their differences for such an agreement to be realized.

Progress was seemingly shattered on Nov. 26, 2008, when a series of highly coordinated attacks were carried out in Mumbai (formerly Bombay), India’s largest city and financial capital. After three days, 173 Indians lay dead and over 300 wounded. The attacks were conducted by the terrorist organization Lashkar-e-Toiba, and were planned in Pakistan. The goal was clear: Instill as much fear and uncertainty as possible by striking at the heart of the Indian nation.

Hundreds of millions of grieving and fearful Indians lay the blame squarely at the feet of Pakistan and its inability or seeming lack of desire to respond. Seen as India’s 9/11, there were many who called for immediate military action, regardless of the collateral damage.

Behind closed doors, the Indian military considered resurrecting “Operation Cold Start,” a plan devised years ago to deal with such situations. The strategy involved deploying eight integrated battle groups and small ground incursions, along with air support for highly focused attacks, into Pakistani territory. Seen as a way to “resolve” specific targets without the need to mobilize hundreds of thousands of troops, the risks are evident. Though potentially successful at neutralizing certain groups, Pakistan’s response in having its border violated could be a direct trigger for nuclear war (Daily Times Pakistan).

He added, “We will not be the first to take any sort of misadventurism but at the same time, we are capable of defending our own dear country” (AFP).

Despite all the ongoing issues between India and Pakistan, the prime minister’s statement seems to sum up each side’s viewpoint. Their increased trade and joint economic efforts and cooperative accords will be for naught if past distrust resurfaces in the wake of the latest attacks on Mumbai.

To India, Pakistan appears lax on terror and unwilling to sufficiently deal with the problem within its borders. To Pakistan, India seems overzealous in its willingness to invade in order to prevent future Mumbai-like attacks.

One of Pakistan’s foreign ministers, Shah Mahmood Qureshi, may have best characterized the situation: “We want peace, but should not be complacent about India…We should hope for the best, but prepare for the worst” (Associated Press).

What will be the worst? Time will tell.