This website requires the use of Javascript to function correctly. Performance and usage will suffer if it remains disabled.
How to Enable Javascript
The Plight of Humanitarian Relief Efforts

The Plight of Humanitarian Relief Efforts

Will overhauling how the world community conducts its humanitarian operations solve the plight of impoverished nations? 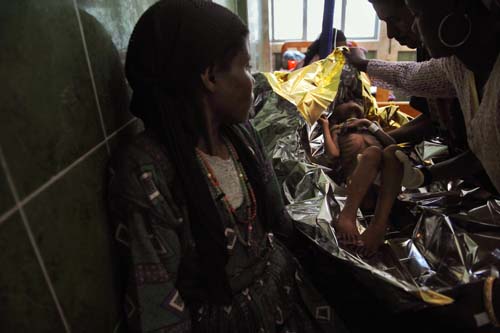 Roberto Schmidt/AFP/Getty Images
Ethiopia: In 2008, lack of rain in the main February to April wet season left at least 75,000 Ethiopian children under age five at risk from malnutrition, according to the United Nations’ Office for the Coordination of Humanitarian Affairs. It also asserted that some eight million people needed urgent food relief and another 4.6 million needed emergency assistance.

CARE, an international aid agency, is calling for the United Nations to fix a broken system of humanitarian operations worldwide. In a report titled “Living on the edge of emergency: Paying the price for inaction,” the agency explains that billions of dollars in relief funds are wasted every year.

CARE estimates that more than $180 billion will be allotted for aid by the year 2015. Despite such a large amount being available, its impact will be drastically reduced if aid groups do not rethink how they work. Despite this startling claim, the agency has solutions as to how this money can be better spent, meeting the growing rise of poverty and the increasing number of people who need help.

The System Is Broken

In an online synopsis of aid operations, CARE added, that “aid was too short-term, late and focused entirely on saving lives—not preventing situations where emergency food aid was needed.”

Instead of building the ability to cope with food emergencies, relief is simply brought in. While providing food and medicine prevents people from dying for a time, it does not prepare them for the next crisis. By spending effort and money in advance, developing farms and farming techniques, building roads, setting up trade, etc., many countries could prepare for and altogether prevent food emergencies, CARE asserts.

In 2005, the West African nation of Niger suffered a food shortage, leaving over three million people starving. During the Niger famine, it cost close to $80 per person for food and medicine to treat the effects of malnutrition. According to Ms. Rubin, this amount could have been significantly smaller. By not acting when the first appeals for aid had been issued two months prior, the cost skyrocketed. At the end of the crisis, it cost nearly $264 million for food and medicine.

“Months before…equivalent intervention would have been about $1 per day” (BBC). This would show in theory that for 3.3 million people, two months worth of aid at the latter rate would still be far less than the harsh reality of what it cost at the worst time of the crisis.

Why It Needs To Be Done Better

Looking to the future, one will see an ever-expanding number of people needing aid. In two years, “The number of people living close to the edge of extreme poverty (where basic food, water and sanitation needs cannot be met) doubled to nearly 220 million” (CARE). With such large populations facing the same dangers, and both growing simultaneously, aid agencies must be wiser about how funds are spent.

Rather than spending a large amount of money at one time during a crisis, it is more cost efficient to step in earlier. In countries where a food shortage seems imminent, preventative aid is cheaper.

Again citing Niger’s problems in 2005, Jean Senahoun, of the UN’s Food and Agriculture Organization, stated, “It (the food shortage) was very clear from October last year (2004)...The warnings were given very early” (New Scientist).

But for many in Niger, that call was heeded too late.

Combined with Ms. Rubin’s earlier statement, it shows the need for change.

• When a crisis appears imminent, have an action plan ready to bring in food aid before it is needed.

CARE’s report closed with warnings, solutions and challenges for the future. With wasted emergency funds potentially totaling billions of dollars per year, and a growing population needing assistance, wise choices are a must.

Geoffrey Dennis, the Chief Executive of CARE UK, stated, “It’s a disgrace that, despite warnings, money is still being spent in the wrong ways,” and if changes are not made to how aid is distributed, “…they will measure the cost in billions of wasted emergency funds” (CARE).