This website requires the use of Javascript to function correctly. Performance and usage will suffer if it remains disabled.
How to Enable Javascript
China’s Olympic Spectacular

A look back at the 2008 Summer Olympiad in Beijing. 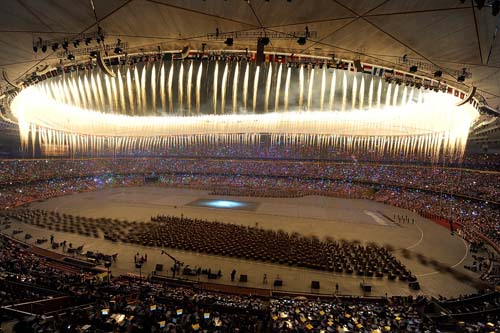 China emerged on the other side of the 29th Olympic Games a changed nation, both in its self-perception and its image in the rest of the world.

In retrospect, these were two weeks of superlatives: Commentators, watching the eye-popping Opening Ceremony, opined that it was the most important night in modern Chinese history. The television audience may have been the largest ever for a single event.

Records fell in a number of sports, including high-profile swimming and track-and-field events. China’s government spent more money on these games than in any previous Olympiad—$44 billion USD, by their official tally. And Beijing achieved clear skies, at least temporarily banishing the pervasive smog the city is known for.

The stunning, large-scale choreographed performances that book-ended the games set a high standard for spectacle. As a result, hosts of upcoming ceremonies face a serious challenge in measuring up (the Winter Games will take place in Vancouver, Canada, in 2010, followed by the London Summer Games in 2012).

Despite Western criticism regarding human-rights issues and questions about China’s forthrightness (the ages of its female gymnasts being the most nagging), the nation achieved its main objectives. Its athletes collected 51 gold medals, using a strategy of focusing on lesser-known events (the United States, while taking more total medals, settled for 36 gold).

More importantly, the nation made a powerful statement about its aspirations and capacity for achievement, letting the rest of the planet know that it has no plans to rest on its laurels as it strives toward first-world status.