This website requires the use of Javascript to function correctly. Performance and usage will suffer if it remains disabled.
How to Enable Javascript
China Unveils Itself to the World

China Unveils Itself to the World

For decades, communist China had kept to itself, keeping travelers, reporters and other countries at arm’s length. However, the nation has made sweeping changes, focusing its resources into modernizing its cities, economy and global image. With the 2008 Olympic Games, Beijing is poised to reveal 21st-century China to the world. 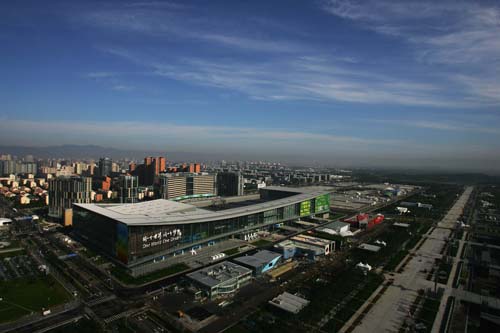 When the Sichuan region of southern China was rocked by a 7.9-magnitude earthquake in early May, it brought the world’s early focus on a nation preparing for much more attention.

The heart-wrenching footage of collapsed buildings, rescue and recovery efforts and grieving survivors opened a window to a country that has changed more in the span of a generation than others might in a century.

The People’s Republic of China now looks ahead to the Summer Olympics, kicking off on August 8, as a chance to bask in international attention. A 20-minute fireworks extravaganza, two years in the making, will begin the unveiling of a new China. Thousands of hours of media coverage will be spread over multiple television channels as well as online and mobile outlets.

The opportunity to host this international event is highly prized, especially for so-called “developing nations.”

The choice of the capital, Beijing, to host the Olympics is symbolically important. Hong Kong and Shanghai are wealthier and may be considered more cosmopolitan by many, but Beijing has a reason to reinvent and rebrand itself: The city’s name is still closely associated with the Tiananmen Square protests in June 1989, which ended with the deaths of hundreds of protesters.

China’s citizens have high expectations: “Overwhelming numbers of Chinese say next month’s Olympics will help their country’s tattered image abroad, and they predict the Beijing Games will be successful, according to a poll released Tuesday.

“Ninety-three percent of those polled said they believe the Olympics will help China’s image around the globe. A similar number voiced confidence that the games will go well: 96 percent said their hosting of the Aug. 8-24 competition will be successful.

“In both cases, the optimism was shared by people of all ages and income groups, and men and women alike.

“Eight in 10 Chinese said the Olympics were personally important to them, an enthusiasm that was slightly higher for Beijing residents than for those living elsewhere.

The government is taking drastic measures to make sure that Beijing sparkles. The city will change its working hours and limit automobile traffic to cut pollution; even industry is contributing to this effort to clean up the hazy air, which has earned the city the nickname “Grayjing.”

“Beijing Shougang Group, one of China’s leading steel makers and the city’s major polluter, has extinguished the fire in three of its four blast furnaces at its Beijing plants. The plants have slashed monthly production to 200,000 tonnes in the third quarter, said group president Zhu Jimin. ‘This is about 29 percent of our normal output’” (China Daily).

Protests will be permitted, but closely regulated and confined to a designated area. Security will be tight, with 100,000 soldiers as well as tens of thousands of police and volunteers keeping watch over the events.

Even forces of nature are being addressed with resolve and massive manpower. An algae bloom that clogged the coastal waters where sailing competitions will be held was cleaned up by 10,000 volunteers. And measures are being taken to divert a possible invasion of locusts from the north, with over 30,000 exterminators called from around the country being sent to contain the swarm.

The massive efforts to project a world-class image are a condensed picture of China’s new status and capabilities. After Beijing finishes the scramble to provide the perfect venue, what will the Olympic spotlight reveal? The curtain will rise on a country that has grown at warp speed.

“After nearly three decades of uninterrupted economic expansion, and five straight years of double-digit-plus increases in output, China has become a motor of growth for the global economy and is on the verge of becoming the largest trading nation in the world” (Financial Times).

China is now considered the world’s fourth-largest economy, behind the United States, Japan and Germany. Its steel production outpaces these latter three nations—combined. China’s exports have grown more than 500% since 1992. According to PriceWaterhouseCoopers, it will be the largest economy on earth by 2025.

On the technological front, the country is now home to more Internet users than any other, including the United States—around 253 million according to government estimates. It is also a huge new market for personal tech items such as cellphones, as many Chinese transition from having no telephones directly to mobiles, skipping the old-fashioned landline step altogether.

It holds some of the fastest-growing urban areas in the world, including Beihai, Wenzhou, Chongqing, Wuhan and Shenzhen.

A vast income gap between city dwellers and the rural poor is driving a massive influx into cities—for example, Chongqing absorbs around half a million new residents each year. High-rise apartment towers sprout like fast-growing weeds to receive them. By 2030, an estimated two-thirds of China’s population will live in cities.

Elsewhere in the realm of outsize-scaled construction, The Three Gorges Dam, which will harness the energy of the Yangtze River and allow oceangoing ships to reach China’s interior, is one of the largest engineering projects in history.

Arrival of Middle and Upper Classes

The introduction of free-market policies in 1978 is credited for much of China’s progress. Having moved away from the Communist model in economics (but not politics), personal wealth is now a possibility for growing numbers, almost always those in cities.

Getty Images
Pollution: A view of the Shougang steelworks spewing pollution in the western suburbs of Beijing. Since Beijing’s successful bid for the 2008 Olympic Games, the steelworks have been gradually reduced to less than 30% operating capacity.

Western luxury brands are targeting this new market for their wares. Imports from the United States or Europe are status symbols for China’s upper class. Buicks are now the most sought-after vehicle in China, along with BMWs and other European models.

China has, as described in a recent Discovery Channel miniseries, “The largest population in the world competing for very limited resources.” This translates to intense pressure on children to perform in school and to achieve success equal to or greater than their parents—to join or stay in the middle class, or to move to the upper class. English literacy and computer skills are a focus of education.

China is by no stretch a utopia. The size of China’s population is beyond what the government can manage, even with a mandatory one-child-per-family policy in place. To govern 1.3 billion human beings, spread unevenly across an area slightly smaller than the United States, is a challenge that would be impossible for even the most efficient and well-funded state to surmount. And the pollution caused by rapid industrial growth is some of the world’s worst.

Nonetheless, in another recent Pew Research Center poll, 86% of respondents expressed satisfaction with the direction of the country—a number virtually unheard of in Western nations, despite their higher standard of living.

Meanwhile, in the Western Hemisphere…

Many in North America are only now learning of these historic developments on the other side of the world. After reading the ever-present “Made in China” labels on retail goods for years, many Americans have seen their jobs taken by China. U.S. manufacturers find it nearly impossible to compete in a global economy without outsourcing at least a portion of work there, where a worker’s wage may be less than USD $100 per month.

The nation has become the world’s production plant—known for consistent and inexpensive labor. But all those goods must go somewhere. Inflation, energy costs, the housing downturn and other factors mean that the United States can no longer buy so much of what China offers.

Accordingly, the mood of the United States, according to polls, could not be much farther from that of China. Pollsters at Gallup recently determined that 94% of Americans are dissatisfied with “the way things are going” in their country. The two countries now follow opposite trajectories.

If America can no longer be the consumer engine that drives the global economy, another nation or nations must step into this role.

The U.S. would like China to cast itself in a Western image more quickly—moving toward fully democratic elections, and tolerating virtually all forms of dissent.

But China is already looking past Uncle Sam’s approval and patronage. The European Union has surpassed the U.S. as a customer for Chinese products, just as the Gross Domestic Product of the EU is moving ahead of America’s. And China is not afraid to publicly chastise Washington. Foreign Ministry Spokesman Liu Jianchao, responding to a U.S. House of Representatives resolution that criticized China’s human rights record, said, “We suggest some US lawmakers immediately stop their wrong words and deeds aimed at disrupting the Beijing Olympic Games by using the human rights issue so as to avoid harming the healthy, stable development of China-US relations” (Xinhua).

The recent breakdown of the Doha trade talks, due in large part to an impasse between America and China, are another example of growing friction.

The Future of the Far East

World power status is not new to China—its largest ethnic group still refers to itself as “the people of Han,” after the Han dynasty’s empire, founded around 200 B.C.

Will this nation, whose name in Mandarin translates to “The Middle Kingdom,” see another age of glory? Can this be known in advance?

Few are aware that the headlines now written about great nations such as China have been foretold for millennia. A book written many years ago predicted that the Western world, particularly America and the nations formerly of the British Empire, would cease to be superpowers. After a long run as the standard bearers of “First World” power and prosperity, they will be overshadowed and dominated by other regions of the world, drastically changing the existing balance of power.

The Bible—though dismissed by many as a collection of fables for the superstitious—speaks of three power blocs at the end of the age that will vie for influence. Two are symbolically known as the “king of the North” and the “king of the South” (Dan. 11). But the West is not mentioned as a major player on the world scene—because it no longer will be!

A third power is described in Revelation: “And the sixth angel poured out his vial upon the great river Euphrates; and the water thereof was dried up, that the way of the kings of the east might be prepared” (Rev. 16:12). This will be a confederation of Asian nations, with China almost certainly among them.

As reality aligns with Bible prophecy in the years ahead, will you remain a skeptic? Can you afford to dismiss history written in advance? The publishers of The Real Truth urge you to learn what can be known about the future!